When It Comes to Infant Language Development, Not All Toys Are Created Equal. It’s now well-known that early language development is crucial to a child’s long-term academic success. 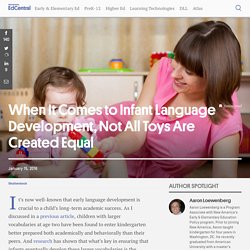 As I discussed in a previous article, children with larger vocabularies at age two have been found to enter kindergarten better prepared both academically and behaviorally than their peers. And research has shown that what’s key in ensuring that infants eventually develop these larger vocabularies is the quality and quantity of language heard from caregivers during the first months and years of their lives. Simply put, the more words an infant hears from caregivers, the more they are engaged in back-and-forth interactions, the better her language development will be. But what role do toys play in language learning? Can something as simple as the type of toy an infant plays with affect language development? After the parent-infant pairs had a chance to play with all three different toy sets researchers analyzed the data captured by the recording device. Tech Goes Home: Learning Together / News & Announcements / HFRP News.

Tech Goes Home: Learning Together Look around while you are walking down the street or using public transportation―technology is a dominant force in our everyday lives. 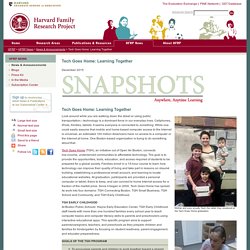 Cellphones, iPods, Kindles, tablets: It seems everyone is connected to something. While one could easily assume that mobile and home-based computer access to the Internet is universal, an estimated 100 million Americans have no access to a computer or the Internet at home. Technology in Early Childhood. The Touch-Screen Generation. Seeding Reading. Seeding Reading Articles Pediatricians Use Video Tools to Promote Early Literacy by Sarah Jackson – June 22, 2014Summer Learning: Literally Meeting Children Where They Are by Abbie Lieberman – June 11, 2014 Introduction to Seeding Reading Today’s children are surrounded by digital media of all kinds. 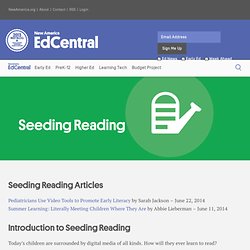 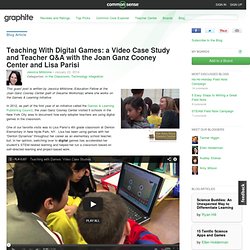 In 2012, as part of the first year of an initiative called the Games & Learning Publishing Council, the Joan Ganz Cooney Center visited 5 schools in the New York City area to document how early-adopter teachers are using digital games in the classroom. One of our favorite visits was to Lisa Parisi’s 4th grade classroom at Denton Elementary in New Hyde Park, NY. Lisa has been using games with her “Denton Dynamos” throughout her career as an elementary school teacher, but, in her opinion, switching over to digital games has accelerated her student’s STEM-related learning and helped her run a classroom based on self-directed learning and project-based work. In the video, Lisa references using BrainPop in her classroom, as well as MangaHigh. Click through to read the Graphite reviews of these titles. Teaching With Digital Games: a Video Case Study and Teacher Q&A with the Joan Ganz Cooney Center and Lisa Parisi.

One of the things I enjoy about exploring mathematics with young mathematicians is their excitement and authentic, genuine mindset in regards to learning. I am energized by their discoveries when they are exploring new concepts. Connections are made easily and this inspires students to look deeper. I also enjoy the many technologies that help me to capture my students mathematical understanding. Technology helps give everyone a voice. Roundtable on the Science of Digital Media and Early Learning. On October 15, the New America Foundation and the Alliance for Early Learning in a Digital Age brought researchers together to examine what current science tells us about how and if young children learn from digital media -- and what begs more research. 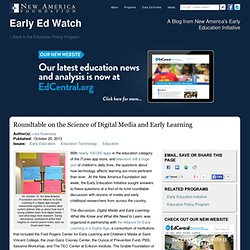 During discussions, participants jotted their insights on colorful post-it notes, such as those seen here. With nearly 100,000 apps in the education category of the iTunes app store, and television still a huge part of children’s daily lives, the questions about how technology affects learning are more pertinent than ever.

At the New America Foundation last week, the Early Education Initiative sought answers to these questions at a first-of-its-kind roundtable discussion with dozens of media and early childhood researchers from across the country. Our primary aim was to use findings from recent research to trigger deeper conversations about technology and young children. To start the ball rolling, discussion centered on two questions: Resources - Tech for the Early Years Conference, October 17-18, 2013 - Erikson Institute. Recordings & Slides.

Every session in the Early Childhood Investigations Webinar Series is recorded. 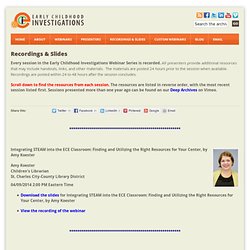 All presenters provide additional resources that may include handouts, links, and other materials. The materials are posted 24 hours prior to the session when available. Recordings are posted within 24 to 48 hours after the session concludes. Scroll down to find the resources from each session. The resources are listed in reverse order, with the most recent session listed first. Integrating STEAM into the ECE Classroom: Finding and Utilizing the Right Resources for Your Center, by Amy Koester. Using Developmentally Appropriate Practice with Early Learners to Evaluate Apps- A TEC Track Webinar by Gail Lovely. Effective, Appropriate, & Intentional Use of Technology Tools in ECE Classrooms- A TEC Track Webinar by Mark Bailey and Aja Appel. Presenters Date: February 20, 2013 2:00 PM Eastern Time This session is part of the TEC Track Series of webinars offered by the TEC Center at Erikson Institute. 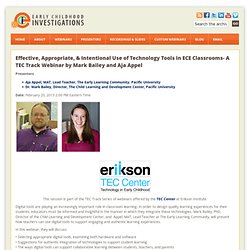 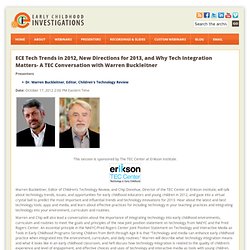 Warren Buckleitner, Editor, Children's Technology ReviewDate: October 17, 2012 2:00 PM Eastern Time This session is sponsored by The TEC Center at Erikson Institute. Warren Buckleitner, Editor of Children’s Technology Review, and Chip Donohue, Director of the TEC Center at Erikson Institute, will talk about technology trends, issues, and opportunities for early childhood educators and young children in 2012, and gaze into a virtual crystal ball to predict the most important and influential trends and technology innovations for 2013. 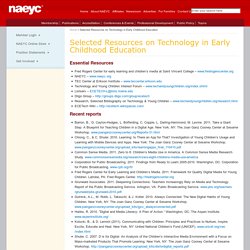 Cayton-Hodges, L. Bofferding, C. Copple, L. Www.naeyc.org/files/naeyc/PS_technology_Examples. Using Ele™, a Free Online Tool, to Incorporate Principles from NAEYC and the Fred Rogers Center into Your Program. Presenters Michael Robb, Ph.D., Director of Education and Research , Fred Rogers Center for Early Learning and Children’s MediaDate: September 12, 2012 2:00P M Eastern Time This webinar is sponsored by the TEC Center at Erikson Institute. The NAEYC/Fred Rogers Center joint position statement on technology and media in ECE is great…. but now what? Join Michael Robb and Chip Donohue for a discussion of how free online tools can be used in ways that support the recommendations of the position statement.

In this session you will learn how to use an exciting new resource, the Early Learning Environment™, (Ele) in ways to promote professional development, classroom learning, and school-home connections. This webinar will include a live demonstration of Ele that will introduce participants to the site, In this practical webinar, you will learn: See the other webinars we offer. Www.earlychildhoodwebinars.org/wp-content/uploads/2012/06/Using-Ele-Early-Childhood-Invesigations-Webinar-09-12-12.pdf. Resources - Tech for the Early Years Conference, October 17-18, 2013 - Erikson Institute. Roundtable on the Science of Digital Media and Early Learning. Peg + Cat. The Peg + Cat on-air series and online resources provide many opportunities for educators to introduce or reinforce early math concepts. In each 11-minute on-air episode of this animated, math-based series for 3-8 year olds, Peg and Cat find themselves thrust into the middle of a wacky word problem.

This problem isn’t just an academic exercise for them—it’s a messy, funny, real-life crisis they have to solve to get out of trouble. Peg and Cat grapple with all kinds of loopy obstacles under intense time pressure. They write out diagrams and charts on the graph paper that comprises their background. They interact with one another in their own quirky, comical way. The resources in this collection help you explore the concepts introduced in Peg + Cat with activity ideas, video clips, and online games. The Source of Technology Implementation Leadership: You! Www.earlychildhoodwebinars.org/wp-content/uploads/2012/10/Digital-and-DAP-webinar-2012-Final.pdf.

Why a survey? Over the past several years, collectively and independently, we have researched and written about the use of technology in early childhood programs. As a result of our work, we’ve encountered many questions about how the proliferation of technology tools is impacting early learning classrooms and programs. We launched this collaborative to gather information on particular focus areas that have not been addressed in the current literature or collected in other recent surveys. The results of the surveys will are now being made public through articles in journals, blog posts, and other publications. If you would like more details about how we intend to use the data, please check out the FAQs. Www.ecetech.net/wp-content/uploads/2013/09/FINAL-213-Simon-Nemeth-McManis-Exchange-Mag-sept-october-2013.pdf.

Www.naeyc.org/files/naeyc/12_KeyMessages_Technology. Www.naeyc.org/files/naeyc/PS_technology_WEB. Long-Awaited Guidance on Using Technology in the Classroom. The last time the National Association for the Education of Young Children took a position on teaching with technology it was 1996. The Web was only a few years old, portable music meant the Sony Walkman, and Einstein was still that physics genius with the mustache, not a line of DVDs for babies.

But finally, 16 years later and after more than two years of drafts, discussion and often heated debates at annual meetings, the association has published a new statement on how educators should use technology with young children. (The New America Foundation was among the many organizations that made recommendations.) The Fred Rogers Center for Early Learning and Children's Media – an organization dedicated to continuing the values embodied in Mister Rogers' Neighborhood – was a partner in the effort. Technology and Young Children. Key Messages When used intentionally and appropriately, technology and interactive media are effective tools to support learning and development. Intentional use requires early childhood teachers and administrators to have information and resources regarding the nature of these tools and the implications of their use with children.

Limitations on the use of technology and media are important. Special considerations must be given to the use of technology with infants and toddlers. Exclusive: Samuel L. Jackson's Message for Parents. We at Common Sense Media love entertainment. 10 Emerging Educational Technologies & How They Are Being Used Across the Globe. For over a decade, the New Media Consortium (NMC) has been charting the landscape of emerging technologies in teaching, learning, and creative inquiry on a global scale. Field-Testing the Math Apps. Next Generation Preschool Math. Math Apps, Preschoolers and Framing New Research Questions. Image captured from video by Next Generation Preschool Math. For the past two years, I’ve been following the creation and development of Next Generation Preschool Math, a research and development project funded by the National Science Foundation.

Newsletter for Educators - September 2013. 10 Emerging Educational Technologies & How They Are Being Used Across the Globe. Lisa Guernsey: Saying Yes to Digital Media in Preschool and Kindergarten. You, a parent of young children, may be tethered to your phone, iPad and laptop. But you cringe at the thought of touchscreens and apps slinking into your children’s preschool classrooms. iPads in the Classroom and Media Mentors. Is it just me, or has there been a shift lately in the way people talk about technology and young children? Take a Giant Step: A Blueprint for Teaching Young Children in a Digital Age.

In January 2010, the Cooney Center, in collaboration with the Stanford Educational Leadership Institute, convened a Digital Age Teacher Preparation Council, co-chaired by Linda Darling-Hammond of Stanford University and Michael H. Levine, the Cooney Center’s Executive Director, at Sesame Workshop. Sites/newamerica.net/files/profiles/attachments/Guernsey_Head_Start_Leadership_Institute_Presentation_on_EarlyEd_Trends_and_Screen_Time_2013.pdf. IPads in the classroom: The right way to use them, demonstrated by a Swiss school. Long-Awaited Guidance on Using Technology in the Classroom. Computers in the classroom: Necessary? - On Parenting. In a few days I will visit my daughter’s kindergarten classroom and I expect to flinch at the presence of computers. Just as I did last year in her pre-K classroom, and as I do every time I hit the children’s section of the local libraries.

I’m in the camp that would rather have children avoid computer use in the early grades, and instead focus on the social and creative skills that come with traditional play. I know many think this opinion is outdated, including the leaders of our school’s PTA, who raised considerable amounts of money to buy more technology for the elementary school. These two factions have squared off in the world of private schools, as the Post’s Cecilia Kang recently documented iin a story about two highly regarded schools, one high-tech, the other low tech. More on Toddlers, Touchscreens and Learning. In the cover story of this month’s Atlantic magazine, writer Hanna Rosin plunges into the sensitive and scintillating topic of parenting via the iPad.