A Cinnamon Chicken Recipe From Runner's World.com. "This dish is low in fat because I use olive oil instead of butter or cream," says Cora. 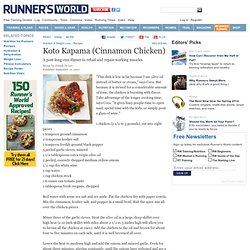 A Spicy Salmon Lettuce "Gyros" Recipe From Runner's World.com. As a child, Cora learned to cook in her family's Greek restaurant in Jackson, Mississippi, and discovered affinities between Greek and southern cuisines, such as braising meat and emphasizing fresh ingredients like corn, tomatoes, and watermelon. 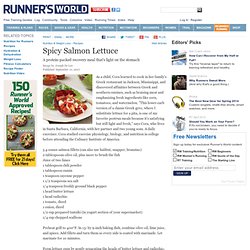 "This lower-carb version of a classic Greek gyro, where I substitute lettuce for a pita, is one of my favorite postrun meals because it's satisfying but still light and fresh," says Cora, who lives in Santa Barbara, California, with her partner and two young sons. A daily exerciser, Cora studied exercise physiology, biology, and nutrition in college before attending the Culinary Institute of America. Preheat grill to 400°F. In 13- by 9-inch baking dish, combine olive oil, lime juice, and spices. Add fillets and turn them so every side is coated with marinade. Form lettuce cups by gently separating the heads of butter lettuce and radicchio.

Brush fillets with olive oil before placing them on the grill. Street Corn. A Recipe For Seasonal Fruit Smoothie From Runner's World.com. You won't ever catch Iron Chef Cat Cora snacking on a sports bar. 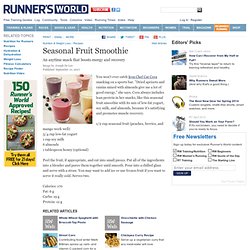 "Dried apricots and raisins mixed with almonds give me a lot of good energy," she says. Cora always includes lean protein in her snacks, like this seasonal fruit smoothie with its mix of low-fat yogurt, soy milk, and almonds, because it's satisfying and promotes muscle recovery. 1/2 cup seasonal fruit (peaches, berries, and mango work well)3/4 cup low-fat yogurt1 cup soy milk6 almonds1 tablespoon honey (optional) Peel the fruit, if appropriate, and cut into small pieces. Put all of the ingredients into a blender and puree them together until smooth. Calories: 170Fat: 6 gCarbs: 19 gProtein: 12 g Street Corn Contributing food writer Mark Bittman spices up carb- and vitamin C-packed corn for a healthy postrun side dish. A Runner's Recipe For Curried Lentils with Butternut Squash From Runner's World.com. "For such a homey, healthy dish, this dinner has a lot of pizzazz, thanks to the fresh ginger, curry, and chili powder," says Cora. 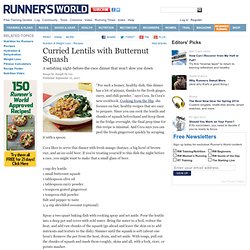 In Cora's new cookbook, Cooking from the Hip, she focuses on fast, healthy recipes that are easy to prepare. Since you can cook the lentils and chunks of squash beforehand and keep them in the fridge overnight, the final prep time for this recipe is minimal. And Cora says you can peel the fresh gingerroot quickly by scraping it with a spoon. Cora likes to serve this dinner with fresh mango chutney, a big bowl of brown rice, and an ice-cold beer. If you're treating yourself to this dish the night before a race, you might want to make that a small glass of beer. 1 cup dry lentils1 small butternut squash1 tablespoon olive oil1 tablespoon curry powder1 teaspoon grated gingerroot1 teaspoon chili powderSalt and pepper to taste1/4 cup shredded coconut (optional) Spray a two-quart baking dish with cooking spray and set aside.

Preheat the oven to 400°F. Street Corn. A Recipe For Basque Grilled Vegetable Kabobs with Key Lime Chimichurri from Runner's World.com. One of Cora's simple tricks to add taste without calories is to use vinegars and citrus juices, as in these vegetable kabobs. 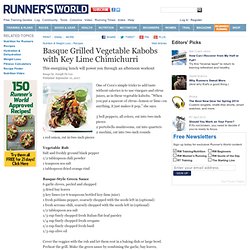 "When you put a squeeze of citrus--lemon or lime--on anything, it just makes it pop," she says. A Recipe For Walnut and Blueberry Bran Pancakes from Runner's Wo. "If you cook with flavor," says Iron Chef Cat Cora, "then the nutrition will naturally follow. 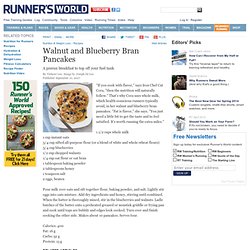