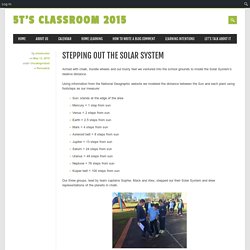 Using information from the National Geographic website we modeled the distance between the Sun and each plant using footsteps as our measure: Sun: stands at the edge of the areaMercury = 1 step from sunVenus = 2 steps from sunEarth = 2.5 steps from sunMars = 4 steps from sunAsteroid belt = 8 steps from sunJupiter = 13 steps from sunSaturn = 24 steps from sunUranus = 49 steps from sunNeptune = 76 steps from sunKuiper belt = 100 steps from sun Our three groups, lead by team captains Sophie, Mack and Alex, stepped our their Solar System and drew representations of the planets in chalk. As a class we then analysed our models and noticed that each teams planets were not the same distance from the sun, then came the questions… ‘Why was this so?”

We concluded that each person has a different sized step, with some people talking short steps and others longer steps. 20 Outer Space Themed Activities for Kids. Disclosure: Paramount Pictures compensated me for this post. 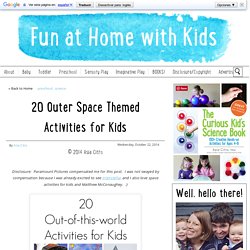 I was not swayed by compensation because I was already excited to see Interstellar and I also love space activities for kids and Matthew McConaughey. :) Today I'm sharing a compilation of the COOLEST outerspace-themed activities for kids to get you all pumped for the upcoming release of the new Paramount Pictures movie Interstellar. To get the full details for each activity, click on the name of the activity listed below the set of photos. And don't forget to check out the Interstellar movie trailer at the end - doesn't it look SO good? How does CERN encourage women in science? In physics, as in other sciences, there is often a huge gap between the number of men and women. 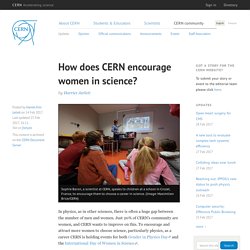 Just 20% of CERN's community are women, and CERN wants to improve on this. To encourage and attract more women to choose science, particularly physics, as a career CERN is holding events for both Gender in Physics Day (link is external) and the International Day of Women in Science (link is external). Last week, female scientists working at CERN visited local schools, to try to inspire the next generation of women in science. 35 women who have careers as physicists, engineers and computer scientists at CERN and are fascinated by the world of science, went to speak to the pupils.

The women first introduced the students to CERN, and then explained their everyday work and how they became a part of this huge community. Additionally, on 27 January 2017, over 100 participants gathered for the fourth Gender In Physics Day.

Οξέα - Βάσεις - Άλατα. Teaching and learning theories. ART. LIGO-T1400765-v1: Swing into the Scientific Method. Popcorn Neutrinos. Printable Versions: DOC | PDF (Thanks to Steve Stevenoski and Eric Muhs, United States) Lesson at a glance By measuring popcorn before and after popping, students will investigate the concepts behind beta decay, neutrinos and the South Pole IceCube Project that is searching for neutrino sources in the universe. 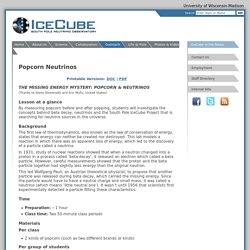 Background The first law of thermodynamics, also known as the law of conservation of energy, states that energy can neither be created nor destroyed. In 1931, study of nuclear reactions showed that when a neutron changed into a proton in a process called ‘beta decay’, it released an electron which called a beta particle. This led Wolfgang Pauli, an Austrian theoretical physicist, to propose that another particle was released during beta decay, which carried the missing energy. Ένας κατάλογος ιδεών από όλο τον κόσμο. Ένας κατάλογος ιδεών από όλο τον κόσμο.

OPTICS. Forces. ARDUINO. Neutrinos, the Standard Model misfits. Neutrinos are as mysterious as they are ubiquitous. 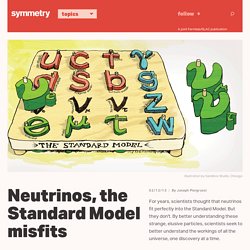 One of the most abundant particles in the universe, they pass through most matter unnoticed; billions of them are passing harmlessly through your body right now. Their masses are so tiny that so far no experiment has succeeded in measuring them. They travel at nearly the speed of light—so close, in fact, that a faulty cable connection at a neutrino experiment at Italy’s Gran Sasso National Laboratory in 2011 briefly led to speculation they might be the only known particle in the universe that travels faster than light.

Physicists have spent a lot of time exploring the properties of these invisible particles. The ABCs of Particle Physics: Y-Z. Accelerators and black holes and cryostats, oh my! 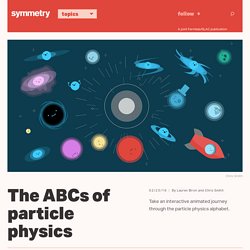 We know particle physics can seem daunting at times, but everything’s more fun to learn when it rhymes. So we’re breaking it down, letter by letter, with hopes that you’ll understand physics much better. That’s right: Inspired by children’s books, we’ve pulled 26 of our favorite particle physics concepts into a short, rhyming collection for folks of all ages. You’ve heard “A is for apple,” but here at Symmetry, A is also for accelerator.