Claude Lévi-Strauss. Biography Early life, education, and career Claude Lévi-Strauss was born to French Jewish parents who were living in Brussels at the time, where his father was working as a portrait painter.[10] He grew up in Paris, living on a street of the upscale 16th arrondissement named after the artist Claude Lorrain, whose work he admired and later wrote about.[11] During the First World War, he lived with his maternal grandfather, who was the rabbi of the synagogue of Versailles.[12] He attended the Lycée Janson de Sailly and the Lycée Condorcet. 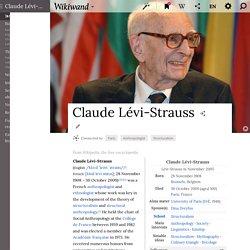 At the Sorbonne in Paris, Lévi-Strauss studied law and philosophy. He did not pursue his study of law, but passed the agrégation in philosophy in 1931. In 1935, after a few years of secondary-school teaching, he took up a last-minute offer to be part of a French cultural mission to Brazil in which he would serve as a visiting professor of sociology at the University of São Paulo while his then wife, Dina, served as a visiting professor of ethnology. 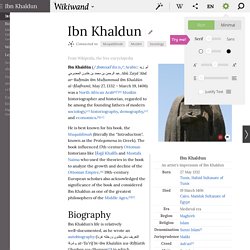 Generally known as "Ibn Khaldūn" after a remote ancestor, he was born in Tunis in AD 1332 (732 A.H.) into an upper-class Andalusian family of Arab descent,[14][15][16] the Banu Khaldun. George Eliot. English novelist, essayist, poet, journalist, and translator Mary Ann Evans (22 November 1819 – 22 December 1880; alternatively Mary Anne or Marian[citation needed]), known by her pen name George Eliot, was an English novelist, poet, journalist, translator and one of the leading writers of the Victorian era. 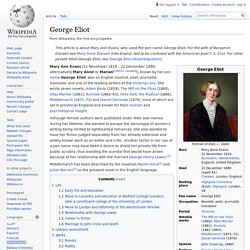 She wrote seven novels, Adam Bede (1859), The Mill on the Floss (1860), Silas Marner (1861), Romola (1862–63), Felix Holt, the Radical (1866), Middlemarch (1871–72) and Daniel Deronda (1876), most of which are set in provincial England and known for their realism and psychological insight. Although female authors were published under their own names during her lifetime, she wanted to escape the stereotype of women's writing being limited to lighthearted romances. She also wanted to have her fiction judged separately from her already extensive and widely known work as an editor and critic. Life[edit] Early life and education[edit] Relationship with George Lewes[edit] Works[edit] Frankfurt School. 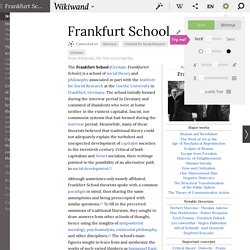 The Institute for Social Research (Institut für Sozialforschung) was founded in 1923 by Carl Grünberg, a Marxist legal and political professor at the University of Vienna,[10] as an adjunct of the University of Frankfurt; it was the first Marxist-oriented research center affiliated with a major German university.[3] However, the school can trace its earliest roots back to Felix Weil, who used money from his father's grain business to finance the Institut.

Weil (1898-1975), a young Marxist, had written his doctoral thesis (published by Karl Korsch) on the practical problems of implementing socialism. Indian Rebellion of 1857. Apollonius of Perga. The conic sections, or two-dimensional figures formed by the intersection of a plane with a cone at different angles. 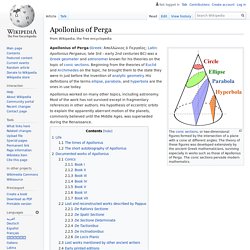 InOurTime 20130523. Mars. Fourth planet from the Sun in the Solar System Mars can easily be seen from Earth with the naked eye, as can its reddish coloring. 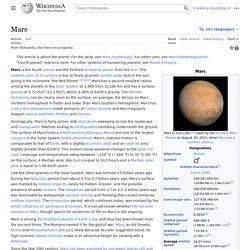 Its apparent magnitude reaches −2.94, which is surpassed only by Venus, the Moon and the Sun.[12] Optical ground-based telescopes are typically limited to resolving features about 300 kilometres (190 mi) across when Earth and Mars are closest because of Earth's atmosphere.[43] Names In English, the planet is named for the Roman god of war,[44] an association made because of its red color, which suggests blood.[45] The adjectival form of Latin Mars is Martius,[46] which provides the English words Martian, used as an adjective or for a putative inhabitant of Mars, and Martial, used as an adjective corresponding to Terrestrial for Earth.[47] In Greek, the planet is known as Ἄρης Arēs, with the inflectional stem Ἄρε- Are-.[48] From this come technical terms such as areology, as well as the adjective Arean[49] and the star name Antares. Physical characteristics Soil. Judas Maccabeus. Judea under Judah Maccabee Judah Maccabee (or Judas Maccabeus, also spelled Machabeus, or Maccabaeus, Hebrew: יהודה המכבי, Y'hudhah HaMakabi) was a Jewish priest (kohen) and a son of the priest Mattathias. 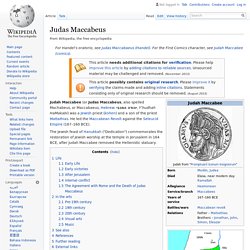