Turn Your Raspberry Pi Into An NAS Box. Do you have a couple of external hard drives lying around and a Raspberry Pi? 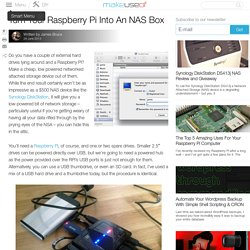 Make a cheap, low powered networked attached storage device out of them. While the end result certainly won’t be as impressive as a $500 NAS device like the Synology DiskStation, it will give you a low-powered bit of network storage – particularly useful if you’re getting weary of having all your data rifled through by the prying eyes of the NSA – you can hide this in the attic. You’ll need a Raspberry Pi, of course, and one or two spare drives. Smaller 2.5″ drives can be powered directly over USB, but we’re going to need a powered hub as the power provided over the RPi’s USB ports is just not enough for them. Alternatively, you can use a USB thumbdrive, or even an SD card. With just one drive, you can still make a shared network storage area, but with two you’ll be able to setup data redundancy in case one fails.

Prepare Your Drives Start by formatting your drives as NTFS from a desktop. Sudo -i passwd root Samba. DIY NAS: 2015 Edition - Brian's Blog. Update (02/01/2015): Congratulations to Carl Floyd for winning the #FreeNASGiveaway for his Google+ share of this blog. 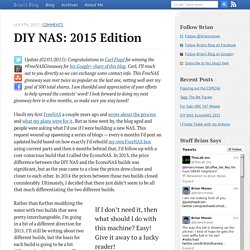 Carl, I’ll reach out to you directly so we can exchange some contact info. This FreeNAS giveaway was over twice as popular as the last one, netting well over my goal of 500 total shares. I am thankful and appreciative of your efforts to help spread the contests’ word! I look forward to doing my next giveaway here in a few months, so make sure you stay tuned! I built my first FreeNAS a couple years ago and wrote about the process and what my plans were for it.

Rather than further muddying the water with two builds that were pretty interchangeable, I’m going in a bit of a different direction for 2015. I’m quite happy with my own 2-year-old FreeNAS machine; I’ve actually added some drives to it recently, so I’m in no hurry to replace it. CPU & Motherboard The motherboard selection is probably the most important choice that’s made when building your FreeNAS machine. Case. The eTeknix Guide To Building Your Own NAS System For Under $220 - Page 4 of 7. We are choosing to use FreeNAS in our DIY NAS and the reasons for this are multiple. 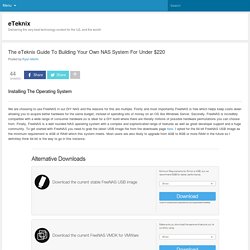 Firstly and most importantly FreeNAS is free which helps keep costs down allowing you to acquire better hardware for the same budget, instead of spending lots of money on an OS like Windows Server. Secondly, FreeNAS is incredibly compatible with a wide range of consumer hardware so is ideal for a DIY build where there are literally millions of possible hardware permutations you can choose from. Finally, FreeNAS is a well rounded NAS operating system with a complex and sophisticated range of features as well as great developer support and a huge community. To get started with FreeNAS you need to grab the latest USB image file from the downloads page here.

I opted for the 64 bit FreeNAS USB image as the minimum requirement is 4GB of RAM which this system meets. For Home. Choosing the Best Hardware for a Custom NAS Box Build - fanart.tv. You won’t need high end hardware to create a NAS media server since it is just holding and sharing your data along with some minor tasks that usually won’t need much CPU power. 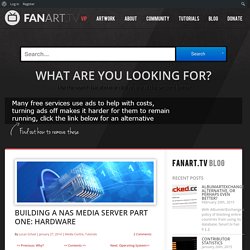 Mainboard The mainboard is the heart of our server. The more SATA ports you have, the more drives you can connect. A good choice is a Gigabyte Z87X-UD3H. It has 8 onboard SATA 6GB/s connectors. Also, you can have up to 10 USB3 ports. If you don’t care about data loss, you can run from a single drive and merge folders together with symbolic links to have a readable share for all files in one place. The specifications of the Gigabyte Z87X-UD3H and another pretty good option the ASRock C2750D4I are below: Gigabyte Z87X-UD3H ATXSocket 1150Intel Z87 Express Chipset1x1000Mbit Intel GbE LAN chip3xPCI Express x13xPCI Express x16Up to 32GB DDR3 RAM4xPWM ASRock C2750D4I When you run your NAS 24/7 and want to have it in your living room you should consider using a passive CPU cooler.