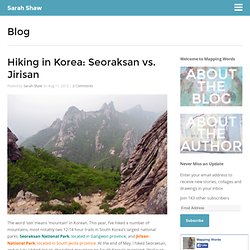 This year, I’ve hiked a number of mountains, most notably two 12-14 hour trails in South Korea’s largest national parks: Seoraksan National Park, located in Gangwon province, and Jirisan National Park, located in South Jeolla province. At the end of May, I hiked Seoraksan, and in July, I hiked Jirisan, the tallest mountain on South Korea’s mainland. (Hallasan, on Jeju Island, is the tallest.) This post will compare hiking the winding Dinosaur Ridge trail on Seoraksan to the equally challenging Jirisan hike, in terms of scenery, time, conditions, physical rating and area surrounding the mountain. Although there are a number of ways to hike each mountain, I will comment on my experience hiking the longer, more challenging route. Camping and Hiking in Odaesan National Park, Gangwon Do, South Korea. This trip was to first camp at Dongpigol Campground on the first day and get an early start the next day for a 'horseshoe ridge' traverse from Birobong Peak to Dongdaesan Peak. 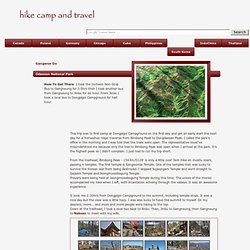 I called the park's office in the morning and I was told that the trails were open. The representative must've misunderstood me because only the trail to Birobong Peak was open when I arrived at the park. It's the highest peak so I didn't complain. I just had to cut my trip short. From the trailhead, Birobong Peak - 1563m/5128' is only a little over 3km-hike on mostly stairs, passing 4 temples. Odaesan National Park - Hiking in South Korea. Most of the routes at Odaesan are day hikes. 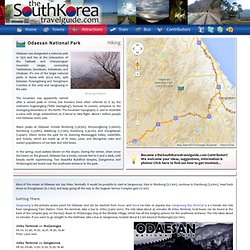 Normally it would be possible to start at Sangwonsa, hike to Birobong (3.5 km), continue to Durobong (5.4 km), head back down to Dongdaesan (6.7 km), and keep going all the way to the Sogeum Service Complex gate (15 km). Getting There Gangneung is the primary access point for Odaesan and can be reached from Busan and Seoul via train or express bus. Gangneung Bus Terminal is a 5 minute taxi ride from Gangneung Train Station. Présentation des régions. Recommended Hiking Course! The Seoraksan Mountain Autumn Foliage Hiking Course. Journey through the Forests of Mount Jirisan A time of refreshment and reflection. Exploring Ulleungdo Island: A volcanic island formed by wind & fire. Recommended Hiking & Trekking Trails in Korea. Autumn Getaway Spots. Korea National Park. Korea National Park. Georim Course [Jirisan] Travel Time : 7 hours 30 minutes Distance : 16.5Km Georim means “a valley of gigantic forests”. 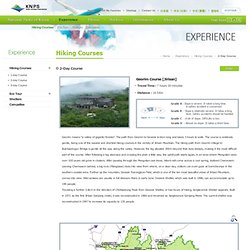 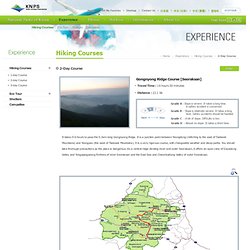 It is a junction point between Yeongdong (referring to the east of Taebaek Mountains) and Yeongseo (the west of Taebaek Mountains). It is a very rigorous course, with changeable weather and steep paths. Korea National Park. Hangyeryeong Pass Course [Seoraksan] Travel Time : 13 hours 20 minutes Distance : 19.3 ㎞ 1,004m-high Hangyeryeong Pass is the junction point between Yeongdong and Yeongseo and between inner Seoraksan and outer Seoraksan. 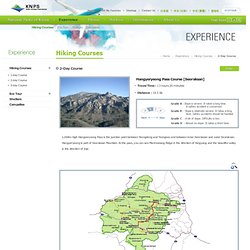 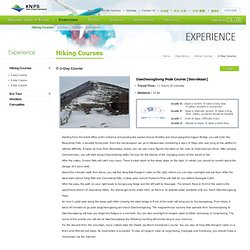 Even the handicapped can go to Waseondae (containing a story of Mago who was lying on the platform) without difficulty. It takes an hour from Biseondae, where you can see many figures inscribed on the rock, to Gwimyeonam Rock. After passing Gwimyeonam, you will walk along Cheonbuldong Valley famous for the beauty of the changing colors of tree leaves in fall.After the valley, Oryeon Falls will catch your eyes. Korea National Park. Yupyeong Course [Jirisan] Travel Time : 5 hours 30 minutes Distance : 10.2Km The road from the Yupyeong Ticket Booth to Saejaemaeul is narrow, but the concrete paved road, however, forms a very agreeable forest tunnel. 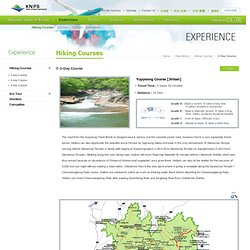 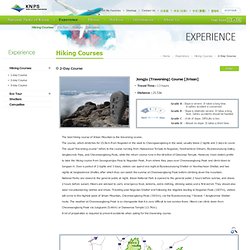 The course, which stretches for 25.5km from Nogodan in the west to Cheongwangbong in the west, usually takes 2 nights and 3 days to cover. The usual “traversing course” refers to the course running from Hwaeomsa Temple to Nogodan, Yeonhacheon Stream, Byeoksoryeong Valley, Jangteomok Pass, and Cheonwangbong Peak, while the return course runs in the direction of Dawonsa Temple. However, most visitors prefer to take the hiking course from Seongsamjae Pass to Nogodan Peak, from where they pass over Cheonwangbong Peak and climb down to Jungsan-ri. The Unlikely Expat: Seoul's Mountain Hiking...and Shopping. Al Jazeera's newest story on South Korea is about Koreans' love of their mountains. 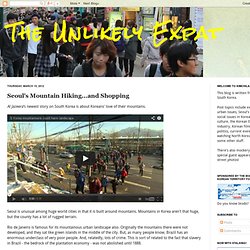 Seoul is unusual among huge world cities in that it is built around mountains. Mountains in Korea aren't that huge, but the county has a lot of rugged terrain. Rio de Janeiro is famous for its mountainous urban landscape also. Originally the mountains there were not developed, and they sat like green islands in the middle of the city. But, as many people know, Brazil has an enormous underclass of very poor people.