Modular vs Monolithic: No Holy Grails.

Scrum / Agile. Is NodeJS Wrong ? - Nicolas Cannasse Blog. NodeJS is pretty popular these days, so I took some time to have a in-depth look at it and analyze the pro/cons of using it against another server-side technology. 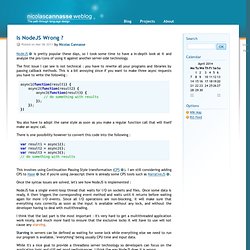 The first issue I can see is not technical : you have to rewrite all your programs and libraries by passing callback methods. This is a bit annoying since if you want to make three async requests you have to write the following : async1(function(result1) { async2(function(result2) { async3(function(result3) { }); }); }) You also have to adopt the same style as soon as you make a regular function call that will itself make an async call.

There is one possibility however to convert this code into the following : var result1 = async1(); var result2 = async2(); var result3 = async3(); This involves using Continuation Passing Style transformation (CPS). Once the syntax issues are solved, let's see how NodeJS is implemented : NodeJS has a single event-loop thread that waits for I/O on sockets and files. Dapper-dot-net - Simple SQL object mapper for ADO.NET. Official Github clone: Documentation you can improve The Dapper tag wiki on Stack Overflow can be improved by any Stack Overflow users. 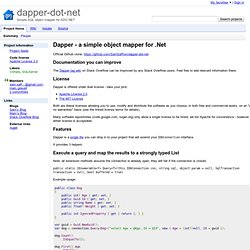 Feel free to add relevant information there. License Dapper is offered under dual license - take your pick: Both are liberal licenses allowing you to use, modify and distribute the software as you choose, in both free and commercial works, on an "as is, no warranties" basis (see the linked license terms for details). Many software repositories (code.google.com, nuget.org) only allow a single license to be listed; we list Apache for convenience - however, either license is acceptable. Features Dapper is a single file you can drop in to your project that will extend your IDbConnection interface. The Great Microservices vs Monolithic Apps Twitter Melee  Once upon a time a great Twitter melee was fought for the coveted title of Consensus Best Way to Structure Systems. 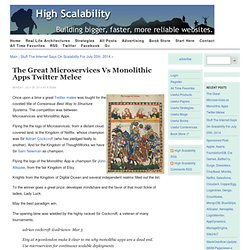 Knights from the Kingdom of Digital Ocean and several independent realms filled out the list. Using Grunt-TSD w/ Node. If you are a fan of Typescript I assume you are well aware of the amazing type definition repository over at definitelytyped.org. 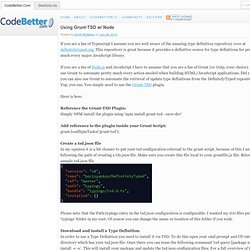 This repository is great because it provides a definitive source for type definitions for pretty much every major JavaScript library. If you are a fan of Node.js and JavaScript I have to assume that you are a fan of Grunt (or Gulp, your choice). You can use Grunt to automate pretty much every action needed when building HTML/JavaScript applications. Did you know you can also use Grunt to automate the retrieval of update type definitions from the DefinitelyTyped repository? Welcome to TypeScript. DevDocs. Inversion of Control and Dependency Injection with Castle Windsor Container - Part I. Inversion of Control (IoC) and Dependency Injection (DI) are two related practices in software development which are known to lead to higher testability and maintainability of software products. 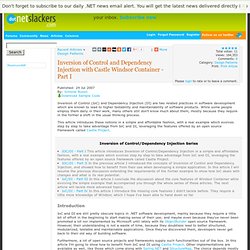