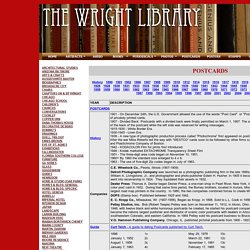 Diabetes. DNA 'Printing' A Big Boon To Research, But Some Raise Concerns. Cambrian Genomics says that what it calls a DNA printer is essentially a DNA sorter — it quickly spots and collects the desired, tailored stretch of DNA. 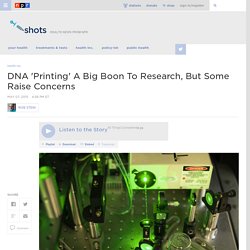 But some of the ways Heinz and others talk about the possible uses of the technology also worries some people who are keeping tabs on the trend. Cambrian Genomics.

Untitled. Fasteners. Doors. Exhaust Fan. Refer to the following pictures and manufacture dates to determine which model indoor rower you have. 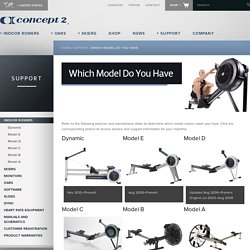 Click the corresponding picture to access service and support information for your machine. Dynamic Model E. Insulating with PINK FIBERGLAS Batts & Rolls - Residential Insulation - Owens Corning. Fiberglass Insulation vs. Cellulose Insulation - Is there a Clear Winner? In the world of insulation, seldom things are more heatedly debated than which type of insulation is better: fiberglass insulation or cellulose insulation. 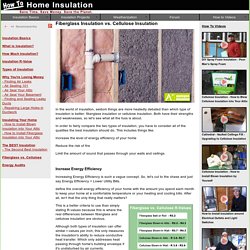 Both have their strengths and weaknesses, so let's see what all the fuss is about. In order to fairly compare the two types of insulation, you have to consider all of the qualities the best insulation should do. This includes things like: Rain Diverters - A Concord Carpenter. Rain Diverters Installing Roof Rain Diverters Nothing is more annoying than having to walk through a waterfall coming off your roof to reach the front door every time it rains. 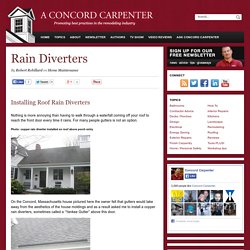 For many people gutters is not an option. V-11 Rain Diverter - A Great Alternative to Gutters. Installing a Rain Diverter. Nothing is more annoying than having to walk through a waterfall coming off your roof to reach the front door every time it rains. 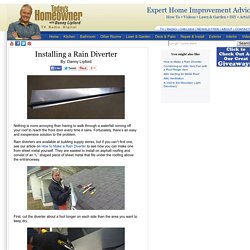 Fortunately, there’s an easy and inexpensive solution to the problem. Rain diverters are available at building supply stores, but if you can’t find one, see our article on How to Make a Rain Diverter to see how you can make one from sheet metal yourself. They are easiest to install on asphalt roofing and consist of an “L” shaped piece of sheet metal that fits under the roofing above the entranceway. First, cut the diverter about a foot longer on each side than the area you want to keep dry. Center the diverter over the area to be covered using a plumb bob or a string with a weight attached. Slide the diverter under the shingles. Slant the diverter so that one side is slightly lower than the other to allow for drainage. Carefully lift up the shingle tabs to keep from breaking them, and nail the diverter in place with roofing nails. Troubleshooting low or yellow flame output on a Barbeque Grill. Several questions have been asked on my Weber Technical Support Experience blog post regarding low flame output or yellow flame output on your BBQ Grill or burner, so I thought I would post some ideas to resolve the problem. 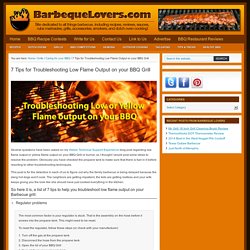 Obviously you have checked the propane tank to make sure that there is fuel in it before resorting to other troubleshooting techniques. This post is for the detective in each of us to figure out why the family barbecue is being delayed because the dang hot dogs won't cook. The neighbors are getting impatient, the kids are getting restless and your wife keeps giving you the look like she should have just cooked everything in the kitchen. So here it is, a list of 7 tips to help you troubleshoot low flame output on your Barbecue grill: Regulator problems. Common Mistakes. It is extremely important when choosing a roofing contractor you ensure the roofers that will be performing the installation are qualified and experienced. 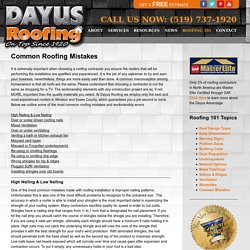 It is the job of any salesman to try and earn your business; nevertheless, things are more easily said than done. A common misconception among homeowners is that all roofs are the same. Please understand that choosing a contractor is not the same as shopping for a TV. The workmanship elements with any construction project are as, if not MORE, important than the quality materials you select. At Dayus Roofing we employ only the best and most experienced roofers in Windsor and Essex County, which guarantees you a job second to none. High Nailing & Low Nailing.