Myths about Bilingualism. Bilingual children switch tasks faster than speakers of a single language. Children who grow up learning to speak two languages are better at switching between tasks than are children who learn to speak only one language, according to a study funded in part by the National Institutes of Health. 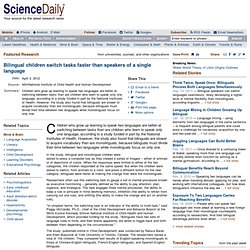 However, the study also found that bilinguals are slower to acquire vocabulary than are monolinguals, because bilinguals must divide their time between two languages while monolinguals focus on only one. In the study, bilingual and monolingual children were asked to press a computer key as they viewed a series of images -- either of animals or of depictions of colors.

When the responses were limited to either of the two categories, the children responded at the same speed. But when the children were asked to switch, from animals to a color, and press a different button for the new category, bilinguals were faster at making the change than were the monolinguals. Dr. How Bilingual Brains Think Outside the Boxe(s) Doctors don't always keep track of their patients closely enough for comfort. 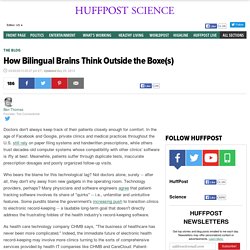 In the age of Facebook and Google, private clinics and medical practices throughout the U.S. still rely on paper filing systems and handwritten prescriptions, while others trust decades-old computer systems whose compatibility with other clinics' software is iffy at best. Meanwhile, patients suffer through duplicate tests, inaccurate prescription dosages and poorly organized follow-up visits. Who bears the blame for this technological lag? Your Mind on Language: How Bilingualism Boosts Your Brain. Language shapes the way we think. 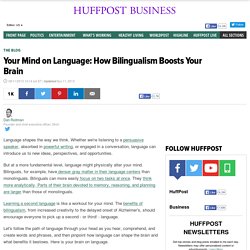 Whether we're listening to a persuasive speaker, absorbed in powerful writing, or engaged in a conversation, language can introduce us to new ideas, perspectives, and opportunities. But at a more fundamental level, language might physically alter your mind. Bilinguals, for example, have denser gray matter in their language centers than monolinguals. Bilinguals can more easily focus on two tasks at once. They think more analytically. Learning a second language is like a workout for your mind. The downside of bilingualism. Activist and educator Matthew Lynch recently asked if language barriers are the "new segregation. 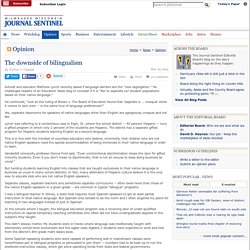 " He challenged readers of an Education Week blog to consider if it is "fair to separate our student populations based on their native language. " He continued, "Just as the ruling of Brown v. The Board of Education found that 'separate is ... unequal' when it comes to skin color -- is the same true of language preferences? " Yes, separate classrooms for speakers of native languages other than English are egregiously unequal and not fair. Neuroscience and the Bilingual Brain.

A selective attentive focus and the ability to block out distraction are seminal executive functions that are minimally developed in youngsters. 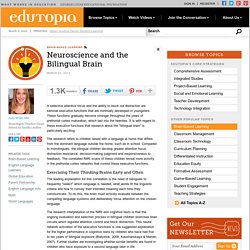 These functions gradually become stronger throughout the years of prefrontal cortex maturation, which last into the twenties. It is with regard to these executive functions that research about the "bilingual brain" is particularly exciting. The research refers to children raised with a language at home that differs from the dominant language outside the home, such as in school. Compared to monolinguals, the bilingual children develop greater attention focus, distraction resistance, decision-making judgment and responsiveness to feedback.

The correlated fMRI scans of these children reveal more activity in the prefrontal cortex networks that control these executive functions. Exercising Their Thinking Brains Early and Often Better Memory and Attention. Bilingual Program: Academic Content in Two Languages. Alison: The students who learn their own language in depth in middle school do better in high school. 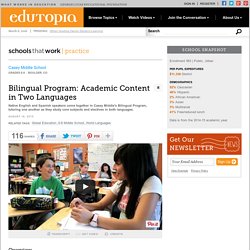 We note it in graduation. We get their math grades as freshmen and we can see it there. Our students here are really diverse. We have thirteen countries represented and twelve language backgrounds. It's about forty-five percent of our students who are coming from the Spanish language background here learning English. Impact of bilingual education on student achievement. Why You Should Consider Bilingual Education.

Across the country, more and more schools are implementing dual-language programs, in which students attend an equal number of classes in English and in another language, such as Spanish, Portuguese or Mandarin. 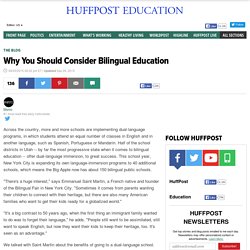 Half of the school districts in Utah -- by far the most progressive state when it comes to bilingual education -- offer dual-language immersion, to great success. This school year, New York City is expanding its own language-immersion programs to 40 additional schools, which means the Big Apple now has about 150 bilingual public schools.

"There's a huge interest," says Emmanuel Saint Martin, a French native and founder of the Bilingual Fair in New York City. "Sometimes it comes from parents wanting their children to connect with their heritage, but there are also many American families who want to get their kids ready for a globalized world. " "It's a big contrast to 50 years ago, when the first thing an immigrant family wanted to do was to forget their language," he adds. Five Fundamental Strategies for Bilingual Learners. The Bilingual Advantage. In the early fifties, as a young boy, I crossed the Atlantic aboard a TWA Super Constellation propeller airplane, from Madrid. 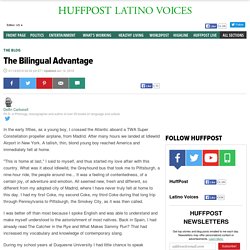 After many hours we landed at Idlewild Airport in New York. A tallish, thin, blond young boy reached America and immediately felt at home. "This is home at last," I said to myself, and thus started my love affair with this country. Bilingual Learning: Double the Vocabulary, Double the Time? With the United States becoming increasingly diverse, and school districts beginning to make accommodations that promote bilingualism, one of the most pressing questions that our schools face is whether bilingual education is worth the additional investment of time and resources. 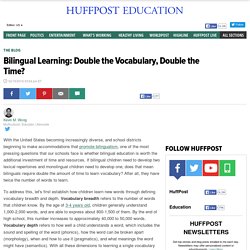