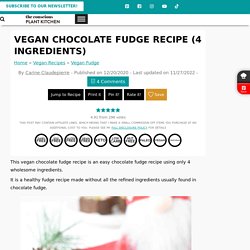 Vegan Upside Down Pear and Thyme Cake Recipe. With Thanksgiving over, we're finally heading into the holiday season and can start looking forward to cooking for the winter festivities. 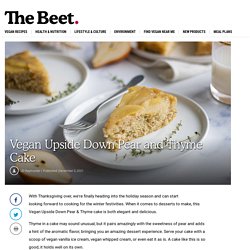 When it comes to desserts to make, this Vegan Upside Down Pear & Thyme cake is both elegant and delicious. Thyme in a cake may sound unusual, but it pairs amazingly with the sweetness of pear and adds a hint of the aromatic flavor, bringing you an amazing dessert experience. Serve your cake with a scoop of vegan vanilla ice cream, vegan whipped cream, or even eat it as is. A cake like this is so good, it holds well on its own. 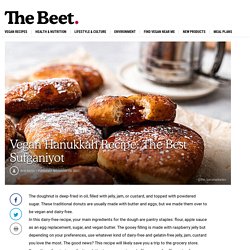 These traditional donuts are usually made with butter and eggs, but we made them over to be vegan and dairy-free. In this dairy-free recipe, your main ingredients for the dough are pantry staples: flour, apple sauce as an egg replacement, sugar, and vegan butter. The gooey filling is made with raspberry jelly but depending on your preferences, use whatever kind of dairy-free and gelatin-free jelly, jam, custard you love the most. The good news? This recipe will likely save you a trip to the grocery store. Serve the sufganiyot on a festive platter to your guests and offer a cup of coffee or tea for a complimentary drink that pairs perfectly with this dessert.

Vegan Cheesecake Recipe - NO Cashews! The easy vegan cheesecake recipe that even non vegans LOVE… with no cashews, and no tofu required. 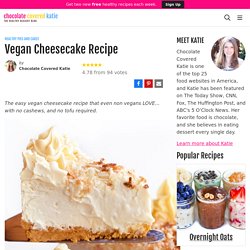 Vegan cheesecake with no cashews This vegan cheesecake is so out-of-this-world delicious that I have yet to bring it to any party where both vegans and non vegans haven’t raved about it! Even people with no interest whatsoever in healthy or vegan eating go crazy for this cheesecake every time I serve it. When creating the recipe, my goal had been to make something that tasted so similar to classic New York cheesecake that—if you didn’t already know it was egg free and vegan—you would absolutely never be able to tell. Vegan Chocolate Chip Cookies - NO Crazy Ingredients! These vegan chocolate chip cookies are everything you could ever want in a chocolate chip cookie recipe – soft, chewy, and melt-in-your-mouth delicious! 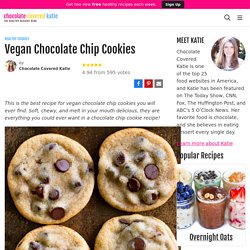 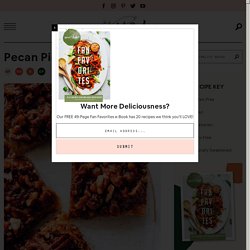 We’ve tried for some time to create the perfect vegan pecan pie, and after some pie struggles last year, we changed our vision a bit and boy are we happy with the result! Introducing: pecan pie bars with crunchy, buttery pecans and a shortbread-like crust. With all the classic flavor of pecan pie, they’re undetectably gluten-free and vegan, and perfect for your holiday table. Even better? They’re made with simple methods (no food processor required!) Origins of Pecan Pie In our search for the origins of pecan pie, we found a few theories. Paleo Apple Crisp with Almond Flour Crumble (DF) This paleo apple crisp (a.k.a paleo apple crumble) combines gooey baked apples with a crunchy almond flour crumble topping. 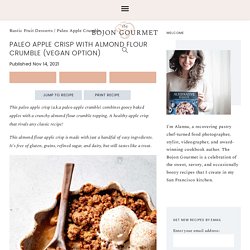 A healthy apple crisp that rivals any classic recipe! This almond flour apple crisp is made with just a handful of easy ingredients. It's free of gluten, grains, refined sugar, and dairy, but still tastes like a treat. Fruit crisps and crumbles are some of my all-time favorite desserts. They're easy to make with whatever fruit happens to be in season. Chef Chloe Coscarelli’s Vegan Caramel Apple Pie Bars. These Caramel Apple Pie Bars are the perfect combination of my two-holiday favorites, Apple Pie and Shortbread Cookies! 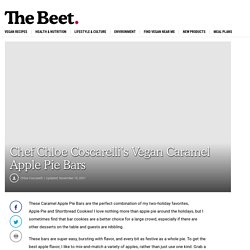 I love nothing more than apple pie around the holidays, but I sometimes find that bar cookies are a better choice for a large crowd, especially if there are other desserts on the table and guests are nibbling. These bars are super easy, bursting with flavor, and every bit as festive as a whole pie. To get the best apple flavor, I like to mix-and-match a variety of apples, rather than just use one kind. Grab a Granny Smith, McIntosh, Honey Crisp, or whatever apples you can find, I promise you won’t be disappointed. Remember, these are best if chilled in the fridge for a few hours or overnight before serving. I learned to cook from my mom and apple pie was one of the first recipes I learned from her over the holidays. 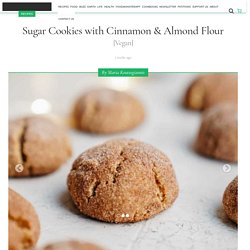 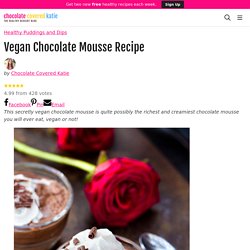 Soy Free Dairy Free. Vegan Chocolate Tart With Salted Oat Crust Recipe. Easiest Chocolate Cake Recipe. Lemon-Pistachio Loaf Recipe Recipe. Banana Bread Cinnamon Rolls. Oh, cinnamon rolls, banana bread. How have I not joined you before? Let me set right this injustice, join your little hands, if you will, so you can forevermore be united in holy sweet baked good matrimony. Dramatic? Over the top? I think not (Rhonda).

After having such success with my 7 Ingredient World’s Easiest Vegan Cinnamon Rolls, I knew more experimenting was to be done. You guys have been loving on my first recipe. The banana bread infusion happens in two ways: 1) banana puree in the dough, and 2) banana slices and walnuts in the centers. Vegan Apple Pie - The BEST Recipe You'll Find! This classic vegan apple pie recipe is everything you could ever want in a homemade apple pie, with delicious flaky pie crust and sweet apple filling in each bite! If you’re looking for the perfect apple pie recipe to make for the holidays, this tried-and-true recipe will not let you down.

Because the pie is made with only traditional apple pie ingredients, it’s a fantastic holiday dessert to make for both vegan and non vegan guests, and everyone will be asking you for the recipe! One bite of this completely delicious vegan apple pie, and you will never go back to store bought or canned filling ever again. Also try this popular Vegan Cheesecake. Almond Butter Brownies - Flourless & Vegan. Rich, gooey, dark, chocolatey almond butter brownies! Thick & Fudgy Brownies If you don’t like soft and extra fudgy brownies, you need to stay far away from these almond butter brownies – They are squares of pure chocolate bliss, so sinfully rich and velvety smooth. You’ll sit there reading the recipe and think to yourself, “No flour + only fifteen minutes of baking time?! There is absolutely no way these brownies could work!” Oh but not only do they work, they work like chocolate magic… and they are completely oil free! Zucchini Brownies - Chocolate Covered Katie.

These ultra rich and fudgy dark chocolate zucchini brownies taste so much like regular chocolate brownies that you’d absolutely never guess there’s an entire cup of zucchini packed into the recipe! If you’ve never tried making zucchini brownies, they are a must try. The zucchini allows you to add moisture and softness without all the extra fat, cutting back on the oil and calories while secretly packing the brownies with nutrition at the same time. Brownies that are healthy and don’t taste healthy?? It’s the BEST of both worlds! Also be sure to make these Black Bean Brownies. Best Vegan Mini Pecan Pies (Gluten-Free) - DADAEATS. טבעוני ומושחת: מתכון לבראוניז עם חמאת בוטנים. איך להכין קרמבו טבעוני. Vegan Lemon Bars (Easy Recipe) Blueberry Bundt Cake (Vegan Lemon Cake) Vegan Chocolate Cake Recipe. The BEST vegan chocolate cake recipe! It's moist and deeply chocolatey, with a rich chocolate frosting made from a secret healthy ingredient.

This vegan chocolate cake recipe comes from my new cookbook, Love & Lemons Every Day. Today, I’m sharing it in honor of the book’s launch, but this vegan cake recipe would be perfect for any celebration. It’s moist and delicious, with a rich dark chocolate flavor. Topped in a luscious frosting, it’s a dessert that everyone will love, whether they’re vegan or not. Vegan Carrot Cake Recipe. I make this vegan carrot cake recipe for Jack's birthday each year. Moist, cinnamon-spiced, and slathered in frosting, it's perfect for celebrations. This vegan carrot cake recipe is a riff on my mom’s traditional recipe. That cake is Jack’s all-time favorite dessert, so she makes it whenever she comes to visit.

These coffee shop-ready, chocolate-coated baked treats from the Hot For Food All Day cookbook make an impressive homemade gift. Experiment with different flavor variations, such as swapping the cinnamon for cardamom, ginger, or allspice; fold in dried currants, blueberries, or nuts other than pecans; and try other dry additions such as lemon or orange zest. What you need: Buttery Vegan Cinnamon Streusel Muffins. Make your weekend brunch or weekday breakfast extra special with these sweet, buttery, crumbly muffins from the Plantiful cookbook. Dreamy Vegan Blueberry Oat Milk Pound Cake.