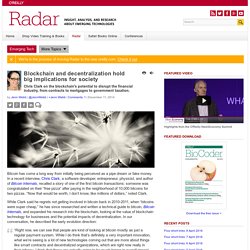 In a recent interview, Chris Clark, a software developer, entrepreneur, physicist, and author of Bitcoin Internals, recalled a story of one of the first bitcoin transactions: someone was congratulated on their “free pizza” after paying in the neighborhood of 10,000 bitcoins for two pizzas. “Now that would be worth, I don’t know, like millions of dollars,” noted Clark. 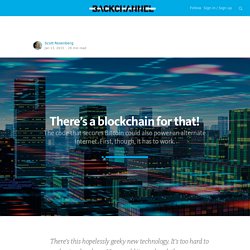 It’s too hard to understand and use. How could it ever break the mass market? How Blockchain could change finance. Blockchain Explained, What is Blockchain? Blockchain for dummies. Bitcoin might fail but the blockchain is here to stay - Full WIRED Retail talk. The Blockchain Explained. Episode 4: BlockChain - Explain it like I am 5. Episode 5: Blockchain - The Great Disruptor. How blockchain is likely to transform IT and business. Despite major up and downs throughout its occasionally turbulent six year lifetime, Bitcoin has managed to get farther than just about any other alternative currency, grabbing the interest of VC investors and an actual investors alike. 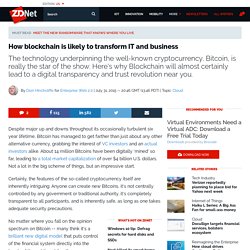 About 14 million Bitcoins have been digitally 'mined' so far, leading to a total market capitalization of over $4 billion U.S. dollars. Not a lot in the big scheme of things, but an impressive start. Certainly, the features of the so-called cryptocurrency itself are inherently intriguing: Anyone can create new Bitcoins, it's not centrally controlled by any government or traditional authority, it's completely transparent to all participants, and is inherently safe, as long as one takes adequate security precautions. Known as blockchain, the underpinning technology is a networked approach to making digital currency completely open, decentralized, and very difficult to hack, steal, or counterfeit. Blockchain moves into the large enterprise. Distributed Ledger Visible To All? Ready for Blockchain? You may not have heard of Blockchain yet but then why did Bank of America file for 15 patents on it? 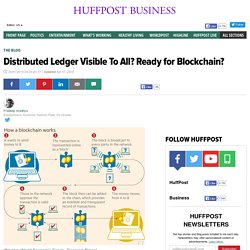 Why are major banks across the world including the Bank of England and Barclays saying that Blockchain is the next big technology disruptor that will change the face of business? The Blockchain is an immutable and globally shared digital record or ledger of all transactions which quite simply prevents anyone from spending what they do not have and thereby creates trust in a world currently ridden with subterfuge. Blockchain won’t kill banks: Brock Pierce. Blockchain – the technology that underpins the cryptocurrency bitcoin – is unlikely to kill banks despite warnings from top industry executives, the chair of a bitcoin non-profit organization told CNBC on Monday. 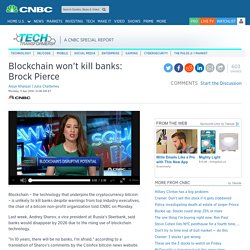 Last week, Andrey Sharov, a vice president at Russia's Sberbank, said banks would disappear by 2026 due to the rising use of blockchain technology. "In 10 years, there will be no banks, I'm afraid," according to a translation of Sharov's comments by the Coinfox bitcoin news website. But Brock Pierce, the chairman of the Bitcoin Foundation, said that while the adoption of blockchain will hit parts of a bank, it will ultimately create opportunity. "There are certain aspects of their business that are going to be negatively impacted, but there are also going to be other business units that are going to be positively impacted and new business units that get created that might not even exist today," Pierce told CNBC in an interview on Monday. The Don Tapscott Thinkers50 Video Blog - Thinkers 50. Don Tapscott is one of the world’s leading authorities on innovation, media and the social impact of technology. 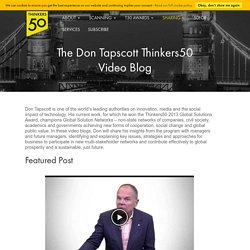 His current work, for which he won the Thinkers50 2013 Global Solutions Award, champions Global Solution Networks – non-state networks of companies, civil society, academics and governments achieving new forms of cooperation, social change and global public value. In these video blogs, Don will share his insights from the program with managers and future managers, identifying and explaining key issues, strategies and approaches for business to participate in new multi-stakeholder networks and contribute effectively to global prosperity and a sustainable, just future. IBM launches blockchain cloud services for government, healthcare sectors. IBM announced Friday it is launching its own framework for running blockchain networks along with new services on the IBM Cloud designed to meet security and regulatory compliance. 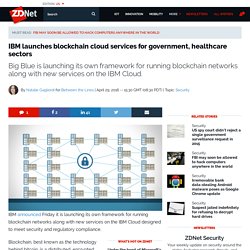 Blockchain, best known as the technology behind bitcoin, is a distributed, encrypted database architecture that is considered immune from tampering. In a nutshell, a blockchain logs all transactions on a bitcoin network and stores them in blocks that update a balance and data such as payments, confirmations and orders. IBM first got behind the technology two months ago when it announced plans to make blockchain work as an enterprise ledger, essentially creating blockchain-as-a-service. Today, IBM is doubling down on the technology even more. The Most Active Financial Services Firms and Strategics Investing in Bitcoin Startups. Over 70+ strategics are invested in blockchain and bitcoin startups including BBVA, Seagate, Rakuten and NYSE Euronext. 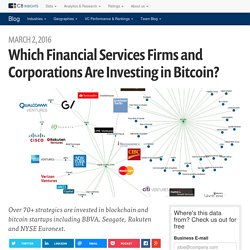 Join Capital One Growth Ventures & CB Insights in New York City for The State of Blockchain. By leading a huge $50M investment into bitcoin payments firm Circle in April 2015, Goldman Sachs became the first bulge bracket bank to invest in a digital currency or blockchain startup. From Credit Scores To Investment Management: 102 Startups Digitizing The Bank. The Blockchain Explained to Web Developers, Part 1: The Theory. The blockchain is the new hot technology. 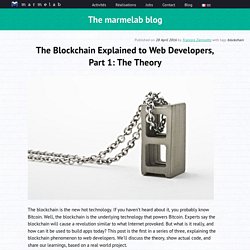 If you haven’t heard about it, you probably know Bitcoin. Well, the blockchain is the underlying technology that powers Bitcoin. Experts say the blockchain will cause a revolution similar to what Internet provoked. But what is it really, and how can it be used to build apps today? This post is the first in a series of three, explaining the blockchain phenomenon to web developers. Whatever next generation banking is … it won’t be banking – Chris Skinner's blog. After writing about whether we are creating faster horses when we think of applying open sourced technologies to banking, some more thoughts occurred to me: Are we applying Blockchain to clearing and settlement, rather than reimagining the whole trade cycle from liquidity structures to collateral management using open source platform structures? 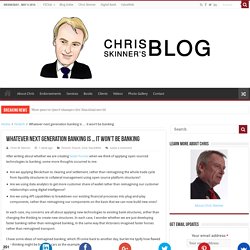 Are we using data analytics to get more customer share of wallet rather than reimagining our customer relationships using digital intelligence? Finance and Beyond: An Infographic Map of Bitcoin and the Emerging Blockchain Ecosystem. This popular article and its infographic, originally published on November 15, 2015, have been updated by Michael Gord to reflect the major developments since then in the world of Bitcoin and blockchain. In the fall of 2015, BitPay and BTC Media (parent company of Bitcoin Magazine) commissioned Josh Dykgraaf, an artist based in Amsterdam who specializes in 3D and photo illustrations, to design an infograph as a guide to navigating the emerging Bitcoin and blockchain ecosystem. The infographic has been so popular, and the growth in the ecosystem so dynamic, that BTC Media commissioned Dykgraaf to create an updated poster which made its debut in March at SXSW®, and is available as a digital download (JPEG, PDF) or printed copy.

On January 3, 2009, the Genesis block, or the first block in the Bitcoin blockchain, was created. Amazon Announces Blockchain-as-a-Service (BAAS) Sandbox for Developers - Blockchain News. Amazon Web Services has teamed up with Digital Currency Group to create a Blockchain-as-a-Service solution for financial services firms according to a report in Forbes by Laura Shin. “Today in financial services, distributed ledger technology is at the forefront of any discussion related to innovation. AWS is working with financial institutions and blockchain providers to spur innovation and facilitate frictionless experimentation,” said Scott Mullins, AWS’s head of worldwide financial services business development, in a statement.

A gentle introduction to blockchain technology. This article is a gentle introduction to blockchain technology and assumes minimal technical knowledge. It attempts to describe what it is rather than why should I care, which is something for a future post. Shorter companion pieces to this are: People use the term ‘blockchain technology’ to mean different things, and it can be confusing. Sometimes they are talking about The Bitcoin Blockchain, sometimes it’s other virtual currencies or digital tokens, sometimes it’s smart contracts. A gentle introduction to smart contracts. What are people talking about when they talk about smart contracts? In the context of blockchains and cryptocurrencies, smart contracts are: – pre-written logic (computer code), – stored and replicated on a distributed storage platform (eg a blockchain), – executed/run by a network of computers (usually the same ones running the blockchain), – and can result in ledger updates (cryptocurrency payments, etc). … In other words, they are little programs that execute “if this happens then do that”, run and verified by many computers to ensure trustworthiness.