Documents. 6-12 Collaboration Rubric (CCSS Aligned) Creative Thinking VALUE Rubric. The VALUE rubrics were developed by teams of faculty experts representing colleges and universities across the United States through a process that examined many existing campus rubrics and related documents for each learning outcome and incorporated additional feedback from faculty. 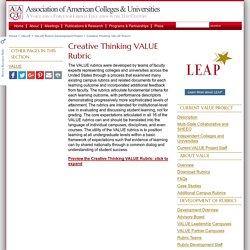 The rubrics articulate fundamental criteria for each learning outcome, with performance descriptors demonstrating progressively more sophisticated levels of attainment. The rubrics are intended for institutional-level use in evaluating and discussing student learning, not for grading. The core expectations articulated in all 16 of the VALUE rubrics can and should be translated into the language of individual campuses, disciplines, and even courses. The utility of the VALUE rubrics is to position learning at all undergraduate levels within a basic framework of expectations such that evidence of learning can by shared nationally through a common dialog and understanding of student success. Definition Glossary. Adifferentplace.org. Critical Thinking Testing and Assessment. The purpose of assessment in instruction is improvement. 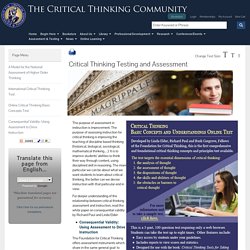 Home Page. P21. 21 Century Info. 21st Century Info This is a page that will be growing with twenty first century information. 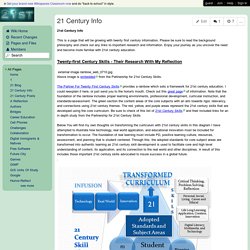 Please be sure to read the background philosophy and check out any links to important research and information. Enjoy your journey as you uncover the need and become more familiar with 21st century education. Twenty-first Century Skills - Their Research With My Reflection Above image is embedded from the Partnership for 21st Century Skills.The Partner For Twenty First Century Skills provides a rainbow which sets a framework for 21st century education. I could reexplain it here, or just send you to the horse's mouth. Keeping Kids In The Twenty- First Century Engagement Zone It seems that today a key word in 21st Century Learning is Engagement. Revising Bloom Makes Sense In The Twenty-First Century Above content is based on research by: L.W. Teaching in the 20 Century Classroom As Compared To 21st Century: (Things To Think About) 2014 Report Summary. The OECD estimates that half of the economic growth in developed countries in the last decade came from improved skills. 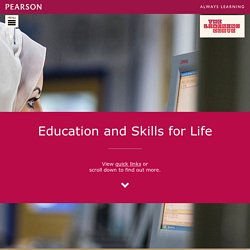 See More In recent years it has become increasingly clear that basic reading, writing and arithmetic are not enough. The importance of 21st century non-cognitive skills - broadly defined as abilities important for social interaction - is pronounced. "The world economy no longer pays for what people know but for what they can do with what they know.

" - Andreas Schleicher, OECD deputy director for education Making sure people are taught the right skills early in their childhood is much more effective than trying to improve skills in adulthood for people who were let down by their school system. 2014 Report Summary. A Vision of K-12 Students Today. Framework for 21st Century Learning. P21's Framework for 21st Century Learning was developed with input from teachers, education experts, and business leaders to define and illustrate the skills and knowledge students need to succeed in work, life and citizenship, as well as the support systems necessary for 21st century learning outcomes.

It has been used by thousands of educators and hundreds of schools in the U.S. and abroad to put 21st century skills at the center of learning. The P21 Framework represents both 21st century student outcomes (as represented by the arches of the rainbow) and support systems (as represented by the pools at the bottom). While the graphic represents each element distinctly for descriptive purposes, P21 views all the components as fully interconnected in the process of 21st century teaching and learning. 21st Century Student Outcomes 1. 21stCenturyKnowledge PM KK.

Rethinking Learning: The 21st Century Learner. K12 educational transformation through technology. The 8 Must Have Skills for The 21st Century Students. June 23, 2014 Here is a wonderful little visual I came across through Edudemic which outlines the 8 skills students need in order to live up to the expectations of the future job market. 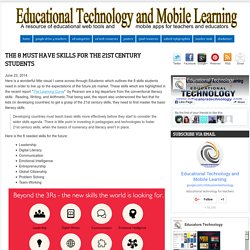 These skills which are highlighted in the recent report "The Learning Curve" by Pearson are a big departure from the conventional literacy skills : Reading, Writing, and Arithmetic.That being said, the report also underscored the fact that for kids (in developing countries) to get a grasp of the 21st century skills, they need to first master the basic literacy skills.

Developing countries must teach basic skills more effectively before they start to consider the wider skills agenda. There is little point in investing in pedagogies and technologies to foster 21st century skills, when the basics of numeracy and literacy aren't in place. Untitled.