| Saunders & Walker was founded in 1987 in the Tampa Bay area of Florida. Our law firm has always limited our law practice to representing the wrongfully injured or killed against corporations, insurance companies, and manufacturers in claims for compensation.

Clergy Sexual Abuse Statute of Limitations. Recent changes to the law in at least 15 states have extended the clergy sexual abuse statute of limitations and, in some cases, provided lookback windows allowing victims to file criminal charges or civil lawsuits no matter how long ago the abuse occurred. 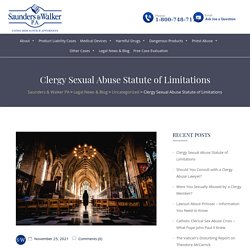 It is estimated that these changes will result in at least 5000 new cases filed with compensation paid to victims reaching $4 billion dollars or more.1 Extended Time Limits for Filing a Civil Suit or Criminal Charges Statutes of limitations have always varied from state to state, and often required victims to report child sexual abuse by priests or clergy members by the time they were in their 20s. Many victims found it difficult to deal with the trauma and pain of their experience in time to have their day in court. Victims of child sex abuse often experience serious emotional and mental health issues that may take years of therapy and counseling to overcome. The Diocese of Sacramento Priest Abuse List. In 2019 the Diocese of Sacramento released a complete list of priests and clergy who have been credibly accused of sexual abuse. 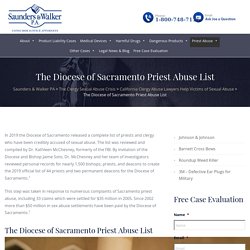 The list was reviewed and compiled by Dr. Kathleen McChesney, formerly of the FBI. By invitation of the Diocese and Bishop Jaime Soto, Dr. Diocese of San Diego Priest Abuse List. Some of the most publicly visible Catholic bishops and priests accused of sexually abusing minors allegedly committed their crimes in the Diocese of San Diego. 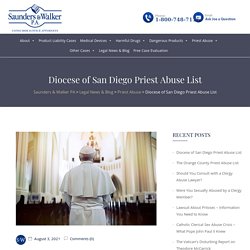 In fact, the Catholic Diocese of San Diego attempted to declare bankruptcy before they agreed to pay the second largest diocese settlement to victims in the United States.1 In 2007, a landmark settlement for San Diego priest abuse was made by the diocese for 144 claims against 48 priests and another employee. The Orange County Priest Abuse List. The updated list of publicly accused Roman Catholic priests contains individuals who have been credibly accused, faced criminal charges or clergy abuse lawsuits, or have agreed to settlements with their victims. 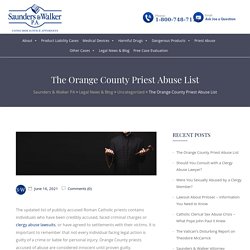 It is important to remember that not every individual facing legal action is guilty of a crime or liable for personal injury. Orange County priests accused of abuse are considered innocent until proven guilty. Should You Consult with a Clergy Abuse Lawyer? The problem of sexual abuse within religious institutions nationwide is becoming more and more visible, with recent legal changes allowing victims of clergy sexual abuse to take action even if a previous statutes of limitations prevented them from doing so. 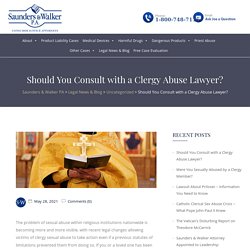 If you or a loved one has been victimized by a Catholic priest or other religious figure, speaking to a clergy abuse lawyer can help you recover and possibly prevent a predator from continuing their abuse. Studies show that only 23% of sexual abuse survivors report to religious authorities, and only 11% report the abuse to law enforcement.1 There is a culture of shame and silence associated with being a victim of abuse in a religious setting, but, as brave survivors come forward to file lawsuits and criminal charges, others are inspired to hold these criminals accountable as well. Laws Are Changing to Give Victims a Voice What Are Your Legal Options After Clergy Sexual Abuse? New State Legislation Extends Your Time to Report Abuse. Should You Consult with a Clergy Abuse Lawyer? Were You Sexually Abused by a Clergy Member? Here’s What to Know Trigger Warning: This article may contain content that is painful or upsetting for individuals who have suffered sexual abuse.

If you find this material distressing, consider contacting the National Sexual Assault Hotline at (800) 656-4673 for support services. Lawsuit About Prilosec – Information You Need to Know. Over the past several years, various acid reflux medications and heartburn drugs have been called into question in regards to the seriousness of their side effects. 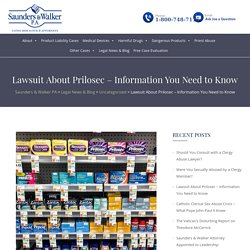 As we have seen with the Zantac recall and related injury lawsuits, Prilosec is now another medication to come into question. What Is Prilosec? Prilosec is a popular brand of a proton pump inhibitor (PPI) medication. PPIs were developed and released on the market over 25 years ago. Initially, the drugs were only available by prescription through a doctor. Saunders & Walker Attorney Appointed to Leadership Development Committee of Zantac Litigation.

The attorneys at Saunders & Walker are proud to announce that one of our own attorneys has been appointed to the leadership development committee of the litigation against Zantac, the notorious carcinogen-containing heartburn drug. 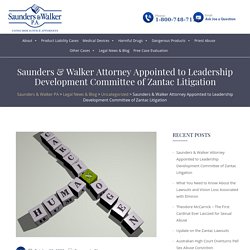 We detail this appointment, as well as the health issues, latest drug lawsuits, and steps to take if you were adversely affected by this drug. Judge Rosenberg Appoints 5 Lawyers in Innovative Effort On May 8th, 2020, District Judge Robin Rosenberg, who will be hearing cases in multi-district litigation (MDL) involving Zantac, created a Leadership Development Committee. The committee will allow new lawyers access to the case for the purpose of gaining experience in the leadership field of MDL.

Five lawyers, including our own Nicola Larmond-Harvey, will gain invaluable experience as they accept the opportunity to learn about the logistics of major MDL and work side-by-side with seasoned mentors. What You Need to Know About the Lawsuits and Vision Loss Associated with Elmiron. In May of this year, we revealed the strong possibility that the bladder drug Elmiron may cause serious eye damage, and we urged anyone reading the post who was a long-term user of the drug to get examined by their ophthalmologist. 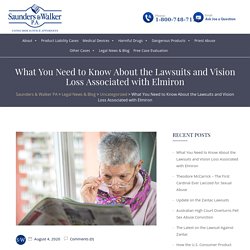 Today, Elmiron has joined the growing number of active drug lawsuits. Read on for more about this drug, the warning signs of eye damage, and the steps to take to get compensation. Update on the Zantac Lawsuits. In a recent post to our blog, we revealed that Zantac was the latest addition to the list of drugs found to contain ingredients so dangerous that lawsuits against Zantac makers were being filed. 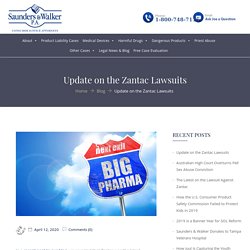 Since that post, more information about this drug has been discovered, and action has been taken by the FDA. Read on for more information about this latest update. The Latest on the Lawsuit Against Zantac. How the U.S. Consumer Product Safety Commission Failed to Protect Kids in 2019. How Juul Is Capturing the Youth Tobacco Market. Since its inception in 2015, Silicon Valley company Juul has managed to dominate the vaping market. However, the startup has been the subject of action from the FDA, following evidence linking their dangerous products to hospitalizations and death and concern that the company has been targeting youths. If you or a loved one is a victim of vaping illness, now may be the time to consider enlisting the help of a product liability lawyer.

More Youths Are Vaping Now Than Ever Before Vaping among teens is now a popular trend, but how did this happen? Stanford Research’s recent white paper release reveals some shocking information with regard to Juul’s marketing campaigns from their 2015 launch to the fall of 2018. Although the company adamantly denied targeting teens in its marketing campaigns, the white paper revealed that not only did an overwhelming majority of Juul ads target youth, but they employed the same tactics used by tobacco companies to do so. Downplaying the Dangers Sources: 1. 2.

Truvada Recall: What You Need to Know. Sometimes, when new and innovative drugs hit the market, they can seem too good to be true. Unfortunately, that was the case with Truvada’s release in 2004. The Truvada recall impacted many individuals and families, resulting in multiple pharmaceutical lawsuits. 3M – Defective Ear Plugs for Military. 2018 proved to be a difficult year for 3M.

First, the company was hit with allegations over its fire suppressant foam. Then, a whistleblower came forward to voice their anger over its defective military earplugs, which have caused service members a multitude of injuries. If you or a family member served between 2003 and 2015 and have experienced hearing problems as a result, a defective product lawyer can help you get compensation. Which 3M Products Are the Problem? The products in question are 3M’s Dual-Ended Combat Arms Earplugs. Service members wearing these earplugs could insert one end of the earplug into their ears if they wished to block all typical sounds. Unfortunately, the now-discontinued Combat Arms Earplugs contained defects that failed to protect service members’ hearing as they claimed. Defective 3M Earplug Design The problem with the Combat Arms earplugs was in their design. What Kind of Injuries Were Caused, and What Damages Are Being Sought? New York Passes Child Victim Act: What This Means for Sexual Abuse Victims - Saunders.

Monday, January 28th, saw the passing of the Child Victims Act in New York. This new law will see stronger protection for all victims of child abuse, extending the state’s statute of limitations beyond the age of 23. The act is a major victory for survivors of abuse, allowing their sexual assault cases to include a much larger scope and span of time than before. Vaginal Mesh Implant Attorney Florida. Transvaginal Mesh Recall Lawsuits Florida Thousands of Vaginal Mesh Lawsuits Filed Over 75,000 lawsuits nationwide have been filed by women suffering from failed transvaginal mesh and sling implants.

Many women have endured multiple painful surgeries without a cure. Our firm is continuing to file lawsuits for injured women and our founding attorney Joseph H. The Fire-Suppressant Foam That Is Causing Health Fires. “The Bleeding Edge”—New Documentary Exposes the Medical Device Industry’s Lack of Regulation. US Government Demands Reimbursement from Purdue Pharma for Opioid Crisis. As we are now aware, opioids—originally created for the purpose of pain relief—have a dark side: a euphoric, and, therefore, addictive high. The dramatically increased demand for these drugs has resulted in a growing opioid crisis in the United States, which claimed over 42,000 victims in 2016—a number far above any recorded in years prior.1 Many victims and their families have sought compensation via a pharmaceutical product liability lawyer.

The opioid crisis has not only cost many addicts their lives but has also left many devastated families in its wake. Billions of tax dollars have been spent each year on law enforcement, public healthcare, treatment facilities, and many other services. Purdue Pharma’s Opioid Brand Names and Their Significant Health Risks Opioids have been marketed under a long list of brand names. OxyContinButransMS ContinPalladoneDilaudid Opioids as Gateway Drugs The opioid crisis goes deeper than just the drugs themselves. Do Self-Driving Cars Put Us All in Danger? Tesla autonomous cars. Google autonomous car. Hernia Mesh Infections Pose Serious Risks to Medical Patients. How Do I Know if My Medical Malpractice Lawsuit Qualifies as Criminal Charges? Net Neutrality & Consumer Justice: Are Big Businesses About to Take Over the Internet? - Saunders & Walker PA. Nine Steps in Medical Malpractice Suits.