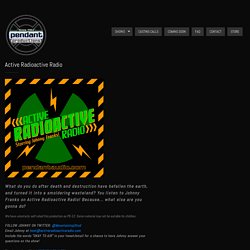 I was the GM, and I was trying to create the most immersive experience possible for the players, in a way I never had before. I had tactile in-game currency, full 3D models of towns and buildings for battles, and I supplemented the gaming sessions with original, custom audio files to provide ambience, music, and even a "live" DJ who'd get news on the players' exploits and report on them to the world at large. I asked for volunteers to do voices for the DJ and several NPCs on Twitter. Doled out the roles in the order people said they'd help out. And we created a monster. Johnny Franks quickly became beloved by all, and while life and time restraints put our RPG on hold, we grew to miss the bloviating blowhard. We hope you grow to love Johnny as much as we do, and enjoy getting to know him and the denizens of the crazy world he inhabits. Archer & Armstrong - Production Journals (2016) Dixie Stenberg and Brassy Battalion Adventure Theater, The (2006-10) 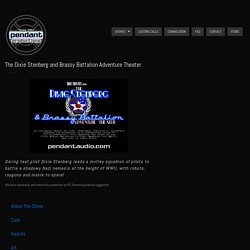 The Dixie Stenberg and Brassy Battalion Adventure Theater grew out of a shared love for the classic radio theatre shows of the 40s and 50s. Specifically the aerial adventure drama, with shows like Captain Midnight, Hop Harrigan, Adventures by Morse and Speed Gibson. They showcased not only the dramatic range of the writers of the period and the actors and actresses involved, but also a somewhat larger canvas than most other radio serials of the period. The characters in these shows would traipse all over the world, getting into trouble and danger, sometimes not getting out again, most times saving society or friends or their neighbor's cat, but throughout all of this there was a high sense of fun and adventure in the voices of the cast.

Thankfully my parents set me straight in that regard. Genesis Avalon (2009-14) PREVIEW TRAILERGAtrailer1.mp3 "Genesis Avalon" is a full-cast, maxi-series fantasy serial drama. 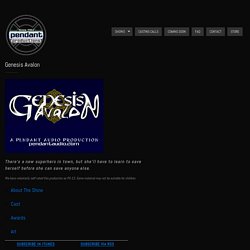 Like a lot of kids who grew up in the 1990s, I grew up with shows like X-Men, Batman: The Animated Series, Superman, Justice League, and Spider-man. As a child of the 90's though, I also grew up with a totally different form of the superhero in the form of anime. From the boys of Gundam, to the seven warriors of Suzaku in Fushigi Yuugi, to even (dare I say it) Sailor Moon, I had been able to see two different kinds of heroes. The kinds with capes and gadgets (Or alien powers), and the kind whose mystical powers governed their duties and how they fight. 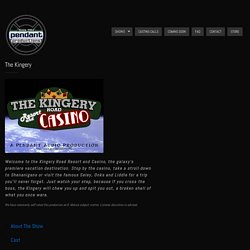 The Kingery began as a simple concept, which was merely that I gathered up the best writers I knew and asked them to co-create a show with me. What resulted were many long discussions and chats, planning sessions and debates over the course of two years. It is very much a series intended for adults and it will explore some very serious issues that can't as easily be touched upon in our other shows. It's got very complex, flawed characters... people with problems who are just trying to find their way in life. Line, The (2010-12) PREVIEW TRAILERSTheLinetrailer1.mp3TheLinetrailer2.mp3TheLinetrailer3.mp3TheLinetrailer4.mp3TheLinetrailer5.mp3TheLinetrailer6.mp3TheLinetrailer7.mp3TheLinetrailer8.mp3 "The Line" is a full-cast maxi-series serias fantasy drama. 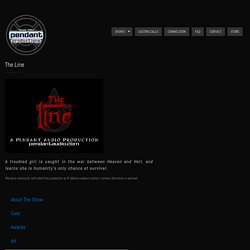 “How far do you want to go with this, Chris? You’re going to piss off a lot of people!” It’s possible I like to push boundaries a little bit; question the status quo... perhaps it’s growing up with parents who encouraged an open mind, perhaps it’s a life-long allegiance to ‘fringe’ politics (currently known as the Left Wing); I think spending the first sixteen years of my life regularly attending a Catholic Church had a lot to do with it. Let’s be clear, religion fascinates me. And this is important, there are so many religions and so many facets within each of them that it would take a lifetime to begin to understand each of them, to truly comprehend what they mean and, possibly most importantly, discover which (if any) was the ‘truth’. So welcome to "The Line". Pendant Shakespeare, The (2007- ) PREVIEW TRAILERWildBillTrailer.mp3 (Preview trailer music by Josh Woodward under a CC by 4.0 license. 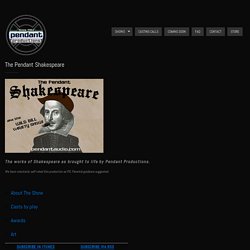 No changes to the piece were made.) "The Pendant Shakespeare aka The Wild Bill Variety Show" is an ongoing presentation of the works of William Shakespeare. “If you can look into the seeds of time, and say which grain will grow and which will not, speak then to me.” Phantom Canyon - Production Journals (2013-14) Once Upon A Time In Vegas (2007-10) PREVIEW TRAILERSVegasTrailer.mp3VegasTrailer2.mp3VegasTrailer3.mp3VegasTrailer4.mp3 "Once Upon a Time in Vegas" is a full-cast maxi-series fantasy drama. 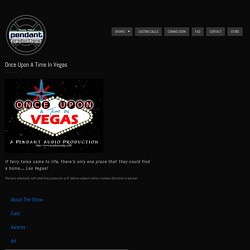 I suppose my writing bug began when I couldn't get into the advanced acting class in high school, so I took Playwrighting/Directing instead. I ended up being the most prolific student in the class, producing about four plays to everyone else's one. I loved writing! Fast forward a few years where I meet Rene Jones in a creative writing class in college. During the course of this class, she wrote two short stories which ended up being the premise for a book series, which we are still working on. Quick Audio (2015-16) PREVIEW TRAILERSQAtrailer1.mp3QAtrailer2.mp3QAtrailer3.mp3QAtrailer4.mp3 "Quick Audio" is a full-cast, extremely-short-format comedy show. 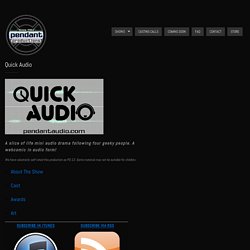 I love audio drama. Over the years, I've had the pleasure to be involved with several while wearing the different hats of actor, writer, or director. And I've found that I especially like great quality audio dramas that update regularly. I also love webcomics, and I marvel at how they operate with their update schedules and how they manage to tell stories in short updates, and in some cases, an ongoing format. For a while now I've wanted to write one, but I can’t draw at all (I don’t even have the talent for stick figures!). Quick Audio is an Audio Drama that updates most Mondays/Fridays. It’s really just a big experiment, and all that really matters is how long we can torture the actor who plays Michael. Come join us for the ride! Red Sands Investigations (2009-10) PREVIEW TRAILERRSItrailer.mp3 "Red Sands Investigations" is a full-cast original feature in four parts. 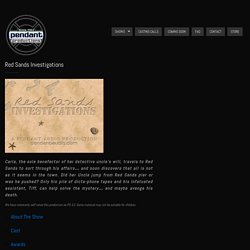 Like many people, I love writing, so I’ve been doing it for enjoyment for a long time. I had written some short plays and sketches for theatre, but moving into a new area meant that the logistics of fitting in involvement in drama groups became difficult. Seminar (2007- ) PREVIEW TRAILERSeminarTrailer.mp3 "Seminar" is a full-cast, ongoing anthology show with no restrictions on genre. 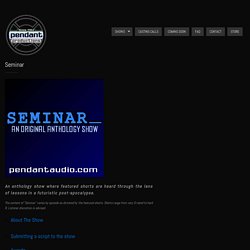 I've been an independent radio play director since writing and directing my own original "Genesis Avalon," so I've really enjoyed the technical part of the radioplay process, just as much as acting. Tabula Rasa (2012-15) PREVIEW TRAILERTabulaRasaPREVIEW.mp3 "Tabula Rasa" is a full-cast maxiseries sci-fi/crime serial drama. In the preface to David Copperfield, Charles Dickens remarks that he is “in danger of wearying the reader whom I love, with personal confidences, and private emotions.” This Week in Pendant (2012- )