Citizen’s Arrest - How Is This Still a Law? Murder of Ahmaud Arbery yet another symbol of systemic racism in US. Retracing Ahmaud Arbery’s Final Minutes: What Videos And 911 Calls Show. A Georgia man was chased and killed while jogging, his mother says. Ahmaud Arbery, 25, was jogging in a Brunswick neighborhood on February 23 when a man and his son chased him down, telling police later that they thought he looked like the suspect in a series of recent break-ins in the area. 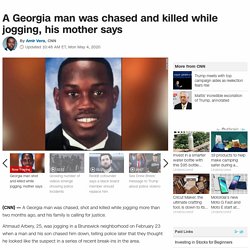 Wanda Cooper, Arbery's mother, told CNN Sunday that when police notified her of her son's death, she was told her son was involved in a burglary and that there was a confrontation between her son and the homeowner and a struggle over a gun. "He was not armed," Cooper said. She said she never worried about him jogging because he wasn't bothering anyone. There have been no charges against the father and son involved in the incident, former police officer Gregory McMichael and his son Travis. CNN has reached out to Gregory McMichael for comment, but he said he won't be commenting because he is under investigation. "According to that law, you actually have to be observing the crime or be in the immediate knowledge of the crime," Merritt said. 'We expect action this week' Telling..: George E. Barnhill's letter to Glynn County PD.

Probable cause for charges in Arbery killing; GA investigator alleges use of racial slur. William Bryan, the man who filmed the Ahmaud Arbery shooting, was arrested on felony murder charges. 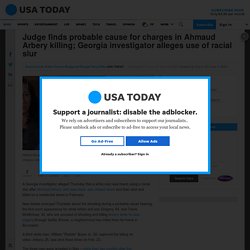 USA TODAY A Georgia investigator alleged Thursday that a white man was heard using a racial slur after Ahmaud Arbery, who was black, was chased down and then shot and killed on a residential street in February. New details emerged Thursday about the shooting during a probable cause hearing, the first court appearance for white father and son Gregory, 64, and Travis McMichael, 34, who are accused of shooting and killing Arbery while he was jogging through Satilla Shores, a neighborhood two miles from his home in Brunswick. A third white man, William "Roddie" Bryan Jr., 50, captured the killing on video. Arbery, 25, was shot three times on Feb. 23. The three men were arrested in May – more than two months after the killing – following a storm of public outcry after video of the incident was made public. 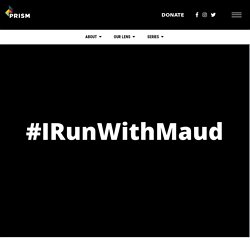 Jackie Johnson is running unopposed for the Republican nomination in the June 9, 2020, primary, but she may have a challenger in the November general election if an independent candidate can gather enough signatures to make the ballot. According to The Brunswick News, this will be the first contested general election in 24 years for the District Attorney’s Office for the Brunswick Judicial Circuit. Defense attorney Keith Higgins announced his intent to run as an independent for Brunswick Judicial Circuit district attorney earlier this year.

There is no Democratic candidate running in this district. While Arbery’s case has grabbed national headlines in the past week, it has been over two months since his killing. Johnson is one of two district attorneys to have recused themselves in the case due to conflicts of interest involving the perpetrators. Obituary for Ahmaud Marquez Arbery. Mr. 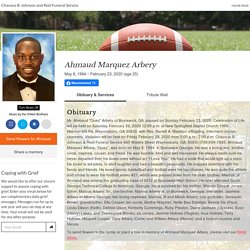 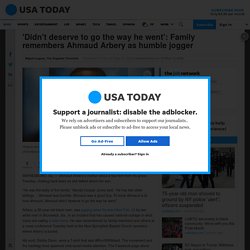 USA TODAY WAYNESBORO, Ga. — Ahmaud Arbery’s mother stood a few feet from his grave Tuesday, choking back tears as she talked about her son. “He was the baby of the family,” Wanda Cooper Jones said. Ahmaud Arbery killing: Georgia investigator describes racial slur. Glynn County police chief, 3 ex-officers booked into jail. BRUNSWICK, Ga. – The police chief and three former high-ranking officers of the Glynn County Police Department indicted last Thursday on charges that they ignored evidence that an officer was consorting with a drug dealer were booked into jail on Friday and Saturday. 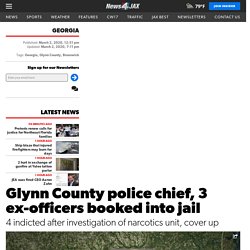 Arrest warrants were issued for Glynn County Police Chief John Powell, Vidalia Police Chief Brian Scott, and former Glynn County officers David Haney and David Hassler after a grand jury returned a 20-count indictment. Powell is charged with four counts of violating his oath of office, two counts of influencing a witness and one count of attempting to commit perjury. Scott, formerly Powell’s chief of staff until he took the Vidalia job in July, is charged with two counts of violating his oath and one count apiece of influencing a witness and criminal attempt to commit perjury.

Both Powell and Scott were placed on administrative leave by their employers.

Related:  Read and Listen Along and Aloud Resources   -  The Absolute True Diary of a Part-time Indian   -  engelska   -  Civil Right Movement and Racism   -  Resa   -  Avspänning/stresshantering   -  Mid 2020-? Police Murder of Yet Another US Citizen of Color Triggers Mostly Peaceful Protests Jacked Up by Angry Cops w/Weapons   -  Education   -  Enterprise