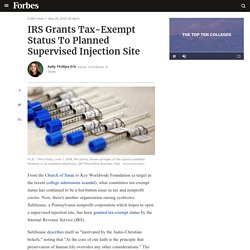 (AP Photo/Rick Bowmer, File) From the Church of Satan to Key Worldwide Foundation (a target in the recent college admissions scandal), what constitutes tax-exempt status has continued to be a hot button issue in tax and nonprofit circles. 5/11/19: Safehouse 'friends' hope to sway public on Philly injection site. 5/24/19: With Mayor Jim Kenney’s election excuse gone, Philly’s got nothing to lose on supervised injection sites — except more lives. 5/29: Maine Is 17th State to Ban Use of Conversion Therapy on Minors. 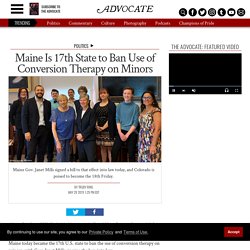 Janet Mills (in bright blue, center left) and Mary Bonauto (center right) with young Mainers. Maine today became the 17th U.S. state to ban the use of conversion therapy on minors, with Gov. Janet Mills signing the ban into law. 5/29: Justin Amash Won Debates After His Call for Impeachment. “They don’t support FISA reform,” he declared. 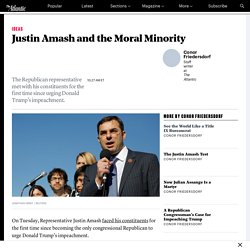 “They are not protecting your rights. They want to protect the president. 5/29: Robert Mueller Says It’s Up to Congress to Indict a President. After two years of studiously avoiding the spotlight, the special counsel, Robert Mueller, was finally ready to speak to the public. Standing at a lectern with a sign behind him that said “Department of Justice Washington,” he looked every inch the part: dark chalk-stripe suit, white button-down shirt, navy-blue tie, hair parted at the side, posture erect. His voice was firm, and his words were carefully chosen to put the onus firmly on Congress to decide whether to impeach Donald Trump on charges of obstruction of justice.

Volume II of the Mueller report, which the special counsel delivered to the Attorney General, William Barr, at the end of March, contained a section purporting to explain why Mueller decided not to reach a prosecutorial decision on whether Trump obstructed justice, but it was prolix and a bit difficult to decipher. 5/18: First Republican Congressman joins the call for Trump's impeachment.

5/17: N Carolina- Where ‘No’ Doesn’t Mean ‘No’ When It Comes to Rape and Sexual Assault. 5/16: Boulder police officer John Smyly to resign. The Boulder police officer who confronted a black Naropa student picking up trash outside his residence in March was found in violation of department policies and is resigning following an internal investigation. 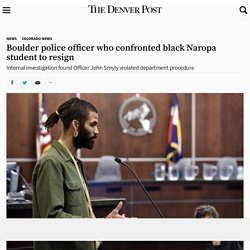 The officer was identified today as 40-year-old John Smyly, a 14-year veteran of the department with no prior disciplinary action. Smyly, who had been on paid administrative leave since the incident, resigned prior to the conclusion of the disciplinary process, but police indicated the process would have likely resulted in suspension or termination. While the department said it could not support a claim of racial profiling in Smyly’s March 1 encounter with Zayd Atkinson, he did violate two department policies: police authority and public trust and conduct. As part of a settlement with the city, Smyly will resign from the police department today but will remain under city employment until February 2020 as he exhausts accrued holiday, sick and administrative leave. 5/16: GOP senators meet w/Kushner on immigration, conclude he's clueless.

Republican senators came away unimpressed from an immigration meeting with Trump son-in-law Jared Kushner and privately questioned whether he even understood the issue, the Washington Post reports. 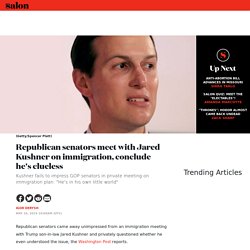 Kushner, President Trump’s point man on the upcoming immigration bill the administration plans to introduce as soon as Thursday, met with Republican senators Tuesday on Capitol Hill to discuss their issues with the plan. While senators publicly voiced support for the plan, Republicans privately expressed concern that Kushner was unable to provide “clear answers” to their questions despite a room with a “friendly audience,” the Post reported. As a result, Trump adviser Stephen Miller, a hardline immigration hawk, was reportedly forced to interrupt Kushner to take over the discussion at several points. Throughout the meeting, Kushner dismissed several topics that senators considered crucial to the bill. He told Sen. 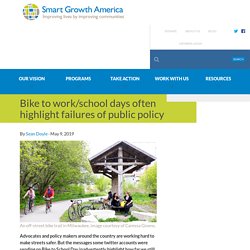 Advocates and policy makers around the country are working hard to make streets safer. 5/7: Sandra Bland Recorded Her Traffic Stop. The Footage Is Finally Out. Sandra Bland’s family is demanding that her case be reopened after her own cellphone footage of her arrest surfaced publicly for the first time Monday, nearly four years after her death. 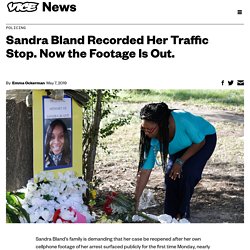 Bland was pulled over on July 10, 2015, for a minor traffic violation as she was driving near the campus of Prairie View A&M University, north of Houston. The encounter resulted in her arrest on suspicion of assaulting a public servant, and she was jailed. Three days later she was found hanged in her cell in what was ruled a suicide — stoking nationwide outrage about racism and police brutality. 5/7: Trump asking courts to hold that the Constitution doesn’t apply to liberals. Treasury Secretary Steven Mnuchin formally denied a request by House Ways and Means Chair Richard Neal on Monday — Neal asked the Treasury Department to turn over several years of President Trump’s tax forms. 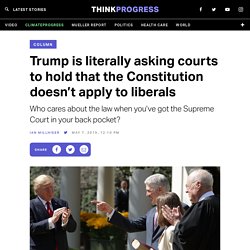 As a matter of law, this wasn’t so much a request as it was a mandatory demand, and Mnuchin’s response to Neal places the secretary in direct violation of the law. While the tax code provides that an individual’s tax forms generally should be kept confidential, one provision of that code provides that the Treasury Secretary “shall furnish” the Ways and Means Committee “with any return or return information specified in” a written request from the committee’s chair.

The law does provide some procedural protection for Trump — his return “shall be furnished to such committee only when sitting in closed executive session” — but the law provides no grounds whatsoever permitting Mnuchin to deny the request. 5/2: Officer punched Oscar Grant and lied about facts in 2009 killing, records show. A police officer involved in the 2009 killing of Oscar Grant on an Oakland train platform repeatedly lied to investigators and had punched the unarmed 22-year-old without justification, according to newly released records. 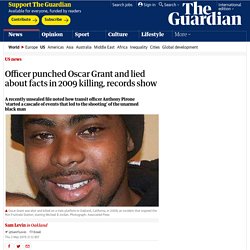 Pirone called Grant the N-word while detaining him, hit him in the face in an “unprovoked” attack, and later gave a series of false statements contradicted by videos, investigators said.