Optimizing Insulin Delivery in Patients With Diabetes Mellitus: Still Room for Improvement - Mayo Clinic Proceedings. Lipohypertrophy - Wikipedia. Lipohypertrophy[1] is a lump under the skin caused by accumulation of extra fat at the site of many subcutaneous injections of insulin. 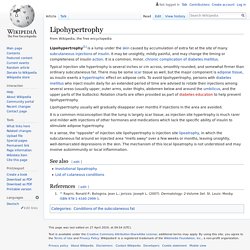 It may be unsightly, mildly painful, and may change the timing or completeness of insulin action. It is a common, minor, chronic complication of diabetes mellitus. Typical injection site hypertrophy is several inches or cm across, smoothly rounded, and somewhat firmer than ordinary subcutaneous fat. There may be some scar tissue as well, but the major component is adipose tissue, as insulin exerts a hypertrophic effect on adipose cells. To avoid lipohypertrophy, persons with diabetes mellitus who inject insulin daily for an extended period of time are advised to rotate their injections among several areas (usually upper, outer arms, outer thighs, abdomen below and around the umbilicus, and the upper parts of the buttocks).

Lipohypertrophy usually will gradually disappear over months if injections in the area are avoided. See also[edit] Lipohypertrophy - Injections and Lumpy Skin. Lipohypertrophy occurs when fatty lumps appear on the surface of the skin Lipohypertrophy can be unpleasant for you from an aesthetic perspective and it can also affect the rate at which insulin is absorbed so can also lead to erratic blood glucose results. 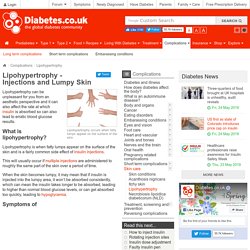 What is lipohypertrophy? Lipohypertrophy is when fatty lumps appear on the surface of the skin and is a fairly common side effect of insulin injections. This will usually occur if multiple injections are administered to roughly the same part of the skin over a period of time. When the skin becomes lumpy, it may mean that if insulin is injected into the lumpy area, it won’t be absorbed consistently, which can mean the insulin takes longer to be absorbed, leading to higher than normal blood glucose levels, or can get absorbed too quickly, leading to hypoglycemia.

1/8/19- *Impact of Insulin Injection and Infusion Routines on Lipohypertrophy and Glycemic Control in Children and Adults with Diabetes. 11/1/17- *An Effective Intervention for Diabetic Lipohypertrophy: Results of a Randomized, Controlled, Prospective Multicenter Study in France_FULL. 9/2016: Injecting Complications and the Role of the Professional_FULL.

10/30/18- Insulin-Related Lipohypertrophy: Lipogenic Action or Tissue Trauma?_FULL. Introduction At present, the daily exogenous insulin replacement for the lifetime is the only available therapeutic option to manage majority of patients with type 1 diabetes mellitus (T1DM) (1). 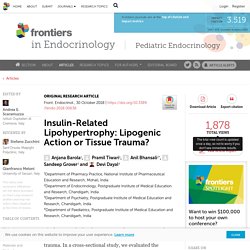 Repeated subcutaneous administration of insulin in the smaller area mount up the local lipogenic effect of insulin and injection-related tissue trauma, consequently, ensues lipohypertrophy in form of fatty lumps underneath the skin of that area (2). These lipohypertrophic swellings are not only unsightly but also may result into marked variability in insulin absorption, subsequently causing glycaemic excursions (3). 9/1/17- Prevalence of lipohypertrophy in insulin‐treated diabetes patients: A systematic review and meta‐analysis_FULL.

Introduction Diabetes mellitus has been an epidemic worldwide, the number of patients with diabetes mellitus all over the world is estimated to reach 642 million by 20401. 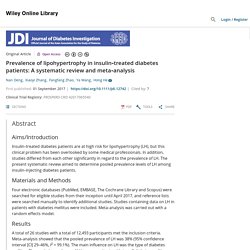 Patients with type 1 diabetes mellitus rely on exogenous insulin whether through continuous subcutaneous insulin infusion or multiple daily insulin injections to help control their blood glucose level. In addition, more and more individuals with type 2 diabetes mellitus start to use insulin because of failure of oral hypoglycemic medications and recommendations from updated guidelines2. Lipohypertrophy (LH) is a common complication of insulin therapy. It has been reported that patients with LH have an almost sixfold higher occurrence of unexplained hypoglycemia compared with patients without LH, and sevenfold higher occurrence of glycemic variability3. Methods Literature search Study selection Data extraction Two investigators extracted the data independently using a specific extraction form. Quality assessment Results.

List of cutaneous conditions. The epidermis is the most superficial layer of skin, a squamous epithelium with several strata: the stratum corneum, stratum lucidum, stratum granulosum, stratum spinosum, and stratum basale.[8] Nourishment is provided to these layers by diffusion from the dermis, since the epidermis is without direct blood supply. 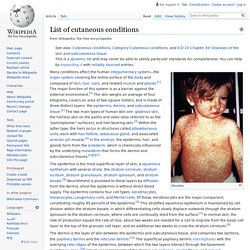 The epidermis contains four cell types: keratinocytes, melanocytes, Langerhans cells, and Merkel cells. Acneiform eruptions[edit] Acneiform eruptions are caused by changes in the pilosebaceous unit.[27][28] Autoinflammatory syndromes[edit] Autoinflammatory syndromes are a group of inherited disorders characterized by bouts of inflammatory skin lesions and periodic fevers.[29][30] Chronic blistering[edit] Conditions of the mucous membranes[edit] Lipogenesis. Lipogenesis is the metabolic process through which acetyl-CoA is converted to triglyceride for storage in fat.[1] The triglycerides in fat are packaged within cytoplasmic lipid droplets. 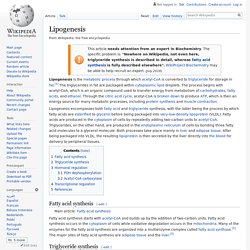 The process begins with acetyl-CoA, which is an organic compound used to transfer energy from metabolism of carbohydrates, fatty acids, and ethanol. Through the citric acid cycle, acetyl-CoA is broken down to produce ATP, which is then an energy source for many metabolic processes, including protein synthesis and muscle contraction. Lipogenesis encompasses both fatty acid and triglyceride synthesis, with the latter being the process by which fatty acids are esterified to glycerol before being packaged into very-low-density lipoprotein (VLDL). Fatty acids are produced in the cytoplasm of cells by repeatedly adding two-carbon units to acetyl-CoA.

Triglycerides, on the other hand, are produced in the endoplasmic reticulum of cells by bonding three fatty acid molecules to a glycerol molecule. EGRIFTA.