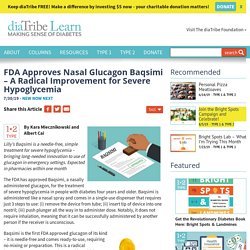 Expected in pharmacies within one month The FDA has approved Baqsimi, a nasally administered glucagon, for the treatment of severe hypoglycemia in people with diabetes four years and older. Baqsimi is administered like a nasal spray and comes in a single-use dispenser that requires just 3 steps to use: (i) remove the device from tube; (ii) insert tip of device into one nostril; (iii) push plunger all the way in to administer dose. Notably, it does not require inhalation, meaning that it can be successfully administered by another person if the receiver is unconscious. Baqsimi is the first FDA approved glucagon of its kind – it is needle-free and comes ready-to-use, requiring no mixing or preparation. In a small study, the difference in user experience was striking. 7/23/19: Misguided Trump Administration Rule Would Take Basic Food Assistance From Working Families, Seniors, and People With Disabilities.

7/23/19: Trump Administration Moving to End Food Stamps for 3 Million People. 7/12/19: Jim Crow’s fingerprints are on Florida’s new voting law. 7/8/19: Workplace bullying trial that shocked France draws to close. Former executives at France Télécom could face prison over organised workplace harassment that led to a spate of staff suicides a decade ago, as a two-month trial that shocked France draws to a close this week. 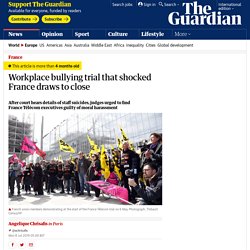 French state prosecutors have urged judges to find the executives guilty of moral harassment and hand down the maximum prison sentence of one year, plus large fines, after details emerged in court of the turmoil felt by workers over systematic bullying tactics aimed at pushing staff to leave. The case against the former state-owned French telecoms firm – known since 2013 as Orange – could set a world precedent with company managers held personally criminally responsible for strategic harassment aimed at forcing workers to resign. Between 2008 and 2009, 35 employees took their own lives. The company had been privatised and was undertaking a restructuring plan during which bosses set out to cut more than a fifth of the workforce – more than 22,000 jobs. The accused deny the charges. 7/8/19: Finland startup creates edible protein from captured CO2.

7/19/19: Short Primer on 'Corn Sweat' & Summer Humidity. As hot, sticky weather descends on much of the country this weekend, some of the stickiness in Midwestern cities may be due to an unexpected phenomenon: “corn sweat.” 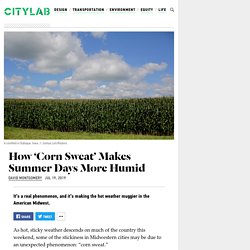 That’s right. Even if you’re in the middle of a concrete jungle, those millions of acres of corn (and other crops) in the country’s heartland are still shaping your weather in powerful—and uncomfortable—ways. “Under conditions like we have now where it’s very warm to begin with, and the atmosphere has a significant amount of moisture in it already, the crop is just adding moisture to that, making conditions feel even more humid,” said Dennis Todey, director of the U.S.

Department of Agriculture’s Midwest Climate Hub. How corn ‘sweats’ Plants, like humans, shed water when it gets too hot. “When [water] converts from that liquid form to that gas form, it takes a lot of energy with it,” said Joe Lauer, a professor and corn agronomist at the University of Wisconsin. One corn plant doesn’t make a big difference. Stressed-out corn. 7/3: Crown Act- California 1st state to ban hair discrimination. SportsPulse: In 2018, is it fair for athletes to have to choose competition over lifestyle? 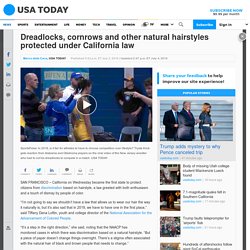 Trysta Krick gets reaction from Alabama and Oklahoma players on the viral video of the New Jersey wrestler who had to cut his dreadlocks to compete in a match. USA TODAY SAN FRANCISCO – California on Wednesday became the first state to protect citizens from discrimination based on hairstyle, a law greeted with both enthusiasm and a touch of dismay by people of color.