"Dupuytren's contracture" addresses a later stage. Dupuytren disease is the most crippling hand problem and affecting many people, especially when they get older. Dupuytren disease typically starts with a tiny nodule in the palm. Eventually cords develop and in progressed stages the affected fingers cannot be fully stretched anymore, thus resulting in what is called "Dupuytren's contracture".
—dupuytren-online

Dupuytren's contracture (also known as Dupuytren's disease, or by the slang term "Viking disease'")[1] is an inherited proliferative connective tissue disorder that involves the hand's palmar fascia.[3] It is named after Baron Guillaume Dupuytren, the surgeon who described an operation to correct the affliction.
—Wikipedia flexion

Dupuytren's (du-pwe-TRANZ) contracture is a hand deformity that usually develops over years. The condition affects a layer of tissue that lies under the skin of your palm. Knots of tissue form under the skin — eventually creating a thick cord that can pull one or more fingers into a bent position.
—Mayo Clinic. 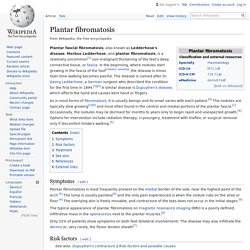 In the beginning, where nodules start growing in the fascia of the foot[citation needed], the disease is minor. Over time walking becomes painful. The disease is named after Dr. Georg Ledderhose, a German surgeon who described the condition for the first time in 1894.[2][3] A similar disease is Dupuytren's disease, which affects the hand and causes bent hand or fingers. Symptoms[edit] The typical appearance of plantar fibromatosis on magnetic resonance imaging (MRI) is a poorly defined, infiltrative mass in the aponeurosis next to the plantar muscles.[6] Only 25% of patients show symptoms on both feet (bilateral involvement). 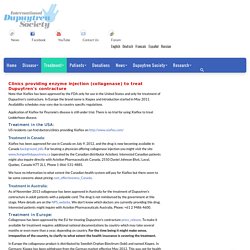 In Europe the brand name is Xiapex and introduction started in May 2011. Availability schedules may vary due to country specific regulations. Application of Xiaflex for Peyronie's disease is still under trial. There is no trial for using Xiaflex to treat Ledderhose disease. Treatment in the USA: US residents can find doctors/clinics providing Xiaflex on Treatment in Canada: Xiaflex has been approved for use in Canada on July 9, 2012, and the drug is now becoming available in Canada background_info. Www.livingwithdupuytrens.ca (operated by the Canadian distributor Actelion).

We have no information to what extent the Canadian health system will pay for Xiaflex but there seem to be some concerns about pricing cost_effectiveness_Canada. Treatment in Australia: Treatment in Europe: The Netherlands: UMC Groningen Dept of Plastic Surgery Prof. Dupuytrens Contracture - Causes, Symptoms, and Treatment. Tip 1: Start with the basics like "carpal tunnel. 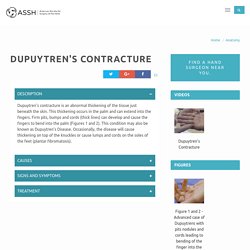 " You can always add more words later to narrow Tip 2: Choose words carefully and avoid terms that do not concern surgery. Tip 3: Avoid capitalization and conjunctions like "the," "and," "or," or "in. " Also, avoid using media types like "video," "article," and "picture. " Tip 4: Your results can be refined by using either the tabs at the top (Video, Articles/WEB, Images, JHS, Products/Vendors), or the filters on the left (Filter by Source, Filter by Format, Filter by Purpose, etc.). Dupuytren's contracture. Dupuytren's (du-pwe-TRANZ) contracture is a hand deformity that usually develops over years. 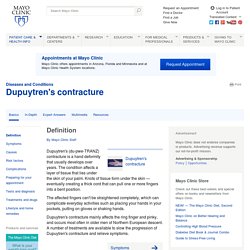 The condition affects a layer of tissue that lies under the skin of your palm. Knots of tissue form under the skin — eventually creating a thick cord that can pull one or more fingers into a bent position. The affected fingers can't be straightened completely, which can complicate everyday activities such as placing your hands in your pockets, putting on gloves or shaking hands. Dupuytren's contracture mainly affects the ring finger and pinky, and occurs most often in older men of Northern European descent. A number of treatments are available to slow the progression of Dupuytren's contracture and relieve symptoms. Needle Aponeurotomy (NA), percutaneous needle fasciotomy (PNF) Needle Aponevrotomy, also called needle aponeurotomy or percutaneous needle fasciotomy (PNF) and in the U.S. usually abbreviated as NA, is a minimal invasive technique that originally became popular in France more than 20 years ago (according to Eliot the first fasciotomy was already performed by Cline in London in the late 18th century, fasciotomy was also suggested by Astley Cooper in 1822 and Guillaume Dupuytren in 1832). 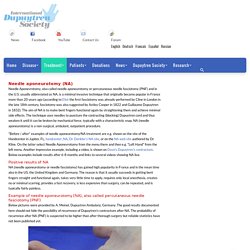 The aim of NA is to make bent fingers functional again by straightening them and achieve minimal side effects. The technique uses needles to puncture the contracting (blocking) Dupuytren cord and thus weaken it until it can be broken by mechanical force, typically with a characteristic snap. NA (needle aponeurotomy) is a non-surgical, ambulant, outpatient procedure. Dupuytren's contracture - Wikipedia.