6/4/20: Alabama parole board returns from hiatus to deny parole in a vast majority of May cases. 3/30/20: Covid-19 at Cook County Jail: 134 inmates confirmed positive. The Cook County sheriff’s office announced Monday that 33 more inmates at the Cook County Jail have tested positive for COVID-19, raising the total number of confirmed cases among detainees to 134. 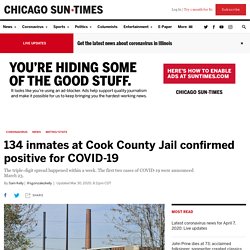 The triple-digit spread happened within a week. The first two cases of COVID-19 were announced March 23. One of the two men diagnosed, a 42-year-old Albany Park resident serving out a 90-day sentence for an aggravated DUI, said the environment inside the jail “was like Disneyland for coronavirus.” He was released last week and is now self-quarantining at home. “I didn’t bring it in,” he told the Chicago Sun-Times. Nine detainees have tested negative, and 20 staff members have also tested positive, the sheriff’s office said. MDOC Response & Information on COVID-19. The Michigan Department of Corrections is taking a series of measures to protect its staff, the prison population and the community as positive cases of coronavirus disease 2019 (COVID-19) have been identified in the state. 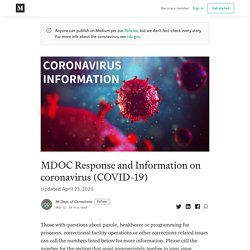 There are now 35,291 cases of coronavirus disease 2019 (COVID-19) in Michigan as of April 23. Personal Protective Equipment, cleaning and mitigation measures Michigan State Industries has produced masks for all prisoners and correctional facility staff to wear. Each employee and prisoner received three masks each and the masks can be laundered and worn again. Facility staff are also permitted to bring their own PPE, such as masks, gloves and gowns. Visits and Transfers. 3/30/20: ‘Jails Are Petri Dishes’: Inmates Freed as the Virus Spreads Behind Bars. “We’re not going to keep them in jail because they don’t have a home,” Sheriff Villanueva said. 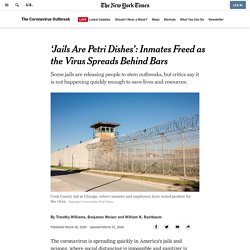 California has the second-largest prison population in the country, after Texas, and at least 12 state prison employees there have tested positive for the coronavirus. Staff members and inmates have also tested positive at correctional facilities in Florida, Texas, Michigan, Pennsylvania, New York and Washington State, among others, and advocates said there were almost certainly many undetected cases across the country. Most inmates in county jails are either serving sentences for minor crimes or are awaiting trial, but state prisons — which hold the majority of the nation’s 2.3 million incarcerated people, most of whom were convicted of felonies — are less likely to make large-scale releases. 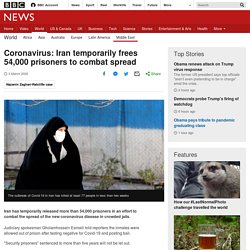 Judiciary spokesman Gholamhossein Esmaili told reporters the inmates were allowed out of prison after testing negative for Covid-19 and posting bail. "Security prisoners" sentenced to more than five years will not be let out. The jailed British-Iranian charity worker Nazanin Zaghari-Ratcliffe may be freed soon, according to a British MP. Tulip Siddiq cited the Iranian ambassador to the UK as saying that Ms Zaghari-Ratcliffe "may be released on furlough today or tomorrow". Image Copyright @TulipSiddiq @TulipSiddiq. 3/16/20; Applauding Release of Prisoners in Ohio Due to Coronavirus Threat, ACLU Calls on Officials Nationwide to Do the Same.

The ACLU called on prisons and detention centers throughout the U.S. to release high-risk and elderly inmates on Monday and applauded an Ohio county court for ordering the release of hundreds of prisoners to prevent the spread of the coronavirus. 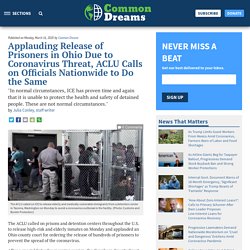 After a special Saturday morning session, the Cuyahoga County Court in Ohio ordered the release of inmates from the county jail who were at risk for becoming very ill or dying if they contract COVID-19, the respiratory disease which has infected more than 4,100 people in the U.S. as of press time. The court settled some cases with some people who had pled guilty to crimes and released others into the community on house arrest. "The goal of this is to protect the community and the safety of the inmates," Administrative Judge Brendan Sheehan told News Channel 11 in Ohio. Calling mass incarceration "a clear public health risk," the ACLU urged other states, counties, and cities to follow Ohio's lead. Get our best delivered to your inbox. Mayor Bowser..#DecarcerateDC NOW. #DecarcerateDC On March 11, 2020, Mayor Muriel Bowser declared a public health emergency and issued an order identifying COVID-19 as an imminent threat to the health, safety, and welfare of D.C. residents. 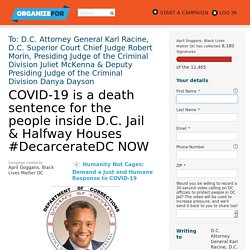 Ten days later, Attorney General Karl Racine proclaimed to the nation that “in [these] ever-challenging times, prosecutors must stand up for the human dignity and constitutional rights of those in custody who are too easily forgotten.” Yet, for the roughly 1,600 people at the D.C. Jail where the virus has been spreading rapidly, Racine has done absolutely nothing. Public health officials have repeatedly warned that the only way to flatten the curve and to save countless lives is to immediately release incarcerated people.

Now we are calling on D.C. 1) Exercise their authority to decarcerate the D.C. Untitled.