"CIA's employees are professionals and will serve the First Customer to the best of their ability, but they certainly aren't fools," said former CIA analyst Aki Peritz.

"They've all heard the hostile rhetoric directed at them from Donald Trump... and one prepared kumbaya speech isn't going to change the real concerns CIA's workforce — from the 7th floor to the greenest trainee — have with their new boss." CIA.gov. President Obama Orders 'Full Review' Of Hacking During 2016 Election. President Obama meets with members of his national security team and cybersecurity advisers in February. 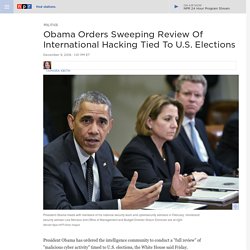 Homeland security adviser Lisa Monaco and Office of Management and Budget Director Shaun Donovan are at right. Mandel Ngan/AFP/Getty Images hide caption toggle caption Mandel Ngan/AFP/Getty Images President Obama meets with members of his national security team and cybersecurity advisers in February. President Obama has ordered the intelligence community to conduct a "full review" of "malicious cyber activity" timed to U.S. elections, the White House said Friday. The review will go all the way back to the 2008 campaign when China was found to have hacked both the Obama and McCain campaigns, White House spokesman Eric Schultz said at a Friday press briefing.

In the 2016 election, U.S. intelligence officials charged that Russia had interfered. Shortly after that, WikiLeaks began posting emails hacked from Clinton campaign Chairman John Podesta's Gmail account. U.S. Formally Accuses Russia Of Hacking Democratic Party. The U.S. is now formally blaming Russia for the hacks and leaks that have played such a big part in this year's presidential race. 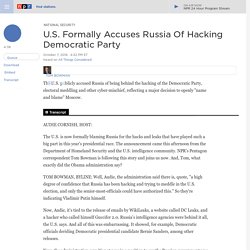 The announcement came this afternoon from the Department of Homeland Security and the U.S. intelligence community. NPR's Pentagon correspondent Tom Bowman is following this story and joins us now. And, Tom, what exactly did the Obama administration say? TOM BOWMAN, BYLINE: Well, Audie, the administration said there is, quote, "a high degree of confidence that Russia has been hacking and trying to meddle in the U.S. election, and only the senior-most-officials could have authorized this. " So they're indicating Vladimir Putin himself. Now, Audie, it's tied to the release of emails by WikiLeaks, a website called DC Leaks, and a hacker who called himself Guccifer 2.0. Now, the administration says it's not now in a position to say the Russian government was probing election systems on the state level, as we saw in Arizona and Illinois. U.S. Accuses Russia Of Election Year Cyber-Meddling. 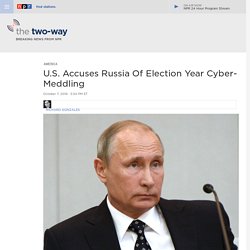 The U.S. blamed the Russian government for the hacking of American political sites and accused Moscow of trying to interfere with the upcoming presidential election. Alexei Nikolsky/AP hide caption toggle caption Alexei Nikolsky/AP Russian President Vladimir Putin listens during the opening session of the newly elected State Duma, Russia's lower house of parliament, in Moscow. Updated at 7:45 with remarks about U.S. Updated at 7:00pm ET with sanctions threatened against Russia The United States has officially blamed Russia for the hacking of computers of the Democratic National Committee and other political organizations, and it accused Moscow of trying to interfere with this year's election process.

The statement adds: "These thefts and disclosures are intended to interfere with the US election process. CIA Secret Assessment Says Russia Interfered With U.S. Election To Help Donald Trump Win. Saul Loeb/AFP/Getty Images Updated at 1:49 p.m. 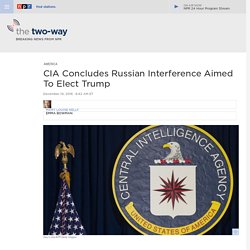 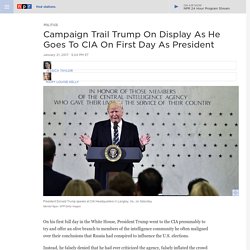 Mandel Ngan /AFP/Getty Images hide caption toggle caption Mandel Ngan /AFP/Getty Images President Donald Trump speaks at CIA Headquarters in Langley, Va., on Saturday. On his first full day in the White House, President Trump went to the CIA presumably to try and offer an olive branch to members of the intelligence community he often maligned over their conclusions that Russia had conspired to influence the U.S. elections.

Instead, he falsely denied that he had ever criticized the agency, falsely inflated the crowd size at his inauguration on Friday, attacked the media and told intelligence officers gathered to, "Trust me. It was a rambling speech that was reminiscent of many of his campaign rallies. He made the speech in front of a wall of 117 stars representing those in the agency who had lost their lives in service. He ended his remarks by telling those gathered that, "I love you.