The brutal shooting of Jacob Blake

8/25/20: Protests in Kenosha after police shooting of Jacob Blake. 8/25/20: LeBron James Responds to Police Shooting Jacob Blake. Why Did The Police Shoot Jacob Blake? 8/27/20: Tracking Kyle Rittenhouse in the Fatal Kenosha Shootings. A teenager who walked among protesters in Kenosha, Wis., carrying a military-style semi-automatic rifle was arrested and faces a charge of first-degree intentional homicide in connection with shootings that left two people dead on Tuesday night. 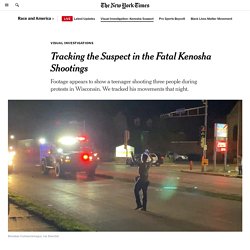 Kyle Rittenhouse, a 17-year-old Illinois resident, appeared on multiple videos taken throughout the night by protesters and bystanders who chronicled the events as peaceful protests gave way to chaos, with demonstrators, armed civilians and others facing off against one another and the police in the darkened streets. The New York Times’s Visual Investigations unit analyzed hours of footage to track Mr. Rittenhouse’s movements in the moments leading up to, and during, the shootings. Mr. Rittenhouse was arrested early Wednesday in his hometown, Antioch, Ill., which is about 30 minutes southwest of the protests in Kenosha, just over the state line. 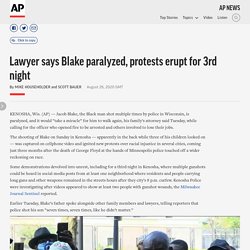 (AP) — Jacob Blake, the Black man shot multiple times by police in Wisconsin, is paralyzed, and it would “take a miracle” for him to walk again, his family’s attorney said Tuesday, while calling for the officer who opened fire to be arrested and others involved to lose their jobs. The shooting of Blake on Sunday in Kenosha — apparently in the back while three of his children looked on — was captured on cellphone video and ignited new protests over racial injustice in several cities, coming just three months after the death of George Floyd at the hands of Minneapolis police touched off a wider reckoning on race.

Some demonstrations devolved into unrest, including for a third night in Kenosha, where multiple gunshots could be heard in social media posts from at least one neighborhood where residents and people carrying long guns and other weapons remained in the streets hours after they city’s 8 p.m. curfew. “But my son matters. Wisconsin Gov. U.S. 8/27/20: Jacob Blake: Officer in Kenosha shooting named. Image copyright BenCrump.com Wisconsin's attorney general has named the officer who shot a black man on Sunday, sparking days of demonstrations. 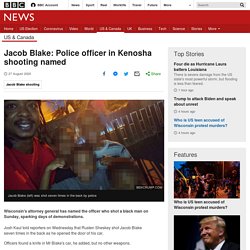 Josh Kaul told reporters on Wednesday that Rusten Sheskey shot Jacob Blake seven times in the back as he opened the door of his car. Officers found a knife in Mr Blake's car, he added, but no other weapons. The shooting has sparked a wave of protests in recent days, some of which have turned violent. A 17-year-old was arrested on Wednesday after two people were killed and another injured amid unrest on Tuesday night. Mr Blake is recovering in hospital and is conscious, but his lawyers fear it will take a "miracle" for him to walk again. Media playback is unsupported on your device. 9/1/20: Trump visits Kenosha, calls violence 'domestic terrorism' KENOSHA, Wis. 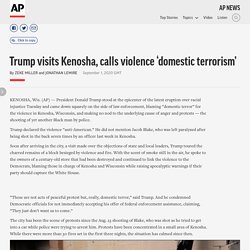 (AP) — President Donald Trump stood at the epicenter of the latest eruption over racial injustice Tuesday and came down squarely on the side of law enforcement, blaming “domestic terror” for the violence in Kenosha, Wisconsin, and making no nod to the underlying cause of anger and protests — the shooting of yet another Black man by police. Trump declared the violence “anti-American.” He did not mention Jacob Blake, who was left paralyzed after being shot in the back seven times by an officer last week in Kenosha.

Soon after arriving in the city, a visit made over the objections of state and local leaders, Trump toured the charred remains of a block besieged by violence and fire. With the scent of smoke still in the air, he spoke to the owners of a century-old store that had been destroyed and continued to link the violence to the Democrats, blaming those in charge of Kenosha and Wisconsin while raising apocalyptic warnings if their party should capture the White House. 9/4/20: Blake's father says paralyzed son optimistic after shooting. MADISON, Wis. 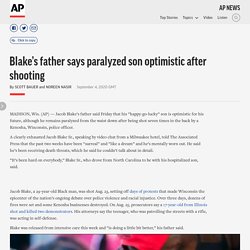 (AP) — Jacob Blake’s father said Friday that his “happy-go-lucky” son is optimistic for his future, although he remains paralyzed from the waist down after being shot seven times in the back by a Kenosha, Wisconsin, police officer. A clearly exhausted Jacob Blake Sr., speaking by video chat from a Milwaukee hotel, told The Associated Press that the past two weeks have been “surreal” and “like a dream” and he’s mentally worn out. He said he’s been receiving death threats, which he said he couldn’t talk about in detail. “It’s been hard on everybody,” Blake Sr., who drove from North Carolina to be with his hospitalized son, said. Jacob Blake, a 29-year-old Black man, was shot Aug. 23, setting off days of protests that made Wisconsin the epicenter of the nation’s ongoing debate over police violence and racial injustice. Blake was released from intensive care this week and “is doing a little bit better,” his father said. 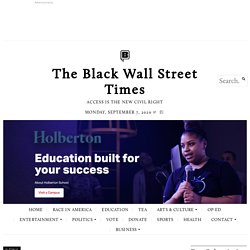