Svetlana Alexievich, Belarussian Voice of Survivors, Wins Nobel Prize in Literature. This video is not currently supported on your browser. 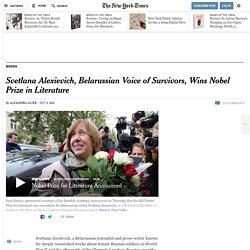 Continue reading the main story Video Svetlana Alexievich, a Belarussian journalist and prose writer known for deeply researched works about female Russian soldiers in World War II and the aftermath of the Chernobyl nuclear disaster, won the Nobel Prize in Literature on Thursday “for her polyphonic writings, a monument to suffering and courage in our time,” the Swedish Academy announced. Ms. Alexievich, 67, is the 14th woman to win the literature prize, and one of just a few Nobel laureates to be recognized for nonfiction.

While the Nobel committee has occasionally awarded the prize to philosophers and historians, including Bertrand Russell and Winston Churchill, it has been more than half a century since a dedicated nonfiction writer has won what many regard as literature’s most prestigious award. The selection of Ms. Continue reading the main story Ms. The stories Ms. Many of her books are woven together from detailed oral histories. Svetlana Alexievich’s Nobel Win. Svetlana Alexievich’s book “Voices from Chernobyl: The Oral History of a Nuclear Disaster” begins with a woman’s account of watching her husband, a firefighter, physically disintegrating in a hospital bed in the days following the April, 1986, nuclear-plant explosion. 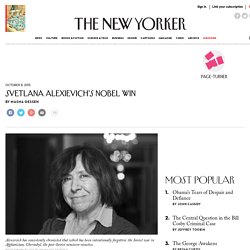 “It’s as good as Shakespeare,” she said of the quality of the woman’s words when I asked her about that part of the book, years ago. “But do you know how long it took to get her to produce those two pages of text?” The first hours—and subsequent hours and hours—of an interview, Alexievich explained, are always taken up by the rehearsing of received memories: newspaper accounts, other people’s stories, and whatever else corresponds to a public narrative that has inevitably already taken hold. Only beneath all those layers is personal memory found.

The Swedish Academy, which announced today that Alexievich will receive the Nobel Prize for Literature, cited the writer for inventing “a new kind of literary genre.” Jacques Rancière and Indisciplinarity. So I’ve never been interested in producing a theory of literature providing instruments that would make it possible to disclose rules, to explain literary works in general and transmit them. 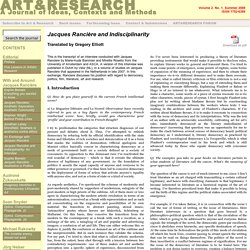 I’ve tried to mark some points of emergence, some points of rupture, some forms of expansion of the meaning of experience, and then to situate their importance vis-à-vis different domains and to make them resonate. For me, what is called literary criticism or film criticism is not a way of explaining or classifying things, but a way of extending them and making them resonate differently. Explaining Flaubert or Balzac or Hugo is of no interest to me whatsoever.

What interests me is to make a character, some words or a piece of syntax resonate vis-à-vis other characters, words, pieces of syntax. Q) The examples you take in your books on literature pertain to what students of literature call the canon. IV. Two layers are super-imposed in my interest in film. Yes, you could say that. V. Ten Theses on Politics. Find using OpenURL Ten Theses on Politics In lieu of an abstract, here is a brief excerpt of the content: Thesis 1:[1] Politics is not the exercise of power. 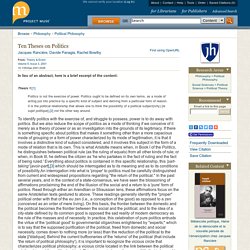 Politics ought to be defined on its own terms, as a mode of acting put into practice by a specific kind of subject and deriving from a particular form of reason. To identify politics with the exercise of, and struggle to possess, power is to do away with politics. Incorrect username or password. Please select your institution to authenticate with Shibboleth. Jacques Rancière. Jacques Rancière (born 1940) is a French philosopher, Professor of Philosophy at European Graduate School in Saas-Fee and Emeritus Professor of Philosophy at the University of Paris (St. 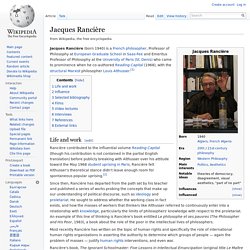 Denis) who came to prominence when he co-authored Reading Capital (1968), with the structural Marxist philosopher Louis Althusser.[1] Life and work[edit] Rancière contributed to the influential volume Reading Capital (though his contribution is not contained in the partial English translation) before publicly breaking with Althusser over his attitude toward the May 1968 student uprising in Paris; Rancière felt Althusser's theoretical stance didn't leave enough room for spontaneous popular uprising.[2] Since then, Rancière has departed from the path set by his teacher and published a series of works probing the concepts that make up our understanding of political discourse, such as ideology and proletariat.