First Look of “Om Namo Venkatesaya” To Be Soon! ‘Babu Bangaram’ Gets Release Date. Pawan Kalyan, Ram Charan in a Multistarrer ? Yet Another Whacky Title for Allari Naresh. Posted on 14 July 2016 11:15 AM Allari Naresh who was on a roll with back to back movies till a few years ago has slowed down a bit for a while as some of his films haven’t matched up the expectations. 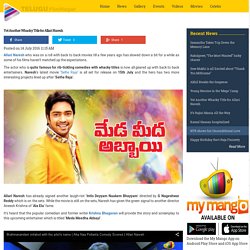 The actor who is quite famous for rib-tickling comedies with whacky titles is now all geared up with back to back entertainers. It’s Rajini Mania All the Way. Title fixed for Rana and Teja’s Next ? 100 Days Of Love Audio Launch Tomorrow. It’s Dream Come True for Rakul. Goddess Durga Devi Mantras. Nayaki’s Theme Trailer Released. Pawan Kalyan Ready to Work in a Multistarrer. Worrying the Makers of Babu Bangaram. ‘Babu Bangaram‘ is an upcoming Telugu romantic-comedy film directed by Maruthi starring Venkatesh and Nayanthara in the lead roles. 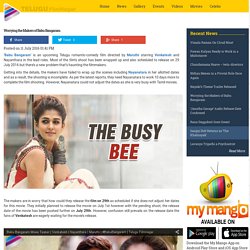 Most of the film’s shoot has been wrapped up and also scheduled to release on 29 July 2016 but there’s a new problem that’s haunting the filmmakers. Getting into the details, the makers have failed to wrap up the scenes including Nayanatara in her allotted dates and as a result, the shooting is incomplete. As per the latest reports, they need Nayanatara to work 10 days more to complete the film shooting. Duniya Se Ki Dosti Miuva Hindi Song. 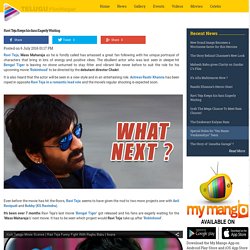 The ebullient actor who was last seen in sleeper-hit Bengal Tiger is leaving no stone unturned to stay fitter and vibrant like never before to suit the role for his upcoming movie ‘Robinhood‘ to be directed by the debutant director Chakri. It is also heard that the actor will be seen in a new style and in an entertaining role. Actress Rashi Khanna has been roped in opposite Ravi Teja in a romantic lead role and the movie’s regular shooting is expected soon.

Even before the movie has hit the floors, Ravi Teja seems to have given the nod to two more projects one with Anil Ravipudi and Bobby (KS Ravindra). Grab The Mega Chance To Meet Ram Charan! Hindi Devotional Songs of Kabir Das. Akira Trailer Out. After two Bollywood Superhits ‘Ghajini’ and ‘Holiday’, South Indian sensational director AR Murugadoss is back again with his third direct Bolly venture ‘Akira‘, with the tagline ‘No One Will Be Forgiven‘. 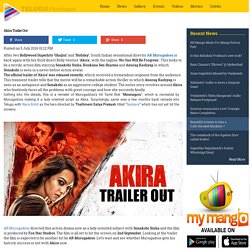 This looks to be a terrific action film starring Sonakshi Sinha, Konkana Sen Sharma and Anurag Kashyap in which Sonakshi is seen in a never before action avatar. The official trailer of ‘Akira’ was released recently, which received a tremendous response from the audience. This transient trailer tells that the movie will be a remarkable action thriller in which Anurag Kashyap is seen as an antagonist and Sonakshi as an aggressive college student. The entire story revolves around Akira who fearlessly faces all the problems with great courage and how she succeeds finally. Getting into the details, this is a remake of Murugadoss’s hit Tamil flick “Mounaguru“, which is recreated by Murugadoss making it a lady oriented script as Akira.

The comeback of the ‘Ageless Diva’ called Sridevi. The actress who ruled for over 20 years, has taken the break from movies post her marriage to the filmmaker Boney Kapoor and made a strong comeback with ‘English Vinglish‘ in 2012. 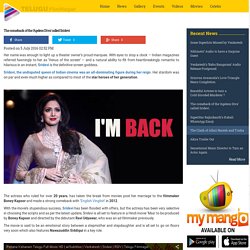 With the movie’s stupendous success, Sridevi has been flooded with offers, but the actress has been very selective in choosing the scripts and as per the latest update, Sridevi is all set to feature in a Hindi movie ‘Maa’ to be produced by Boney Kapoor and directed by the debutant Ravi Udyawar, who was an ad filmmaker previously. The movie is said to be an emotional story between a stepmother and stepdaughter and is all set to go on floors very soon which also features Nawazuddin Siddiqui in a key role. The Clash of Allari Naresh and Trisha. Allari Naresh‘s upcoming movie ‘Selfie Raja‘ is all geared up for a grand release on 15th July and the whole unit is pretty impressive about the movie’s output and expecting it to be a sure shot hit. 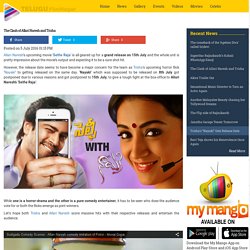 However, the release date seems to have become a major concern for the team as Trisha‘s upcoming horror flick ‘Nayaki‘ to getting released on the same day. ‘Nayaki’ which was supposed to be released on 8th July got postponed due to various reasons and got postponed to 15th July, to give a tough fight at the box-office to Allari Naresh’s ‘Selfie Raja’. SuperStar Rajinikanth’s Kabali WhatsApp Emoji. In an age when stardom is evanescent, Rajinikanth is that rare actor who continues to be a marquee draw even after over 35 years in showbiz. 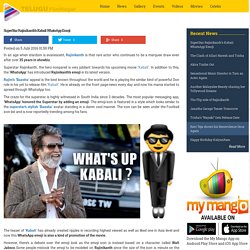 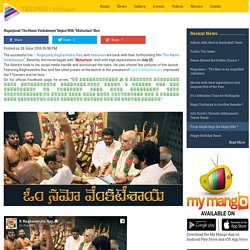 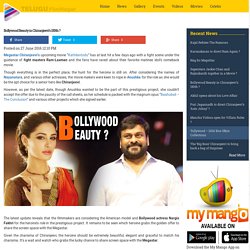 Though everything is in the perfect place, the hunt for the heroine is still on. After considering the names of Nayanatara, and various other actresses, the movie makers were keen to rope in Anushka for the role as she would be the apt choice for a senior hero like Chiranjeevi. However, as per the latest date, though Anushka wanted to be the part of this prestigious project, she couldn’t accept the offer due to the paucity of the call sheets, as her schedule is packed with the magnum opus “Baahubali – The Conclusion” and various other projects which she signed earlier. 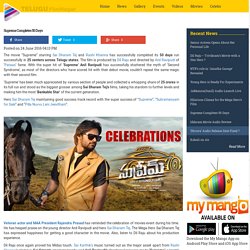 The film is produced by Dil Raju and directed by Anil Ravipudi of ‘Pataas‘ fame. With the super hit of ‘Supreme’ Anil Ravipudi has successfully shattered the myth of ‘Second Syndrome’, as most of the directors who have scored hit with their debut movie, couldn’t repeat the same magic with their second film. ‘Supreme’ has been much appreciated by various section of people and collected a whopping share of 25 crores in its full run and stood as the biggest grosser among Sai Dharam Tej’s films, taking his stardom to further levels and making him the most ‘Bankable Star‘ of the current generation.

Telugu Video Calendar. Budding Actress Bags another Biggie. Aisa Kohi Na Mila Hindi Devotional Song. Kabir Das Popular Devotional Songs. Filmfare Awards – ‘Best Actor’ Mahesh Babu. Posted on 19 June 2016 12:08 PM Tollywood Superstar Mahesh Babu has added one more prestigious award to his kitty. Best of Kabir Ke Dohe. Allu Sirish’s ‘Srirastu Subhamastu’ Ready for Release. Posted on 18 June 2016 10:04 AM The latest update reveals that the movie has completed a song which in Kashmir schedule and the last schedule has been wrapped up completely. Produced by the mega producer Allu Arvind, this film has Lavanya Tripathi as the female lead with the ensemble cast of Prakash Raj, Rao Ramesh, Sumalatha and Tanikella Bharani. The movie is expected to be released in the month of July.

Untitled. Allu Arjun proves his Box-office Stamina. Lord Ganesha Popular Devotional Songs. Goddess Durga Devi Mantras. Telugu Video Calendar. Shirdi Sai Baba Hindi Devotional Songs. Nani Has a Point to Prove. After few duds, Nani bounced back with some of the most memorable films like Yevade Subramanyam, Bale Bale Magadivoy, and Krishnagadi Veera Premagadha and is all set to begin the second hat trick with the upcoming movie “Gentleman” which is slated for release on 17th June. Nani, who never shies away from the experiments is all set to prove his mettle with yet another experimental entertainer “Gentleman” and wants to prove the detractors wrong who have been constantly alluring Nani to take up a run-of-the-mill kind subjects instead of different ones with the movie’s success.