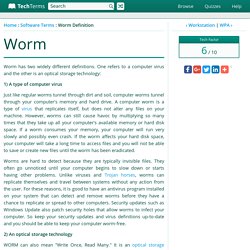 One refers to a computer virus and the other is an optical storage technology: 1) A type of computer virus Just like regular worms tunnel through dirt and soil, computer worms tunnel through your computer's memory and hard drive. A computer worm is a type of virus that replicates itself, but does not alter any files on your machine. However, worms can still cause havoc by multiplying so many times that they take up all your computer's available memory or hard disk space. Worms are hard to detect because they are typically invisible files. 2) An optical storage technology WORM can also mean "Write Once, Read Many. " Today, most optical drives are based on either CD-R or DVD-R technology. TechTerms - The Tech Terms Computer Dictionary.

Worms - How Computer Viruses Work. A worm is a computer program that has the ability to copy itself from machine to machine. 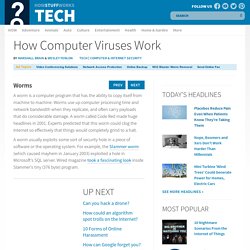 Worms use up computer processing time and network bandwidth when they replicate, and often carry payloads that do considerable damage. A worm called Code Red made huge headlines in 2001. Experts predicted that this worm could clog the Internet so effectively that things would completely grind to a halt. A worm usually exploits some sort of security hole in a piece of software or the operating system. For example, the Slammer worm (which caused mayhem in January 2003) exploited a hole in Microsoft's SQL server. Worms normally move around and infect other machines through computer networks. The Code Red worm slowed down Internet traffic when it began to replicate itself, but not nearly as badly as predicted. The Code Red worm had instructions to do three things: Upon successful infection, Code Red would wait for the appointed hour and connect to the www.whitehouse.gov domain. The Difference Between a Virus, Worm and Trojan Horse. Updated December 14, 2015 / Posted October 28, 2004 By Vangie Beal The most common blunder people make when the topic of a computer virus arises is to refer to a worm or Trojan horse as a virus. 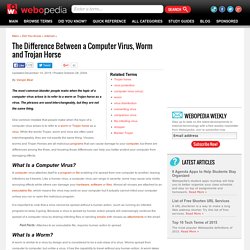 The phrases are used interchangeably, but they are not the same thing. What is a Computer Worm? A computer worm is a self-replicating computer program that penetrates an operating system with the intent of spreading malicious code. 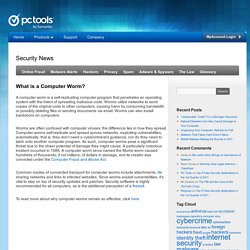 Worms utilize networks to send copies of the original code to other computers, causing harm by consuming bandwidth or possibly deleting files or sending documents via email. Worms can also install backdoors on computers. Worms are often confused with computer viruses; the difference lies in how they spread. Computer worms self-replicate and spread across networks, exploiting vulnerabilities, automatically; that is, they don’t need a cybercriminal’s guidance, nor do they need to latch onto another computer program. As such, computer worms pose a significant threat due to the sheer potential of damage they might cause. Common modes of connected transport for computer worms include attachments, file sharing networks and links to infected websites.

Common Threats. Learn about the latest online scams and what you should know to ensure safe Internet browsing. 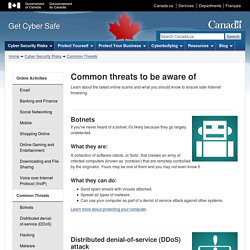 If you've never heard of a botnet, it's likely because they go largely undetected. What they are: A collection of software robots, or 'bots', that creates an army of infected computers (known as ‘zombies') that are remotely controlled by the originator. Yours may be one of them and you may not even know it. Norton Security Center. The 11 most common computer security threats… And what you can do to protect yourself from them. 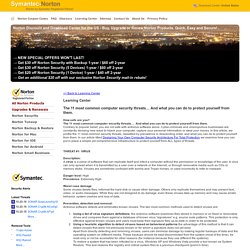 How safe are you? The 11 most common computer security threats… And what you can do to protect yourself from them. Contrary to popular belief, you are not safe with antivirus software alone. Cyber-criminals and unscrupulous businesses are constantly devising new ways to hijack your computer, capture your personal information or steal your money. In this article, we profile the 11 most common security threats, classified by prevalence in descending order, and what you can do to protect yourself from them. Description: A virus is a piece of software that can replicate itself and infect a computer without the permission or knowledge of the user. Danger level: High Prevalence: Extremely High Worst case damage: Some viruses delete files, reformat the hard disk or cause other damage. Prevention, detection and removal: Antivirus software detects and eliminates known viruses. Description: Danger level: Low. Computer Threats. If you do not take measures to keep your computer safe, your computer -- and you -- could become the target of a cybercrime. 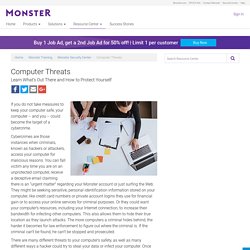 Cybercrimes are those instances when criminals, known as hackers or attackers, access your computer for malicious reasons. You can fall victim any time you are on an unprotected computer, receive a deceptive email claiming there is an “urgent matter” regarding your Monster account or just surfing the Web. They might be seeking sensitive, personal identification information stored on your computer, like credit card numbers or private account logins they use for financial gain or to access your online services for criminal purposes. Or they could want your computer’s resources, including your Internet connection, to increase their bandwidth for infecting other computers.