CIA Agent Teaches How To Escape Duct Tape Handcuffs. Skipping breakfast makes you fat, yes. Not exactly - Health & Families - Life and Style - The Independent. For some nutritionists, this idea is an article of faith. 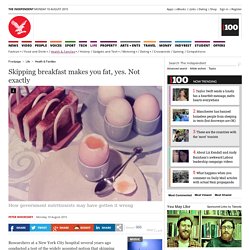 Indeed, it is enshrined in the U.S. Dietary Guidelines, the federal government’s advice book, which recommends having breakfast every day because “not eating breakfast has been associated with excess body weight.” As with many nutrition tips, though, including some offered by the U.S. Dietary Guidelines, the tidbit about skipping breakfast is based on scientific speculation, not certainty, and indeed, it may be completely unfounded, as the experiment in New York indicated.

At 8:30 in the morning for four weeks, one group of subjects got oatmeal, another got frosted corn flakes and a third got nothing. “In overweight individuals, skipping breakfast daily for 4 weeks leads to a reduction in body weight,” the researchers from Columbia University concluded in a paper published last year. Loading gallery Breakfast at Smithfield 1 of 7 This year, as the U.S. 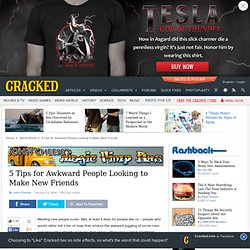 Well, at least it does for people like us -- people who would rather eat a bar of soap than endure the awkward juggling of social rules and misreading of body language that comes with human contact. Confident, practiced people will tell you it's as easy as walking up to a stranger and saying hello, but it's not that simple for us. We don't have their charisma or their gift of being able to blow off the throbbing sting of rejection.

For us, that throb is always there. And for once, I'm not talking about genitals. Unfortunately, we're programmed to be social creatures, and biology will eventually nag us until we break and fill the void with whatever poor bastard we trick into being our emotional caulk. . #5. 5 Ways You're Accidentally Making Everyone Hate You. Have you recently had friends, co-workers, or strangers suddenly get pissed off at you for what seemed like no reason at all? 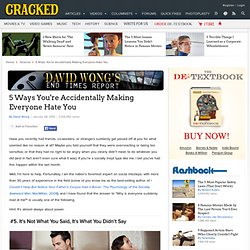 Maybe you told yourself that they were overreacting or being too sensitive, or that they had no right to be angry when you clearly didn't mean to do whatever you did (and in fact aren't even sure what it was). If you're a socially inept type like me, I bet you've had this happen within the last month.

Well, I'm here to help. Fortunately, I am the nation's foremost expert on social missteps, with more than 30 years of experience in the field (some of you know me as the best-selling author of I Couldn't Help But Notice Your Father's Corpse Had a Boner: The Psychology of the Socially Awkward Man, MacMillan, 2008), and I have found that the answer to "Why is everyone suddenly mad at me? " is usually one of the following. Hint: It's almost always about power. #5. Getty For those of us who aren't great with people, we figure that silence is always the safest bet.

. #4. . #3. The-weird-scary-and-ingenious-brain-of-maria-bamford.html?smid=fb-nytimes&WT.z_sma=MG_TWS_20140723&bicmp=AD&bicmlukp=WT. Photo Maria Bamford has a mantra of sorts, and here it is: Do the work. 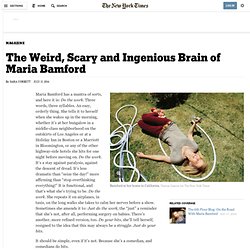 Three words, three syllables. The Psychology of Self-Control. By Maria Popova “Everyone’s self-control is a limited resource; it’s like muscle strength: the more we use it, the less remains in the tank, until we replenish it with rest.” 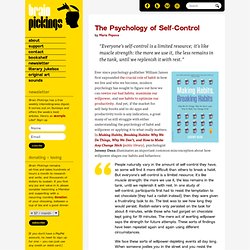 Ever since psychology godfather William James first expounded the crucial role of habit in how we live and who we become, modern psychology has sought to figure out how we can rewire our bad habits, maximize our willpower, and use habits to optimize our productivity. And yet, if the market for self-help books and to-do apps and productivity tools is any indication, a great many of us still struggle with either understanding the psychology of habit and willpower or applying it to what really matters. In Making Habits, Breaking Habits: Why We Do Things, Why We Don’t, and How to Make Any Change Stick (public library), psychologist Jeremy Dean illuminates an important common misconception about how willpower shapes our habits and behaviors: Donating = Loving Brain Pickings has a free weekly newsletter.