AISB50-S17-Sullins-Paper.pdf. OP-Robot-en.pdf. Teaching Medical Robots. By Marlene Cimons, National Science Foundation During the past decade, the growing use of medical robotic devices to perform minimally invasive surgery--procedures done through small incisions—has made it easier for surgeons to do many things they couldn't do before. 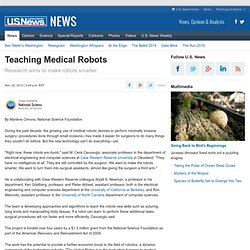 But the new technology can't do everything—yet. "Right now, these robots are dumb," said M. Cenk Cavusoglu, associate professor in the department of electrical engineering and computer sciences at Case Western Reserve University in Cleveland. "They have no intelligence at all. He is collaborating with Case Western Reserve colleague Wyatt S. The team is developing approaches and algorithms to teach the robots new skills such as suturing, tying knots and manipulating body tissues. The project is funded over four years by a $1.3 million grant from the National Science Foundation as part of the American Recovery and Reinvestment Act of 2009. 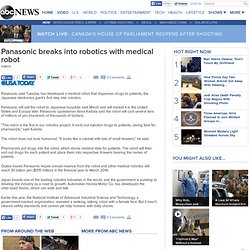 Panasonic will sell the robot to Japanese hospitals next March and will market it in the United States and Europe later. Panasonic spokesman Akira Kadota said the robot will cost several tens of millions of yen (hundreds of thousands of dollars). "This robot is the first in our robotics project. It sorts out injection drugs to patients, saving time for pharmacists," said Kadota. The robot does not look humanoid. Pharmacists put drugs into the robot, which stores medical data for patients. Osaka-based Panasonic hopes annual revenue from the robot and other medical robotics will reach 30 billion yen ($315 million) in the financial year to March 2016. Japan boasts one of the leading robotics industries in the world, and the government is pushing to develop the industry as a road to growth. Are robots the future of surgery, or a pricey marketing gimmick?

The da Vinci Surgery System was the first robotic system to be approved by the FDA for general laparoscopic surgery, and it has dominated the field of robot-assisted surgery since then.Image credit: Intuitive Surgical In 1985, the PUMA 560 robotic surgical arm successfully assisted in a delicate neurosurgical biopsy. 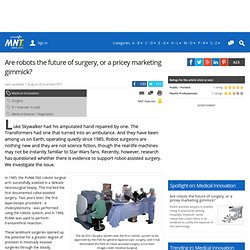 This marked the first documented robot-assisted surgery. Two years later, the first laparoscopic procedure - a cholecystectomy - was performed using the robotic system, and in 1988, PUMA was used to perform transurethral resection. These landmark surgeries opened up the potential for a greater degree of precision in minimally invasive surgeries through the steady, mechanical hand of the robot. By 1990, the first robot approved by the Food and Drug Administration (FDA) - Computer Motion's AESOP system - was assisting in endoscopic surgery. But it was not until 2000 that the operating room became acquainted with robotic surgery as we now know it. 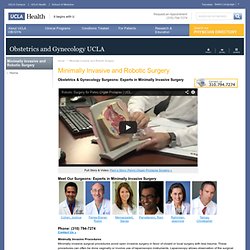 These procedures can often be done vaginally or involve use of laparoscopic instruments. Laparoscopy allows observation of the surgical field through an endoscope or similar device, and is carried out through small incisions in the skin to allow access into the pelvis or abdomen. Minimally invasive surgery should have less operative trauma for the patient than an equivalent invasive procedure. Robotic Operating SystemAt UCLA Gynecologists have the benefit of using the da Vinci™ Surgical System, which enables surgeons to perform with unmatched precision and control – using only a few small incisions. The Slow Rise of the Robot Surgeon. An eight-year-old girl lies in an operating room in Children’s Hospital Boston, propped up on one side, ready for surgery. 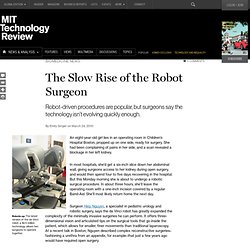 She had been complaining of pains in her side, and a scan revealed a blockage in her left kidney. In most hospitals, she’d get a six-inch slice down her abdominal wall, giving surgeons access to her kidney during open surgery, and would then spend four to five days recovering in the hospital. But this Monday morning she is about to undergo a robotic surgical procedure. In about three hours, she’ll leave the operating room with a one-inch incision covered by a regular Band-Aid. She’ll most likely return home the next day. Surgeon Hiep Nguyen, a specialist in pediatric urology and robotic surgery, says the da Vinci robot has greatly expanded the complexity of the minimally invasive surgeries he can perform.

“People have been disappointed in how slowly the robot is evolving,” says Jon Einarsson, a gynecological surgeon at Brigham and Women’s hospital in Boston. Robotic surgery. A robotically assisted surgical system used for prostatectomies, cardiac valve repair and gynecologic surgical procedures Robotic surgery, computer-assisted surgery, and robotically-assisted surgery are terms for technological developments that use robotic systems to aid in surgical procedures. 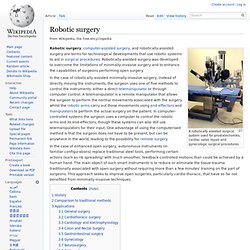