Police can’t find mystery woman in photo with suspected serial killer. Not what it seems: Police are desperately trying to identify the woman pictured cuddling up to accused serial killer Michael Gargiulo (right), whom police fear may have murdered her. 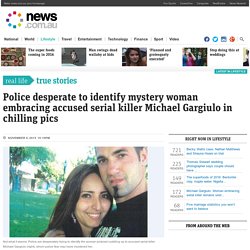 IT looks like any other photograph of a loving couple cuddling up for the camera but unfortunately that scenario could not be further from the truth. The man in the picture is suspected serial killer Michael Thomas Gargiulo and police have no idea who — or where — the woman is, although they fear the worst for her. Gargiulio, 39, has been held at Los Angeles County Jail for the past seven and a half years and is awaiting trial for the murder of three young women and the attempted murder of a fourth.

The former bouncer and airconditioner repairman is known variously as the “Chiller Killer” the “Boy Next Door Killer” and the “Hollywood Ripper” and investigators believe may have murdered up to 10 women. Hollywood Ripper: Michael Gargiulo is feared to have killed as many as 10 women.Source:Supplied. 35 years after Philly teen's death, questions remain. Mike Newall Inquirer Staff Writer October 11, 2010 3:01 AM On Columbus Day 1975, on the final morning of his 16-year life, Martin Michael Burkle rose early for work.

The tall, skinny Kensington youth with long, light-brown hair usually worked nights, pumping gas for $2.39 an hour at the BP station on Spring Garden Street and Delaware Avenue. On this day, he was filling in for a coworker. Before leaving the crowded rowhouse he shared with his mother and six siblings, Burkle tied his oil-stained sneakers and packed a bologna-and-cheese sandwich. Then he grabbed his portable radio, Marlboro cigarettes, and blue-tinted prescription glasses with a faulty left lens. With business slow on the holiday, the station manager later told police, he left Burkle at 11:15 a.m. to man the pumps alone for a time while he ran an errand. Welcome to the Doe Network. Texan is Orem man who vanished in 1986.

OREM — Orem officials are now sure that a man found working on a ranch in Texas is an Orem man who disappeared more than two decades ago. 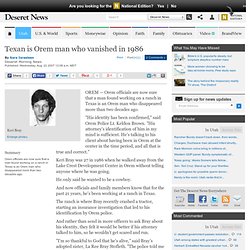 "His identity has been confirmed," said Orem Police Lt. Keldon Brown. "His attorney's identification of him in my mind is sufficient. He's talking to his client about having been in Orem at the center in the time period, and all that is true and correct. " Keri Bray was 27 in 1986 when he walked away from the Lake Crest Development Center in Orem without telling anyone where he was going. Center for Human Identification. Success Stories Maria Isabel Solis At 8:40 a.m. on Tuesday Morning, March 3, 2003, Maria left home to go to George I. 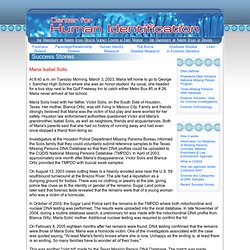 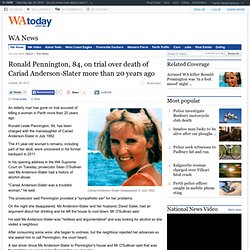 An elderly man has gone on trial accused of killing a woman in Perth more than 20 years ago. Ronald Leslie Pennington, 84, has been charged with the manslaughter of Cariad Anderson-Slater in July 1992. The 41-year-old woman's remains, including part of her skull, were uncovered in his former backyard in 2011. In his opening address in the WA Supreme Court on Tuesday, prosecutor Sean O'Sullivan said Ms Anderson-Slater had a history of alcohol abuse. Advertisement "Cariad Anderson-Slater was a troubled woman," he said. The prosecutor said Pennington provided a "sympathetic ear" for her problems. On the night she disappeared, Ms Anderson-Slater and her husband, David Slater, had an argument about her drinking and he left the house to cool down, Mr O'Sullivan said.

He said Ms Anderson-Slater was "restless and argumentative" and was looking for alcohol so she visited a neighbour. Authorities identify woman's skeletal remains through online DNA database. Published: Friday, Nov. 16, 2012, 9:23 p.m. 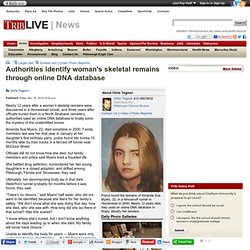 Nearly 12 years after a woman's skeletal remains were discovered in a Homestead tunnel, and three years after officials buried them in a North Strabane cemetery, authorities used an online DNA database to finally solve the mystery of the unidentified bones. Amanda Sue Myers, 22, died sometime in 2000. Victim in 1979 Tiburon murder finally identified. Tammy Vincent was found murdered Sept. 26, 1979, on a Tiburon beach near Blackie's Pasture. 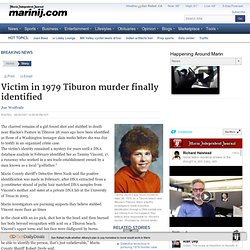 Marin sheriff's investigators made a positive identification through a DNA sample and are closing in on the suspects they believe were responsible for Vincent's murder. (Provided by Vincent family) The charred remains of a girl found shot and stabbed to death near Blackie's Pasture in Tiburon 28 years ago have been identified as those of a Washington teenager slain weeks before she was due to testify in an organized crime case.