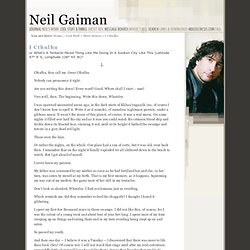 Cthulhu, they call me. Great Cthulhu. Nobody can pronounce it right. Are you writing this down? Herman Wouk Is Still Alive - Stephen King. Image credit: From The Portland Press Herald, September 19, 2009 Instead of going out for a bottle of Orange Driver to celebrate with, she pays off the MasterCard, which has been maxed like forever. 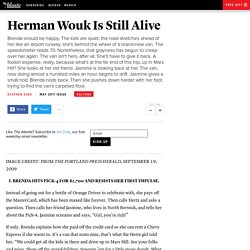 Then calls Hertz and asks a question. Then calls her friend Jasmine, who lives in North Berwick, and tells her about the Pick-4. Jasmine screams and says, “Girl, you’re rich!” If only. Also see: Q&A With Stephen King In an interview the author talks about the creative process, the state of fiction, and more. Jasmine is dubious. Jas married Mitch Robicheau to get away from them, and now, three men, four kids, and eight years later, she’s on her own. “There’s six hundred left over after I paid off the credit balance,” Brenda says. From behind her comes yelling. “I suppose …” Jasmine says, drawing suppose out to four syllables. “Come on, girl! “Maybe I could get some of that government money from my ma before it’s all gone,” Jasmine says thoughtfully. Johnny_appleseed. Cinnamon - Story Page 1. Page 1 of 3 Cinnamon was a princess, a long time ago, in a small hot country, where everything was very old. 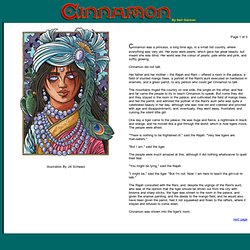 Her eyes were pearls, which gave her great beauty, but meant she was blind. Her world was the colour of pearls: pale white and pink, and softly glowing. Cinnamon did not talk. Her father and her mother -- the Rajah and Rani -- offered a room in the palace, a field of stunted mango trees, a portrait of the Rani's aunt executed on hardwood in enamels, and a green parrot, to any person who could get Cinnamon to talk. The mountains ringed the country on one side, the jungle on the other; and few and far came the people to try to teach Cinnamon to speak. 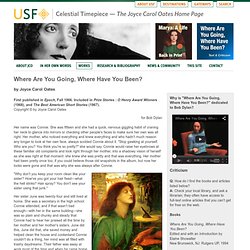 " dedicated to Bob Dylan? Criticism Q: How do I find the books and articles listed below? A: Check your local library, and ask a librarian; they often have access to full-text online articles that you can't get for free on the web. Books Where Are You Going, Where Have You Been? Johnson, GregJoyce Carol Oates: A Study of the Short FictionNew York: Twayne, 1994 Johnson, Greg"The Short Stories (I) : The Wheel of Love"Understanding Joyce Carol OatesColumbia: University of South Carolina Press, 1987, p92-116. 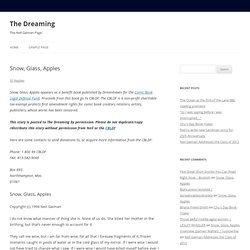 Proceeds from this book go to CBLDF. The CBLDF is a non-profit charitable tax-exempt protects first amendment rights for comic book creators retailers, artists, publishers, whose works has been censored. This story is posted to The Dreaming by permission. Kurt Vonnegut, Harrison Bergeron pg 1-7.htm. Harrison Bergeron Kurt Vonnegut The year was 2081, and everybody was finally equal. 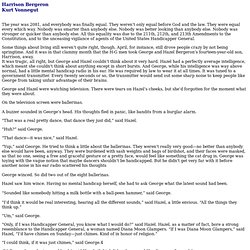 They weren’t only equal before God and the law. They were equal every which way. Nobody was smarter than anybody else. Nobody was better looking than anybody else. Some things about living still weren’t quite right, though. George and Hazel were watching television. On the television screen were ballerinas. A buzzer sounded in George’s head. “That was a real pretty dance, that dance they just did,” said Hazel. “Huh?” “That dance—it was nice,” said Hazel. Cain Rose Up by Stephen King. Garrish walked out of the bright May sunshine and into the coolness of the dorm.

It took his eyes a moment to adjust, and at first Harry the Beaver was just a bodiless voice from the shadows. "It was a bitch, wasn't it? " the Beaver asked. "Wasn't that one a really truly bitch? '