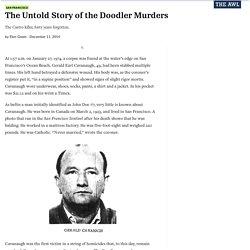 Gerald Earl Cavanaugh, 49, had been stabbed multiple times. His left hand betrayed a defensive wound. His body was, as the coroner’s register put it, “in a supine position” and showed signs of slight rigor mortis. Cavanaugh wore underwear, shoes, socks, pants, a shirt and a jacket. In his pocket was $21.12 and on his wrist a Timex. As befits a man initially identified as John Doe #7, very little is known about Cavanaugh. Cavanaugh was the first victim in a string of homicides that, to this day, remain unsolved. To the extent the case has been written about, the Doodler has been credited with fourteen victims.

Forty years after the fact, the story of the Doodler killings has not been even cursorily told. John Charles Eichinger. David Spanbauer, Serial Child Killer and Rapist — Hunting Season. In so many crime stories of the real and unreal, hunters are often the first to find the body. They are the ones the rural police call to help with searches for lost hikers and missing people. Sometimes their dogs are the first to find the lost person. The hunters stalk through the woods with eyes open, looking for tracks and minute signs of not just their quarry but for any disturbance of the woods. Rarely do they come across the horrifying. Mostly they have a peaceful day in the fields and forests. Two hunters found the body of a 12-year-old girl in a ditch along a country road. 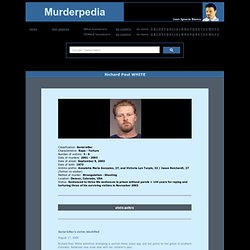 "I wish some day I could hear a reason or answer for how someone could do something so cruel to another human being," said Effie Laub, whose sister was raped, tortured and killed...Family members told White about the children left behind when he killed their mothers in 2002...White stared back, nodded and mouthed the words "I'm sorry. " Atlanta's Missing & Murdered - Main.

F through L. M through R. Charles Schmid: The Pied Piper of Tucson — Secrets in the Sand. It was Life and Time magazines that turned a local story from Tucson, Arizona, into a national abomination. 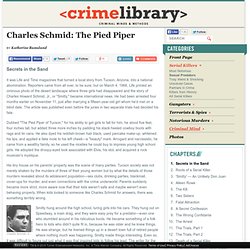 Reporters came from all over, to be sure, but on March 4, 1966, Life printed an ominous photo of the desert landscape where three girls had disappeared and the story of Charles Howard Schmid, Jr., or "Smitty," became international news. He had been arrested four months earlier on November 11, just after marrying a fifteen-year-old girl whom he'd met on a blind date. The article was published even before the juries in two separate trials had decided his fate. Dubbed "The Pied Piper of Tucson," for his ability to get girls to fall for him, he stood five feet, four inches tall, but added three more inches by padding his stack-heeled cowboy boots with rags and tin cans. Cary Stayner. Cary Stayner is an American serial killer currently on death row for the 1999 murders of four women in Yosemite, California. 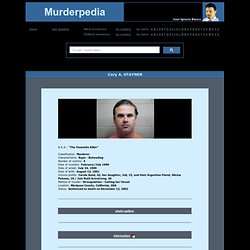 Stayner's victims were Carole Sund, her daughter Julie, Argentine exchange student Silvina Pelosso and park employee Joie Armstrong. Born on August 13, 1961, Stayner claimed after his arrest that he had fantasized about murdering women since the age of seven. Stayner's family life was fairly traumatic; his younger brother, Steven, was kidnapped by pedophile Kenneth Parnell in 1972 and held hostage for eight years. Stayner would later say he felt neglected as his parents grieved over the loss. When Steven escaped and returned home, he received massive media attention (a true crime novel and TV movie were made about the ordeal), further embittering his older brother.

Stayner attempted suicide in 1991 and was arrested in 1997 for possession of marijuana and methamphetamine, although the charges were eventually dropped. By Joe Geringer Evil in Paradise Mrs. Suspects. Five Horrifying Serial Killers You've Probably Never Heard Of. Serial killers are the real-life monsters that we disguise as horror movie villains. 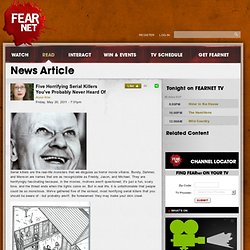 Bundy, Dahmer, and Manson are names that are as recognizable as Freddy, Jason, and Michael. They are horrifyingly fascinating because, in the movies, motives aren't questioned; it's just a fun, scary time, and the threat ends when the lights come on. But in real life, it is unfathomable that people could be so monstrous. We've gathered five of the sickest, most horrifying serial killers that you should be aware of - but probably aren't. Be forewarned: they may make your skin crawl. The "Bloody Benders" All Serial Killers dot com.