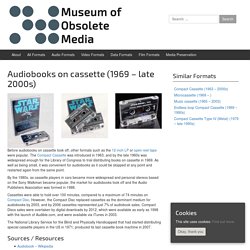 The Compact Cassette was introduced in 1963, and by the late 1960s was widespread enough for the Library of Congress to trial distributing books on cassette in 1969. As well as being small, it was convenient for audiobooks as it could be stopped at any point and restarted again from the same point. By the 1980s, as cassette players in cars became more widespread and personal stereos based on the Sony Walkman became popular, the market for audiobooks took off and the Audio Publishers Association was formed in 1986. Cassettes were able to hold over 100 minutes, compared to a maximum of 74 minutes on Compact Disc. The Evolution of Audiobooks from the First Audiobook to the Digital Age. Stephanie Ciccarelli July 25, 2017 The creation of the audiobook medium has dramatically shaped the way that the world can access valuable information. 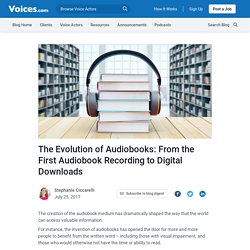 For instance, the invention of audiobooks has opened the door for more and more people to benefit from the written word – including those with visual impairment, and those who would otherwise not have the time or ability to read. Whether the content is entertaining or educational, or anything in between, it’s not uncommon for many of us to capitalize on ‘downtime,’ such as a lengthy commute, or a few hours spent doing household chores, by putting on an audiobook. For anyone wondering how the industry got started, this foray into auditory recording of written works is for you. Bill Nighy talks about audiobooks from Silksoundbooks. Hello, and welcome to Silksoundbooks - the audiobook download website. 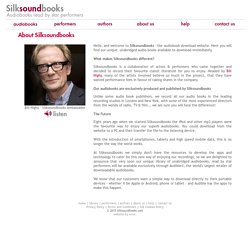 Here you will find our unique, unabridged audio books available to download immediately. What makes Silksoundbooks different? Silksoundbooks is a collaboration of actors & performers who came together and decided to record their favourite classic literature for you to enjoy. Headed by Bill Nighy, many of the artists involved believe so much in the project, that they have waived performance fees in favour of taking shares in the company. Our audiobooks are exclusively produced and published by Silksoundbooks. A HISTORY OF AUDIOBOOKS. The first audiobook - English and Drama blog. A guest post by Matt Rubery, Edison Fellow at the British Library What was the first audiobook? 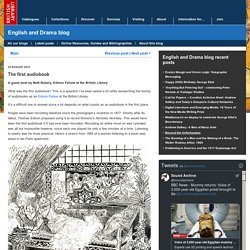 This is a question I’ve been asked a lot while researching the history of audiobooks as an Edison Fellow at the British Library. It’s a difficult one to answer since a lot depends on what counts as an audiobook in the first place. People have been recording literature since the phonograph’s invention in 1877. Shortly after its debut, Thomas Edison proposed using it to record Dickens’s Nicholas Nickleby. From Octave Uzanne and Albert Robida, Contes pour les bibliophiles (Paris: Ancienne Maison Quantin, 1895). Full-length novels were not recorded until the 1930s. The first talking books went out by post to readers in America in October 1934. Woman listening to a talking book circa 1939. The American Foundation for the Blind and Royal National Institute of Blind People continue to record talking books to this very day. Word Revel. [online] Available at: < [Accesse.

When it comes to reading, I embrace every format. 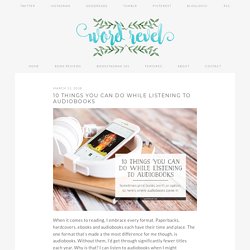 Paperbacks, hardcovers, ebooks and audiobooks each have their time and place. The one format that’s made a the most difference for me though, is audiobooks. Without them, I’d get through significantly fewer titles each year. Why is that? I can listen to audiobooks when I might otherwise not be able to read. If my Twitter and Instagram feeds are anything to go by, many readers have yet to adopt audiobooks. Beat motion sicknessShould you suffer from motion sickness, it can be downright impossible to read on moving vehicles, be they cars, ships, aeroplanes, etc. Audio books in a visual culture. Copyright information Copyright American Culture Association Winter 1995 Access to the complete full text This is a short preview of the document. 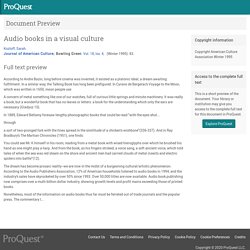 Your library or institution may give you access to the complete full text for this document in ProQuest. According to Andre Bazin, long before cinema was invented, it existed as a platonic ideal, a dream awaiting fulfillment. A concern of metal something like one of our watches, full of curious little springs and minute machinery. In 1889, Edward Bellamy foresaw lengthy phonographic books that could be read "with the eyes shut... through a sort of two-pronged fork with the tines spread in the similitude of a chicken's wishbone"(336-337). You could see Mr. The dream has become prosaic reality--we are now in the midst of a burgeoning cultural/artistic phenomenon. 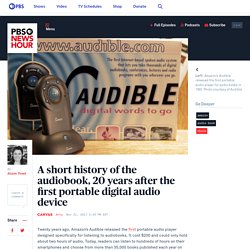 It cost $200 and could only hold about two hours of audio. Today, readers can listen to hundreds of hours on their smartphones and choose from more than 35,000 books published each year on dozens of applications and devices. The Evolution of Audiobooks from the First Audiobook to the Digital Age.