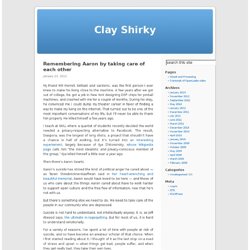 This wasn’t a terribly momentous invention, but it did have one interesting side effect: Fraunhofer also had to figure out how to compress the soundtrack. The result was the Motion Picture Experts Group Format 1, Audio Layer III , a format you know and love, though only by its acronym, MP3. The recording industry concluded this new audio format would be no threat, because quality mattered most. Who would listen to an MP3 when they could buy a better-sounding CD at the record store? Then Napster launched, and quickly became the fastest-growing piece of software in history. If Napster had only been about free access, control of legal distribution of music would then have returned the record labels. How did the recording industry win the battle but lose the war? The people in the music industry weren’t stupid, of course.

But who faces that choice? Howard Rheingold. Syllabi Social Media Literacies (Based on Net Smart) First taught at Stanford, Winter 2013. 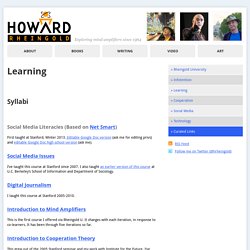 Editable Google Doc version (ask me for editing privs) and editable Google Doc high school version (ask me). Social Media Issues I’ve taught this course at Stanford since 2007. Digital Journalism I taught this course at Stanford 2005-2010. Introduction to Mind Amplifiers This is the first course I offered via Rheingold U. Introduction to Cooperation Theory This grew out of the 2005 Stanford seminar and my work with Institute for the Future. Social Media Literacies I was invited to create this proposed course for Stanford’s Winter 2013 quarter; it’s working its way through the academic bureaucracy. Stanford University Faculty Page Minicourses With the html assistance of Joey Mornin, I developed a series of standalone mini-courses that include videos, links to resources, and a feed from my Diigo/Delicious tags for the topic.

Network Literacy The Public Sphere in the Age of the Internet Cooperation Theory Dr. 15 Inspiring TED Talks. You've selected your classes and shopped for your dorm room. 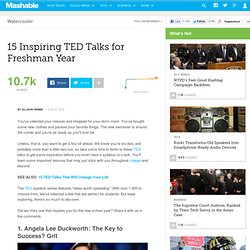 You've bought some new clothes and packed your favorite things. The new semester is around the corner and you're as ready as you'll ever be. Unless, that is, you want to get a tiny bit ahead. We know you're excited, and probably more than a little nervous, so take some time to listen to these TED talks to get some inspiration before you even have a syllabus to crack. You'll learn some important lessons that may just stick with you throughout college and beyond. The TED speaker series features "ideas worth spreading. " Did we miss one that inspires you for the new school year? 15 TED Talks That Will Change Your Life. Feel like getting inspired, motivated or just looking for a feel-good cry? Then look no further. There's no better way to start your day than with a fresh cup of coffee and a nice TED talk to make you feel ready to take on your day.