Yahoo confirms layoff of 2,000 employees in bid to renew company. Yahoo Then and Now: Diagnosing a Sad Decline. Two thousand people losing their jobs is just the worst kind of news and for Yahoo, it’s a culmination of years of decline. 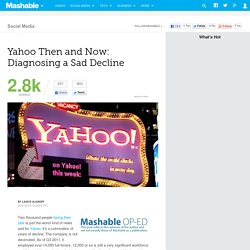 The company is not decimated. As of Q3 2011, it employed over 14,000 full-timers. 12,000 or so is still a very significant workforce and this could be beginning of a big turnaround for the online portal that provides services across a wide variety of categories including news, entertainment, business, business services, finance and multimedia. 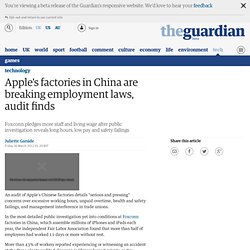 In the most detailed public investigation yet into conditions at Foxconn factories in China, which assemble millions of iPhones and iPads each year, the independent Fair Labor Association found that more than half of employees had worked 11 days or more without rest. More than 43% of workers reported experiencing or witnessing an accident at the three plants audited. Foxconn is China's largest private-sector employer, and its activities have turned the coastal town of Shenzhen into the electronics workshop of the world. Health and safety breaches found by auditors and published on Thursday included blocked exits, lack of or faulty personal protective equipment and missing permits, which the FLA said was remedied when discovered. Thinspo on Tumblr, Pinterest: Can Social Networks Stop It? Pinterest, the latest social-media site to be hailed as the next Facebook or Twitter, has reached an Internet milestone — though a rather suspect one. 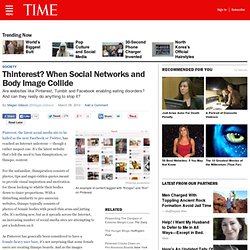 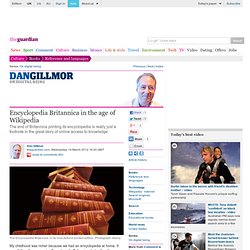 Photograph: Alamy My childhood was richer because we had an encyclopedia at home. It wasn't the ultra-expensive Encyclopedia Britannica, but rather the thinner, more modestly priced World Book. My school library had a full Britannica set, and I spent countless hours immersed in both. Internet Pioneers. Internet Archive: Wayback Machine. Russia Elections 2012: Vladimir Putin Sure Of His Victory In Presidential Vote. MOSCOW — Prime Minister Vladimir Putin has voiced full confidence that he will win Sunday's presidential election in Russia, bluntly dismissing opposition demands and maintaining his strong criticism of the United States. 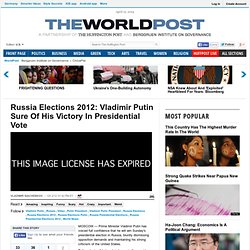 Putin, who is all but certain to regain the presidency, sought to put a positive spin on massive protests that have been held against his 12-year rule, saying they were a "good experience for Russia. " "That situation has helped make government structures more capable, has raised the need for them to think, search for solutions and communicate with the society," Putin said during a meeting with editors of top Western newspapers. The remarks were broadcast by state television and released by his office Friday. The evidence of vote-rigging fueled protests in Moscow that drew tens of thousands of people in the largest show of discontent since the 1991 Soviet collapse. Putin served as president from 2000 to 2008 before shifting into prime ministerial post due to term limits.

Russian opposition sees jailing as Putin warning. The Long Tail. Wired 12.10: The Long Tail. Forget squeezing millions from a few megahits at the top of the charts. 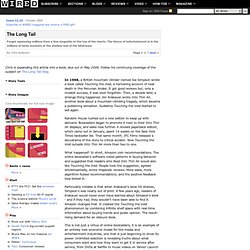 The future of entertainment is in the millions of niche markets at the shallow end of the bitstream. By Chris AndersonPage 1 of 5 next » Chris is expanding this article into a book, due out in May 2006. Follow his continuing coverage of the subject on The Long Tail blog. Story Tools Story Images Click thumbnails for full-size image: Kodak to stop making cameras. Kodak, the company that pioneered home photography, is to give up making cameras after more than 110 years. 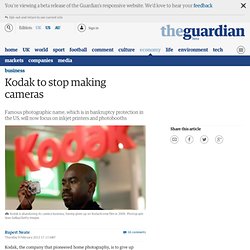 The company, whose little yellow film boxes could once be found throughout the world, said on Thursday it plans to "phase out its dedicated capture devices business", which includes all digital cameras, video cameras and digital photo frames. Google plans home entertainment system. Google is planning a new music streaming system that will be controlled by Android smartphones such as the Galaxy Note. 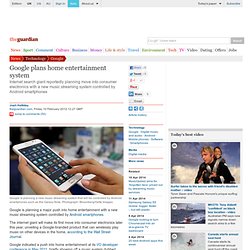 Photograph: Bloomberg/Getty Images Google is planning a major push into home entertainment with a new music streaming system controlled by Android smartphones. The internet giant will make its first move into consumer electronics later this year, unveiling a Google-branded product that can wirelessly play music on other devices in the home, according to the Wall Street Journal. Google searches for Facebook solution - Michelle Quinn. SAN FRANCISCO — Google is in hot water again. 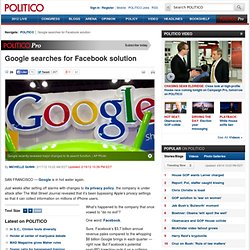 Just weeks after setting off alarms with changes to its privacy policy, the company is under attack after The Wall Street Journal revealed that it’s been bypassing Apple’s privacy settings so that it can collect information on millions of iPhone users. Continue Reading. Google implements privacy policy despite EU warning.

1 March 2012Last updated at 10:00 ET The new privacy policy is rolling out around the world on 1 March Changes made by Google to its privacy policy are in breach of European law, the EU's justice commissioner has said. 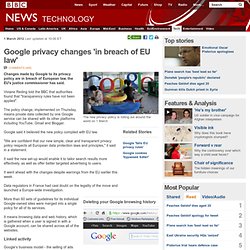 Viviane Reding told the BBC that authorities found that "transparency rules have not been applied". Google Project Glass: will we really wear digital goggles? The first surprising thing about Google Glasses is that anybody thinks this is a new idea (just have a look at this history of mobile augmented reality). Steve Mann, a Canadian known as the father of wearable computing, has been developing systems since the 1980s with obvious industrial, medical and military applications.

Greece bows to further austerity, but bailout delayed until next week. A scene outside a church in the Greek port city of Thessaloniki. Greeks fear austerity measures will only increase hardship in the country. The 'Arab Spring' uprisings of 2011 are being hailed in Washington as the 'Al-Jazeera moment' Syria uprising is now a battle to the death. In the heartland of the uprising against Bashar al-Assad a grinding war of attrition has now become an unforgiving battle to the death.

China to send senior official to Iran for nuclear talks. Netanyahu presses Obama on Iran nuclear program as talks reopen. The leaders met for about two hours in the Oval Office at a crucial juncture in Obama’s effort to restrain Iran’s nuclear ambitions and win the trust of Israel, the closest U.S. ally in the Middle East. Israeli officials afterward called the talks “positive” and said both sides agreed on the need to continue economic and political pressure on Iran. But hours after the meeting, Netanyahu renewed his warning that time for diplomacy was running out. In a fiery speech to a Jewish American advocacy group, he said recent economic sanctions had not slowed Iran’s march to nuclear-weapons capability. “None of us can afford to wait much longer,” Netanyahu told a cheering audience at the American Israel Public Affairs Committee’s annual policy conference in Washington. Iran's Ahmadinejad grilled by lawmakers. Tuesdays with Rupert. Britain's phone-hacking scandal sizzles on.