Youtube. CSR Asia. Long one of Thailand’s island gems, Phuket is the gateway to many holiday destinations in the Andaman Sea. 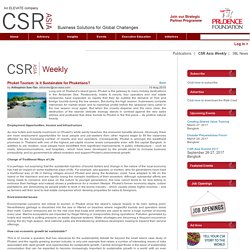 Restaurants, hotels & resorts, tour operators and real estate companies have expanded so rapidly that they far outstrip the demand of Thai and foreign tourists during the low season. But during the high season, businesses compete intensively for market share and to maximize profits before the seasonal rains usher in the low season once again. But when the crowds disperse and the rains clear, the destruction of the islands’ delicate ecology stands in contrast against the very sales pitches and postcards that drew tourists to Phuket in the first place – its pristine natural beauty. Bangkok bombing hits Thailand tourism. Negative Effects of Tourism on Thailand by John Sayers on Prezi. Thailand's booming tourism industry and skyrocketing prices impacts poverty-stricken children. Posted Phuket's booming tourism industry has caused an increase in the amount of young boys and girls that need to be rescued from poverty, say child protection workers on the frontlines of effort on the popular Thai island. 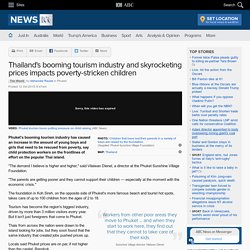 "The demand I believe is higher and higher," said Vilaiwan Dienel, a director at the Phuket Sunshine Village Foundation. "The parents are getting poorer and they cannot support their children — especially at the moment with the economic crisis. " The foundation in Koh Sireh, on the opposite side of Phuket's more famous beach and tourist hot spots, takes care of up to 100 children from the ages of 2 to 18.

Workers from other poor areas they move to Phuket ... and when they start to work here, they find out that they cannot to take care of their kids. Tourism has become the region's biggest industry, driven by more than 3 million visitors every year. Locals said Phuket prices are on par, if not higher than the capital, Bangkok. Post-tsunami orphan crisis. Phuket, Thailand, 10 years after the tsunami: Paradise as usual. Guests were pouring Earl Grey tea and buttering croissants on the sunny beachside deck, and for the manager of Southeast Asia's newest luxury resort, this was a perfect moment. 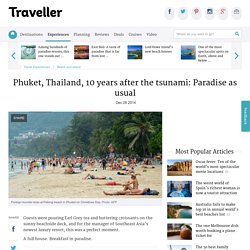 A full house. Breakfast in paradise. Then Anthony Lark's phone rang. A friend, a fellow Australian, was calling from his yacht, having watched in shock as a "tidal wave" smashed into Phi Phi Island. It was December 26, 2004, and on Phuket, Lark's Trisara resort was full for the first time since opening six weeks earlier, after three years of work in design and construction.

"I just stood up and calmly looked out, and the sea was evaporating in front of me. He had no choice but to shatter the idyll. No one was harmed and the resort was protected from the tsunami by a barrier reef, but 60 of 300 staff had family members killed or injured - and then came the cancellations. "It was like, from feast to famine, overnight," Lark says. "With 300 employees and no guests, what do you do?

" "It sort of was just a speed hump. Negative Effects - Ayaka Phuket. Effects of tourism 'must be measured' Thailand should measure the environmental effects of boosting tourism, says president of the Public Policy Studies Institute Foundation, Mingsarn Kaosa-ard. 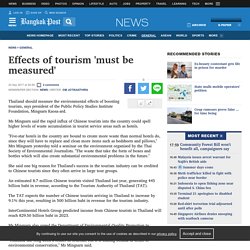 Ms Mingsarn said the rapid influx of Chinese tourists into the country could spell higher levels of waste accumulation in tourist service areas such as hotels. "Five-star hotels in the country are bound to create more waste than normal hotels do, since they will have to replace and clean more items such as bedsheets and pillows," Mrs Mingsarn yesterday told a seminar on the environment organised by the Thai Society of Environmental Journalists. "The waste that take the form of boxes and bottles which will also create substantial environmental problems in the future. " She said one big reason for Thailand's success in the tourism industry can be credited to Chinese tourists since they often arrive in large tour groups. InterContinental Hotels Group predicted income from Chinese tourists in Thailand will reach 829.50 billion baht in 2023. The Economic, Social and Environmental Impacts of Tourism in Thailand.

Disclaimer: This work has been submitted by a student. 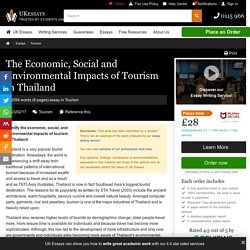 This is not an example of the work produced by our essay writing service. You can view samples of our professional work here. Any opinions, findings, conclusions or recommendations expressed in this material are those of the authors and do not necessarily reflect the views of UK Essays. Identify the economic, social, and environmental impacts of tourism on Thailand Thailand is a very popular tourist destination. Thailand also receives higher levels of tourists as demographics change; older people travel more, more leisure time is available for individuals and because travel has become more sophisticated. There are numerous positive and negative effects of tourism on Thailand’s environmental, social and economical situation.

Effects of tourism 'must be measured'