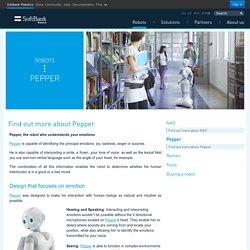 He is also capable of interpreting a smile, a frown, your tone of voice, as well as the lexical field you use and non-verbal language such as the angle of your head, for example. The combination of all this information enables the robot to determine whether his human interlocutor is in a good or a bad mood. Design that focuses on emotion Pepper was designed to make his interaction with human beings as natural and intuitive as possible.

Hearing and Speaking: Interacting and interpreting emotions wouldn't be possible without the 4 directional microphones located on Pepper's head. Seeing: Pepper is able to function in complex environments thanks to his 3D camera and 2 HD cameras that enable him to identify movements, and recognise the emotions on the faces of his interlocutors. Go further… 5 Intriguing Uses for Artificial Intelligence (That Aren't Killer Robots) Rather than leading to the violent downfall of humankind, artificial intelligence is helping people around the world do their jobs, including doctors who diagnose sepsis in patients and scientists who track endangered animals in the wild, experts said Thursday (Oct. 13) at the White House Frontiers Conference in Pittsburgh. 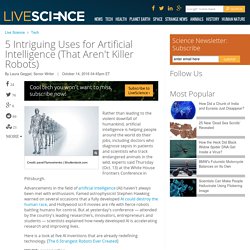 Advancements in the field of artificial intelligence (AI) haven't always been met with enthusiasm. Famed astrophysicist Stephen Hawking warned on several occasions that a fully developed AI could destroy the human race, and Hollywood sci-fi movies are rife with fierce robots battling humans for control. But at yesterday's conference — attended by the country's leading researchers, innovators, entrepreneurs and students — scientists explained how newly developed AI is accelerating research and improving lives. 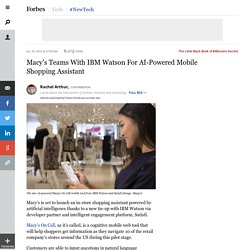 Macy’s On Call, as it’s called, is a cognitive mobile web tool that will help shoppers get information as they navigate 10 of the retail company’s stores around the US during this pilot stage. Customers are able to input questions in natural language regarding things like where specific products, departments, and brands are located, to what services and facilities can be found in a particular store. In return, they receive customised relevant responses. The initiative is based on the idea that consumers are increasingly likely to turn to their smartphones than they are a store associate for help when out at physical retail.

Self-Checkout Skimmers Go Bluetooth. This blog has featured several stories about payment card skimming devices designed to be placed over top of credit card terminals in self-checkout lanes at grocery stores and other retailers. 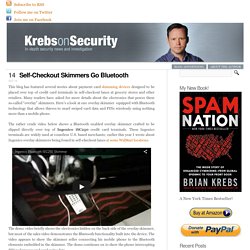 Many readers have asked for more details about the electronics that power these so-called “overlay” skimmers. Labor, tech leaders discuss impact of machines on jobs. Robots haven’t yet replaced most people’s jobs. 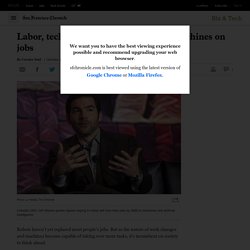 But as the nature of work changes and machines become capable of taking over more tasks, it’s incumbent on society to think ahead. That was the message from Next:Economy, a San Francisco conference on the future of work on Monday and Tuesday sponsored by O’Reilly Media, a Sebastopol company focused on technology developments. “A tsunami of labor disruption” lies ahead, said Andy Stern, a former Service Employees International Union labor leader who’s now promoting the idea of universal basic income, meaning a regular cash payment to all citizens regardless of their income levels.

Yes, Machines Will Take Over Your Jobs. You're reading Entrepreneur India, an international franchise of Entrepreneur Media. 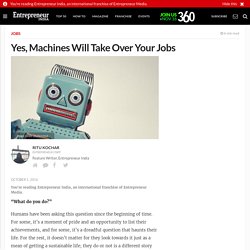 “What do you do?” Humans have been asking this question since the beginning of time. For some, it’s a moment of pride and an opportunity to list their achievements, and for some, it’s a dreadful question that haunts their life. For the rest, it doesn’t matter for they look towards it just as a mean of getting a sustainable life; they do or not is a different story altogether. And soon it wouldn't matter to you as well because you probably wouldn't have one. Ten million jobs at risk from advancing technology. Overall, workers in London are seen as being safer than those in the rest of the UK, with the study predicting 30pc of jobs will go in the capital. 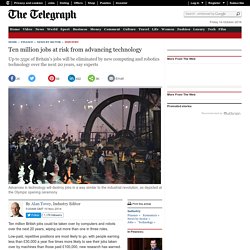 This is because London has fewer manufacturing jobs – a sector likely to face greater automation – as well as a higher proportion of jobs which are creative or require greater skills and knowledge that are less susceptible to being taken on by machines because they cannot replicate human thought. Angus Knowles-Cutler, London senior partner at Deloitte, said: “Technological advances are likely to cause a major shift in the UK labour market in the coming decades.

Unless these changes are fully understood and anticipated, there will be a risk of avoidable unemployment and under-employment. Robots will take over most jobs within 30 years, experts warn. “Robots are doing more and more jobs that people used to do. 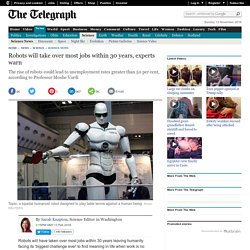 Pharmacists, prison guards, boning chicken, bartending, more and more jobs we’re able to mechanise them. “I believe that society needs to confront this question before it is upon us: If machines are capable of doing almost any work humans can do, what will humans do? "The question I want to put forward is, 'Does the technology we are developing ultimately benefit mankind? '