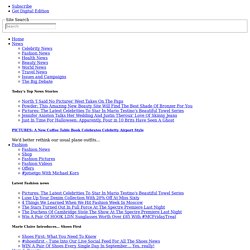 She's been our number one Hollywood actress for a while, ever since her Oscar-winning role in Silver Linings Playbook opposite Bradley Cooper (the two are reuniting very soon in new movie American Hustle, so keep an eye out for that), and the way she so elegantly managed a serious wardrobe malfunction when going to collect said Oscar. And now we've got a whole other reason to crush on J-Law: these gorgeous new Dior pictures from the fashion house's Autumn/Winter magazine.

The Hunger Games actress looks a world away from her usual red-carpet persona, replacing the frothy frocks for a series of beautiful androgynous suits and exquisite tailoring. Belying her mere 23 years, Jennifer looks super-chic and sophisticated in some signature looks from Dior. With her hair swept up in a messy, boyish quiff, Jennifer shows off her true natural beauty with barely-there make up. Got a tablet? The People Shaping the Global Fashion Industry.

In an announcement that surprised many in the industry, Belgian designer Raf Simons announced he was stepping down as creative director of Christian Dior in October 2015. 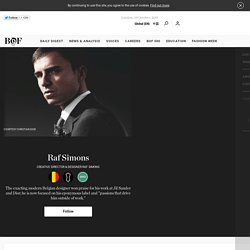 In a statement, the designer identifed "passions outside of work," as his motivation for leaving, describing his descision as "based entirely and equally on my desire to focus on other interests in my life. " LVMH chairman and chief executive Bernard Arnault and Dior chief executive Sidney Toledano thanked the designer for his "exceptional contribution to the House," in the same statement. 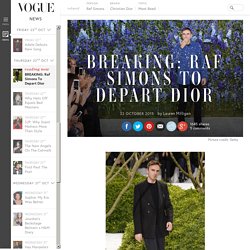 The move, which had been rumoured in fashion circles for several weeks, is said to be "for personal reasons". Confirmed in a statement by Sidney Toledano, Dior's CEO, the news comes just over three years into the Belgian designer's tenure. Raf Simons steps down as Christian Dior creative director. Nicolas Cochin. By URW++ 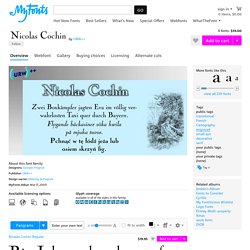 Board shorts are the new midis Skirt wearers beware – it’s all about shorts next season. 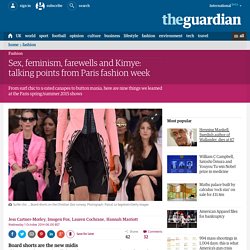 Moving on from culottes in Milan, Raf Simons at Dior – traditionally the home of ladylike style – has decreed that the board short is what you’ll be wearing come spring. But don’t think that sanctions carrying a surfboard and sporting a ratty pair of Vans. Simons made the board short posh by pairing it with ornate frock coats and embroidered booties. Think Kelly Slater crossed with Sofia Coppola’s Marie Antoinette and you’re almost there. Rejoice, mathletes! It’s hip to be square next season. Was there too much Wang in Balenciaga? To recap: Alexander Wang is the 30-year-old in charge of Balenciaga and JW Anderson is the 30-year-old in charge of Loewe.

We said some fond farewells Sorry Kim: the person whose spirit permeated this Paris fashion week was Gaby Aghion, the founder of Chloé, who died on Saturday, aged 93. Paris ditched zips for buttons Koumpounophobics, look away now. Rihanna wore the most INSANE coat to the Dior show and looked so incredible. Decoding Rihanna’s Dior campaign. Last night, Rihanna’s long-awaited Dior campaign dropped in full with a film by Steven Klein. 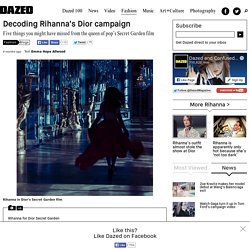 Read on for the five things you need to know about it, and head here to find out what the campaign means for fashion. “Style is almost an extension of my music,” said cover star Rihanna in AnOther’s Spring/Summer 2015 issue, so it’s no surprise such a big fashion step for the singer would include one of her songs. We’ve had “Four Five Seconds”, “Bitch Better Have My Money” and “American Oxygen”; now the campaign features a new song titled “A Night”, which samples the 2011 Florence + The Machine track “Only If For A Night”. Produced by Midas (and making a change from the previous Depeche Mode Secret Garden soundtracks) it’s the first track on her upcoming album R8 (so named because it’s her eighth studio effort). The film shows Rihanna walking the grounds of the palace at night, twirling through the Hall of Mirrors and shimmying beneath crystal chandeliers. Rihanna's new Dior ad makes her first ever black campaign star.

Dior confirmed in March that the 27-year-old popstar had been chosen to front the latest installment of the fashion label's Secret Garden campaignRihanna was spotted filming and shooting for the brand at the Palace of Versailles in Paris just days before Dior confirmed her new role By Charlie Lankston and Valerie Siebert For Dailymail.com Published: 00:24 GMT, 14 May 2015 | Updated: 15:53 GMT, 14 May 2015. 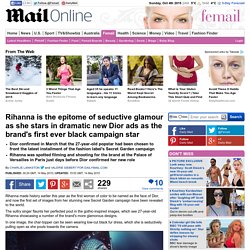 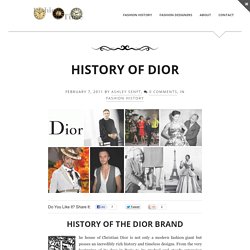 Share It: he house of Christian Dior is not only a modern fashion giant but posses an incredibly rich history and timeless designs. From the very beginning of its days in Paris to its gradual and steady expansion globally, this label has never stopped whisking people away with its innovative approach to fashion and magical collections. From Christian Dior himself, Yves Saint Laurent and now John Galliano, this label has never lacked genius. When people hear the name Dior role off the bright red lips of a somebody, they automatically think luxury, haute couture, and desire. Dior’s Competitors. Vintage Fashion Guild : Fashion Timeline : 1950 To 1960.

Dior’s 1947 New Look had symbolized a new hope and by the 1950s both the hope and the style were fully embraced. 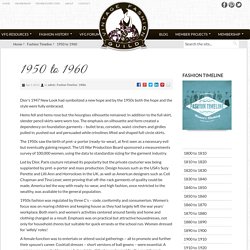 Hems fell and hems rose but the hourglass silhouette remained. In addition to the full skirt, slender pencil skirts were worn too. The emphasis on silhouette and form created a dependency on foundation garments – bullet bras, corselets, waist-cinchers and girdles pulled in, pushed out and persuaded while crinolines lifted and shaped full-circle skirts. The 1950s saw the birth of pret-a-porter (ready-to-wear), at first seen as a necessary evil but eventually gaining respect. The US War Production Board sponsored a measurements survey of 100,000 women, using the data to standardize sizing for the garment industry. Business Ethics Case Analyses: Christian Dior: Designer Drunkenly Declares "I... Fashion Backward. The year is 1947. 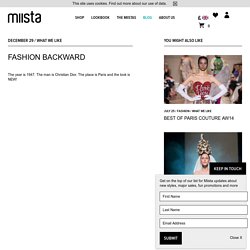 The man is Christian Dior. The place is Paris and the look is NEW! By present day standards Dior’s “New Look” is overwhelmingly modest and traditional. It is therefore difficult to truly grasp the controversy this silhouette caused. Christian Dior introduced the first collection of his eponymous line for the Spring/Summer season of 1947. Overall the collection was characterized by full, mid-calf to floor length skirts, small structured waist lines, a large bust and a gentle sloping shoulder. Naturally, you are probably wondering what all the fuss was about. #Emptyspaces just moments before the first guests enter the venue. #PFW #Diorshow.

Behind the scene Charlize Theron for J'adore by Peter Lindbergh #makejadoreyours. How women wear lipstick for power, sex appeal and youth. Rihanna oozes sex appeal as the face of new dior campaign as the brand’s firs... Rihanna Dior Secret Garden Long Version 2015. Dior Gets Stormy for Its Fall 2015 Ad Campaign. After all of the fanfare surrounding Dior's most recent campaign — that being Rihanna's cinematic Secret Garden IV series shot by Steven Klein at Versailles — the French label went back to its quaint, seaside roots for its fall 2015 ads. Models Julia Nobis, Mica Arganaraz and Natalie Westling are captured by Willy Vanderperre on the cliffs of Granville, Normandy, where Christian Dior himself was born in 1905. Against grey-blue skies and rocky cliffs, Raf Simons's fall designs take center stage. The animal print-inspired Diorama bags, skin-tight patent leather boots, bold mirrored sunglasses, ladylike jeweled collars, and dyed fur dresses add an undeniable brightness to an otherwise bleak landscape.

Could Simons help to turn Granville into the next trendy destination for travel-obsessed fashion folks? We doubt it, but these ads will likely leave them wanting his clothes. Click through to see the full campaign. Advertisement — Continue reading below. Dior Spring/Summer 2015 Advertising Campaign. Johnny Depp Is the New Face of Dior – See His Ad Campaign!