This is in line with the fashion line’s desire to target younger consumers, said Melisa Goldie, chief marketing officer of Calvin Klein Inc. “The launch of CK2 represents an extension of our overall brand strategy to reach a younger consumer base through modern, authentic storytelling,” she said. “Given its relevant cultural messaging and youthful spirit, CK2 aligns well with this evolving approach to consumer engagement.” “CK2 is a new gender-free fragrance that celebrates the endless possibilities of modern connections between two people,” said Camillo Pane, executive vice president, category development, for Coty Inc., which holds the Calvin Klein fragrance and color cosmetics licenses. The juice, produced by International Flavors and Fragrances, is an urban woody fresh blend. 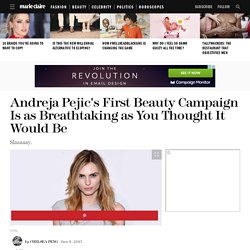 Advertisement - Continue Reading Below The beauty brand unveiled the images Wednesday in a video also starring actress and fashion blogger Jamie Chung. How Angelica Ross and TransTech Address the Unique Needs of Transgender People of Color. HRC Welcomes TransTech, Business That Connects Transgender People with. TransTech Offers Employment Solutions for Aspiring Transgender Coders. Angelica Ross — the dynamic entrepreneur who recently founded Chicago-based nonprofit TransTech — has personally seen the best and worst of what a transgender person can face on the job market. 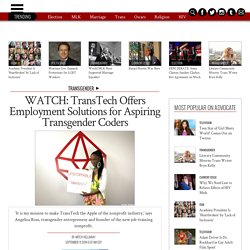 That's why she started TransTech, which will offer a training academy and apprenticeships for aspiring trans web developers and graphic designers this Fall. "TransTech emerged from my story, [which] is the same story for so many trans women of color," Ross tells The Advocate. "When I began my transition, I was fired from my job, estranged from my family, and introduced to sex work and the adult industry. " Chin Menswear seeks the feminine in the male. The menswear that Chin makes doesn’t look at typical gender distinctions. 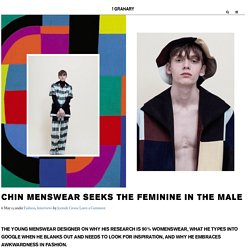 In fact, about 90% of his research is based on the feminine; he got a womenswear degree in Taiwan before studying at Central Saint Martins, and one of his earliest fashion memories is that of his mother twirling in the room when she had just bought new clothes. His general aesthetic often takes cues from the the 90s — the era in which he grew and obsessed over Gwen Stefani — yet his last collection took more reference from diversity and globalisation in the 80s. Calvin Klein launches CK2. It’s not often that you find a fragrance that defines a generation. 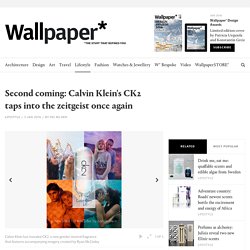 In the case of CK One, the androgynous Calvin Klein fragrance that launched in 1994, everything from its supernormal flask-like bottle to its zesty, clean scent came to symbolise the grungy, carefree attitude of the 1990s. Fast forward to over a decade later, and Calvin Klein’s follow-up effort CK2 hopes to tap into the zeitgeist once again. Lingerie Brand Neon Moon Latest To Add Transgender Model. The lingerie brand Neon Moon, who recently gained media attention for fighting online trolls for body shaming women, has become the latest fashion label to add a transgender model to their ranks. 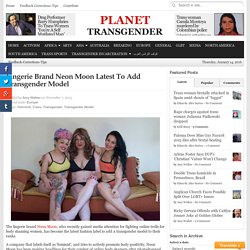 A company that labels itself as ‘feminist’, and tries to actively promote body positivity, Neon Moon has been making headlines for their combat of online body shamers after photoshopped pictures of their models surfaced. Priding itself on this message of not altering their images and believing that all women should be proud of their bodies, Neon Moon quickly worked to get the altered images removed from the web and named and shamed those responsible. Their new campaign ‘I Am Neon Moon’ aims to ‘fight against transphobia, body shaming and negative perceptions of the female body’. When asked how they would be combating transphobia their founder and CEO, Hayat Rachi, replied ‘By being inclusive and representing transgender women in a positive light within the lingerie industry. About Us - Neon Moon. “But before you cry ''WTF?! 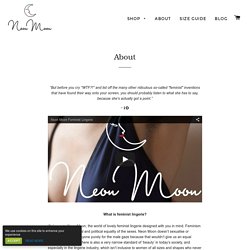 '' and list off the many other ridiculous so-called "feminist" inventions that have found their way onto your screen, you should probably listen to what she has to say, because she's actually got a point.” What is feminist lingerie? Welcome to Neon Moon, the world of lovely feminist lingerie designed with you in mind. Feminism is the economic, social and political equality of the sexes. Feminist Lingerie Is The Body-Positive Underwear We've Been Waiting For. Lingerie and feminism have never been easy bedfellows. 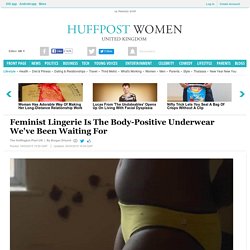 With half-naked women lying suggestively on beds or hanging off men in sharp suits, a typical lingerie advert is enough to make any right-thinking woman roll their eyes in disgust. But one woman is refusing to look the other way. Hayat Rachi hopes to revolutionise the industry with the world’s first ‘feminist lingerie’ - and no, it doesn’t involve burning your bra. Neon Moon empowers women through body positivity and the non-objectification of women. Selfridges’ Agender – too much concept, not enough access - WGSN/INSIDER. Elfridges’ much-anticipated, gender-neutral space Agender was unveiled in its London flagship last week but a quick visit over the weekend left us somewhat non-plussed. 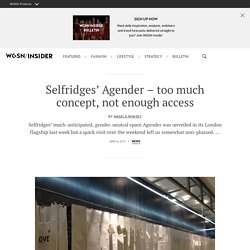 For a retail story that’s all about breaking open a new category and breaking down barriers the reality in store doesn’t fit the bill. The space is much more firmly at the concept end of the spectrum than the shoppable and even mildly accessible end. Bagged merchandise on the rails may have a visual impact but it makes the whole collection impenetrable, which is a shame, because when looking in the Oxford Street windows afterwards, there were plenty of items which caught mine (and my male companion’s) interest. 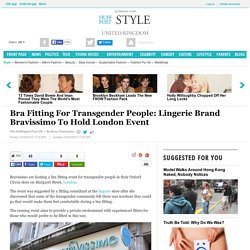 The event was suggested by a fitting consultant at the lingerie store after she discovered that some of the transgender community felt there was nowhere they could go that would make them feel comfortable during a bra fitting. The evening event aims to provide a private environment with experienced fitters for those who would prefer to be fitted in this way. A spokesperson from Bravissimo said: "We’re a fully inclusive brand at Bravissimo and want to give all our customers the confidence to say 'I’m being the me I want to be'.

"Our wonderful team at our flagship store in Oxford Circus have a loyal customer base and when we realised the demand to hold a more private and intimate fitting evening for our transgender and non-binary customers we were thrilled to be able to host such an event. Close. Bravissimo to hold bra fitting for trans people. The lingerie store is to hold a bra fitting event for trans and non-binary people. Trans people, who often face discrimination and hostility while clothes shopping, have been invited to a free bra fitting event at the shop in Margaret Street, London. The shop says it will be a “safe space”. Primark Lets Transgender Customers Use Whichever Fitting Room They Feel Most Comfortable In. Primark's staff training guide includes a section informing staff that transgender customers should be allowed to "use whichever fitting room they choose".

A page from an in-store guide, which a Primark spokesperson told HuffPost UK Style has been sent to all stores, informs staff that "customers should be comfortable when they try anything on", under the heading "One Size Fits All". A Primark spokesperson told HuffPost UK Style: “It is Primark policy to allow all transgender customers to use the fitting rooms of their choice in Primark stores.” Primark reminds its staff to treat transgender customers equally… In today’s “well, obviously” news, Primark has instructed its staff to allow its transgender customers to use whichever changing room they feel comfortable in. Miley Cyrus Launches the Happy Hippie Foundation to Help Homeless, LGBT Youth... On Tuesday, Miley Cyrus announced the official launch of Happy Hippie, a nonprofit organisation that is devoted to helping homeless youth, LGBT youth, and other vulnerable populations.

Miley says the major theme of the organisation is one that she emphasises on a daily basis through social media: be yourself. "The position I'm in, I feel like I've got a lot of power," she said in a phone interview with the Associated Press on Monday. "But so many kids don't feel that way. The Happy Hippie Foundation. Nearly 3 Months In, Here’s the Impact Miley Cyrus Is Having on LGBT and Homeless Youth. On May 5, Miley Cyrus' Happy Hippie foundation exploded into our lives with a burst of acoustic joy. Alongside Joan Jett, Cyrus sang the foundation to life with a cover of "Different," a song about being proud of one's differences in the face of antagonism. It would be difficult to find a song more representative of the foundation's mission to raise awareness and support for homeless and LGBT youth. Nearly three months later, we're starting to see the foundation's real impact on the communities it's intended to serve.

Cyrus has built a truly unique resource for young people struggling with identity issues. Nicola Formichetti, Hari Nef and Selfridges Take a Stance on Unisex Fashion. One style suits all as unisex fashion gets on the agender. The current wave of unisex fashion has been building for the past six months – from Saint Laurent, JW Anderson and Hermès’s spring/summer 2015 collections to Topshop and The Kooples on the high street. Faye Toogood's gender-neutral retail spaces in Selfridges. London department store Selfridges has opened concept retail spaces free from gender directives, created by designer Faye Toogood (+ slideshow). Uk.businessinsider. Inside Selfridges' radical, gender-neutral department store. Agender. Trans Folks Respond to 'Bathroom Bills' With #WeJustNeedtoPee Selfies. 'We just need to pee' transgender protest. Do you have to be biologically male to be allowed in the men's toilet, or biologically female for the ladies loos?