Social media turns ugly after zoo episode. The circumstances surrounding the shooting death of a rare male gorilla at Cincinnati’s zoo exploded over the holiday weekend into an international social media-driven firestorm. 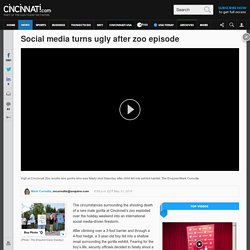 After climbing over a 3-foot barrier and through a 4-foot hedge, a 3-year-old boy fell into a shallow moat surrounding the gorilla exhibit. Fearing for the boy’s life, security officials decided to fatally shoot a gorilla, Harambe, who had engaged with the boy in the zoo habitat. By Monday afternoon, a day after the child had been treated and released from Cincinnati Children’s Hospital Medical Center, parent-shaming posts had risen to indirect death threats toward the boy’s mother on social media and moved Cincinnati police to act.

“Even though they’re not direct death threats, we’re going to reach out to the mother and let her know what’s going on, if she doesn’t know already,” said police spokesman Lt. Steve Saunders. Harambe the gorilla: the zoo killing that’s set the internet on fire, explained. Cincinnati gorilla Harambe: Psychologist points to viral aspect in some socia... CINCINNATI -- The reaction came swiftly from all sides: Blame the mother. 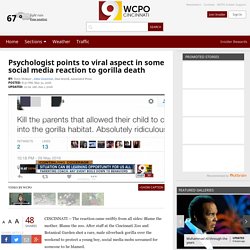 Blame the zoo. After staff at the Cincinnati Zoo and Botanical Garden shot a rare, male silverback gorilla over the weekend to protect a young boy, social media mobs screamed for someone to be blamed. By Tuesday afternoon, more than 135,000 people had signed a petition to create a law holding zoo visitors responsible for the well-being of endangered zoo animals. Reacting to tragic news is perfectly normal, clinical psychologist Dr. Erin Thase said, and it's been part of human nature for a very long time. "I think people's intention with social media is you post something with the intention that you want a reaction, right? BACKGROUND: Zoo defends decision to shoot gorilla Before Facebook and Twitter and even email, those conversations would happen in person.

WCPO is sharing video from Saturday's event at the zoo so readers and viewers can have an increasingly better understanding of the incident: Death of Harambe unleashes social media torrent. Reacting to tragic news, like that of the killing of Harambe at the Cincinnati Zoo, is perfectly normal, clinical psychologist Dr. 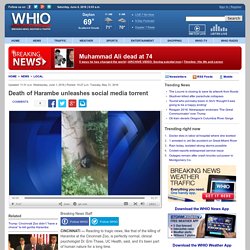 Erin Thase, UC Health, said, and it’s been part of human nature for a long time. What is new is that thanks to social media, those reactions are preserved and amplified. Saturday’s shooting of the rare male silverback gorilla by the zoo’s Dangerous Animal Response Team, to protect the 3-year-old boy who had fallen into the Gorilla World enclosure, has unleashed a torrent of comment. “I think people’s intention with social media is you post something with the intention that you want a reaction, right? If you didn’t want a reaction, then you wouldn’t post it on social media, so I think a lot of time people post with the intention of having some kind of response, even if it can be negative,” Thase, with UC Health, told our news partner WCPO-TV.

Before Facebook and Twitter and even email, those conversations would happen in person. Michelle Gregg: 5 Fast Facts You Need to Know. Michelle Gregg and Deonne Dickerson, the boy’s father. 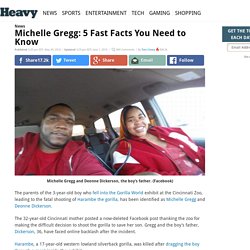 (Facebook) Our reaction to Harambe the gorilla - and the black boy who fell into his cag... The instant that a Cincinnati zoo keeper gunned down Harambe, a silver-backed gorilla, in order to save the life of a toddler who accidentally fell into his enclosure, public furore ensured. 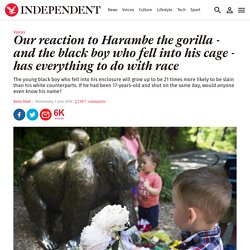 Tens of thousands railed against Cincinnati Zoo Director Thane Maynard for defending the killing of the gorilla. However, the fallout over the incident has taken a decidedly racist turn since the public discovered that the boy and his parents are black. The Daily Mail published a piece on the young boy’s parents that can only be described as dog-whistle racial stirring – up front is a large picture of the black couple, with long paragraphs and a headline detailing the father’s decade-old criminal convictions as well as emphasising that the couple have four children (Michelle Gregg is described as “mother-of-four” first and then, almost immediately afterwards, a woman “who has four children by father Deonne Dickerson”.) Loaded: 0% Progress: 0% Who are Michelle Gregg and Deonne Dickerson? Parents of boy who fell into gorilla enclosure pictured. They have faced criticism from around the world after their son fell into a gorilla enclosure resulting in the death of 17-year-old silverback Harambe . 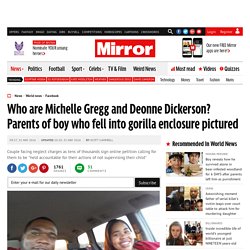 Zoo staff shot the endangered primate fearing the child’s life was at risk. But new footage that emerged last night appeared to show the “gentle giant” protecting the child rather than posing any threat. Couple Michelle Gregg, 32, and Deonne Dickerson, 37, who reportedly have four children together, are now facing neglect charges over the incident in Cincinnati, Ohio. ViralHog Read more: Astonishing new footage shows gorilla 'PROTECTING' boy and holding his hand before being shot dead Watch Next Click to play Loaded: 0% Progress: 0% The Live Event you are trying to watch is either unavailable or has not started Please refresh this page in your browser to reload this live event video The industrial worker was also congratulated by friends last January when he had his fourth child with Deonne. Facebook. Comment sections are poison: handle with care or remove them. It sits there like an ugly growth beneath articles, bloated and throbbing with vitriol. 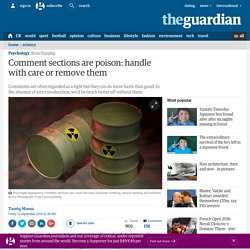 It groans as hatred expands its force, waiting for any point of dissent to break it – to unleash its full fury on targets who dare convey some measure of civility or dissent (if you want almost guaranteed hate, be a woman). Comment sections, to me, are the chronic pain centres of the internet, the part of the digital body we’re all forced to accept exists, but must manage by injecting policies and systems into. Some find great value in comment sections and one feels almost obliged to say “Not all comment sections”.

They are, like the internet itself, tools: we don’t discard wrenches because of a few accidents. Yet, if people start using wrenches to mostly beat each other with, maybe it’s time to radically rethink whether they should be allowed at all. They’re not going anywhere I’ve never really been a fan of comment sections and have often interrogated their necessity. Cincinnati Zoo: Justice for Harambe. The creator of this petition wishes to extend her thanks and appreciation for the support in the quest to seek justice for Harambe. 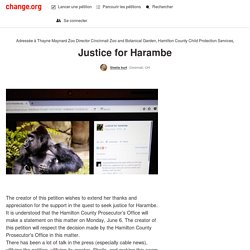 It is understood that the Hamilton County Prosecutor’s Office will make a statement on this matter on Monday, June 6. The creator of this petition will respect the decision made by the Hamilton County Prosecutor's Office in this matter. There has been a lot of talk in the press (especially cable news), vilifying the petition, vilifying its creator, Sheila, and making this seem like a race-baited witch-hunt for the mother and that the intent of the petition is to get kids removed from the home.

Nothing can be further from the truth. Ms. We understand no parent is perfect, kids are curious and can slip away, but we do get concerned when a child was at risk for serious injury and death in one of the safest settings around. Mom On Child Falling Into Gorilla Exhibit After Cincinnati Zoo — Message. The mom whose child fell into a gorilla exhibit at the Cincinnati Zoo on May 28 is finally speaking out. 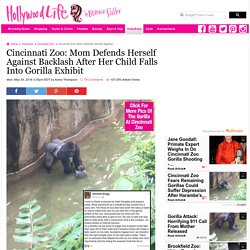 She stressed that ‘accidents happen,’ and she’s so thankful for everyone who helped rescue her child. Read her message now. Michelle Gregg, the mother of the 4-year-old who fell into a gorilla enclosure at the Cincinnati Zoo on May 28, is fighting back against her online critics. After people on social media blamed her for the terrible situation, the mom took to Facebook to clear the air. She said that people are being too “quick to judge” and revealed how her son is doing after the “scary” ordeal.

“I want to thank everyone for their thoughts and prayers today,” she wrote in a Facebook post, that was later deleted. The gorilla, named Harambe, was later shot and killed. “As a society we are quick to judge how a parent could take their eyes off of their child and if anyone knows me I keep a tight watch on my kids,” she continued. Cannot load M3U8: crossdomain access denied (2048) Social Media Before the Internet: The World Before Twitter, Facebook. Social media platforms have revolutionized the way we communicate. 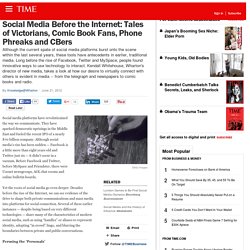 They have sparked democratic uprisings in the Middle East and fueled the recent IPO of a nearly $70 billion company. Although social media’s rise has been sudden — Facebook is a little more than eight years old and Twitter just six — it didn’t occur in a vacuum. Before Facebook and Twitter, before MySpace and Friendster, there were Usenet newsgroups, AOL chat rooms and online bulletin boards. Company Info. How Facebook Was Founded.