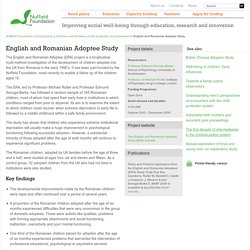 It has been part-funded by the Nuffield Foundation, most recently to enable a follow up of the children aged 15. The ERA, led by Professor Michael Rutter and Professor Edmund Sonuga-Barke, has followed a random sample of 165 Romanian children, most of whom had spent their early lives in institutions in which conditions ranged from poor to abysmal. Its aim is to examine the extent to which children could recover when extreme deprivation in early life is followed by a middle childhood within a safe family environment. The study has shown that children who experience extreme institutional deprivation will usually make a huge improvement in psychological functioning following successful adoption. The evidence suggests that wider, more flexible criteria are possible for successful adoption within the UK. 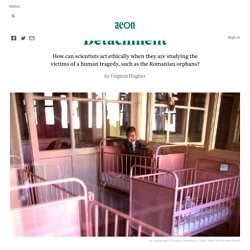 It was a short ride through a residential neighbourhood of Bucharest, littered with posters of politicians’ heads for the upcoming elections. Nervous, I mentally recited the two rules the American professor had given me the night before: no picking up the kids, and no crying in front of them. We pulled up to a dingy pink building, lined on all sides by tall wire fencing, and parked at the curb. After passing through the checkpoint of a stoic security guard, we stepped into an empty hallway. It was cleaner than I had expected; old plaster walls and chipped steps, yes, but no obvious filth. Over the next hour or so, the manager of the place — a short and affable 24-year-old guy — gave us a tour. And flock they did. We saw the kids’ bedrooms. After about half an hour of holding the sweet boy’s hand, I suddenly, urgently, needed to let go. St Catherine’s was once the largest orphanage in Bucharest. What became of Romania's neglected orphans? BBC secret filming of the conditions in Romanian institutions A BBC investigation has uncovered appalling conditions and abuse in adult institutions in Romania, 20 years after the fall of Nicolai Ceausescu exposed conditions in the country's orphanages. 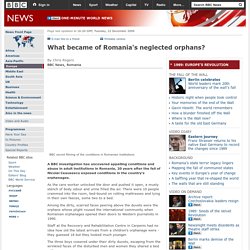 As the care worker unlocked the door and pushed it open, a musty stench of body odour and urine filled the air. There were 10 people crammed into the room, bed-bound on rotting mattresses and lying in their own faeces, some two to a bed. Among the dirty, scarred faces peering above the duvets were the orphans whose plight roused the international community when Romanian orphanages opened their doors to Western journalists in 1990. Staff at the Recovery and Rehabilitation Centre in Carpenis had no idea how old the latest arrivals from a children's orphanage were - they guessed 18 but they looked much younger. One of the boys was desperately thin. Another new arrival had deep cuts to her head. Notorious institutions Low standards Well-cared for.

Romanian Orphans Investigation. AIMS: One of the consequences of psychological research into the effects of institutionalisation - see Separation, Maternal Deprivation and Evaluating Bowlby - was to greatly reduce the extent to which children were placed in such care. 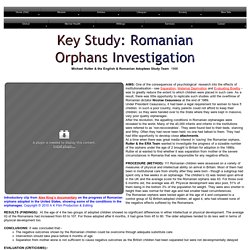 As a result, there was little opportunity to replicate such studies until the overthrow of Romanian dictator Nicolae Ceaucescu at the end of 1989. Under President Ceaucescu, it had been a legal requirement for women to have 5 children. In such a poor country, many parents could not afford to keep their children; so they were handed over to the State where they were kept in massive, very poor quality orphanages. The Determinist Myth of the Early Years. Tuesday 16 July 2013 Whether based on attachment theory or neurobabble, the claim that human beings are set in stone by the age of three is groundless. 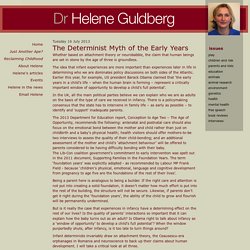 The idea that infant experiences are more important than experiences later in life in determining who we are dominates policy discussions on both sides of the Atlantic. Earlier this year, for example, US president Barack Obama claimed that ‘the early years in a child’s life – when the human brain is forming – represent a critically important window of opportunity to develop a child’s full potential’. The Organization of Attachment Relationships: Maturation, Culture, and Context - Patricia McKinsey Crittenden, Angelika Hartl Claussen. Member Area. Scribd - Read books, audiobooks, and more. Problems Reported by Parents of Romanian Orphans Adopted to British Columbia. Lianne Fisher Elinor W. 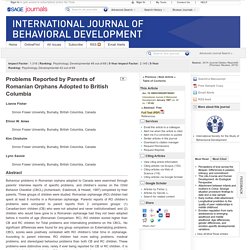 Early Neglect Alters Kids' Brains. Until the 1990s, the orphanages of Romania were notorious for their harsh, overcrowded conditions. 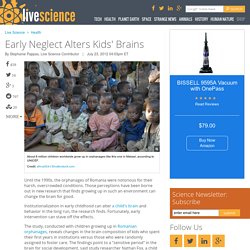 Those perceptions have been borne out in new research that finds growing up in such an environment can change the brain for good.