A 1:60-Scale Boeing 777 Built Entirely from Paper Manilla Folders by Luca Iaconi-Stewart. Inspired by high school architecture class where he was assigned to create simple paper models using cut paper manilla folders, San Francisco-based designer Luca Iaconi-Stewart went home to begin construction on an extremely ambitious project: a 1:60 scale reproduction of a Boeing 777 using some of the techniques he learned in class. 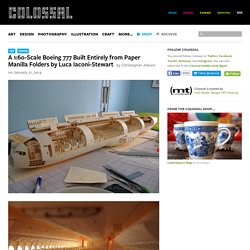 That was in 2008, when Iaconi-Stewart was just a junior in high school. Unbelievably, the project continues five years later as he works on and off to perfect every aspect of the plane. Relying on detailed schematics of an Air India 777-300ER he found online, he recreates the digital drawings in Adobe Illustrator and then prints them directly onto the paper manilla folders. But everything has to be perfect. So perfect, that Iaconi-Stewart says he’s actually built two airplanes, the one you see here and the numerous failed attempts including three tails, two entire sets of wings, and multiple experiments to ensure everything is just so. Building - Page 1 of 11. Model Gallery. Architecture. Free Papercrafts, Paper Models, Paper Toys and Origami Download. 3d paper models and crafts. โมเดลกระดาษ papermodel www.Modelgradas.com. Gamedemo : 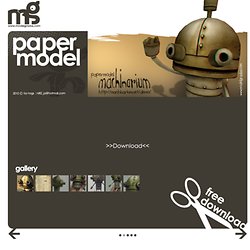 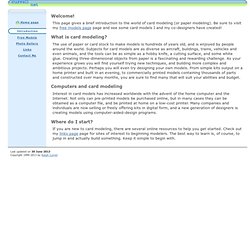 This page gives a brief introduction to the world of card modeling (or paper modeling). Be sure to visit my free models page page and see some card models I and my co-designers have created! What is card modeling? The use of paper or card stock to make models is hundreds of years old, and is enjoyed by people around the world. Subjects for card models are as diverse as aircraft, buildings, trains, vehicles and even animals, and the tools can be as simple as a hobby knife, a cutting surface, and some white glue. Computers and card modeling Interest in card models has increased worldwide with the advent of the home computer and the Internet. 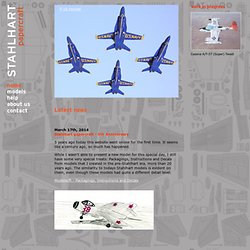 It seems like a century ago, so much has happened. While I wasn't able to present a new model for this special day, I still have some very special treats: Packagings, Instructions and Decals from models that I created in the pre-Stahlhart era, more than 20 years ago. The similarity to todays Stahlhart models is evident on them, even though these models had quite a different detail level. Modelsoft - Packagings, Instructions and Decals February 2nd, 2013 Dear Friends, I haven't had the time or the heart to work on modeling projects for more than 4 months and I may not have for quite a while longer. Paragon Cardmodels. Erick's Models. Ecardmodels.com. Home. Modele kartonowe. Paper Modelers. Order Wurlington Press Postcards. Paper Toys - Paper Cut-Out Models - Free at PaperToys.com. Racepaper.de - germany - bremen. Modelik.pl. Modele kartonowe. Art of Modelling - scale modeling magazine.