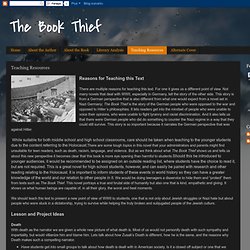 For one it gives us a different point of view. Not many novels that deal with WWII, especially in Germany, tell the story of the other side. This story is from a German perspective that is also different from what one would expect from a novel set in Nazi Germany; The Book Thief is the story of the German people who were opposed to the war and opposed to Hitler’s philosophies. It lets readers get into the mindset of people who were unable to voice their opinions, who were unable to fight tyranny and racial discrimination. While suitable for both middle school and high school classrooms, care should be taken when teaching to the younger students due to the content referring to the Holocaust.There are some tough topics in this novel that your administrators and parents might find unsuitable for teen readers, such as death, racism, language, and violence. Lesson and Project Ideas Death Words Story Telling Style.

THE BOOK THIEF: Lesson Ideas. ***One of the major challenges that educators will face in teaching this novel is its length; 550 pages is a sizable amount for a student to read and process. 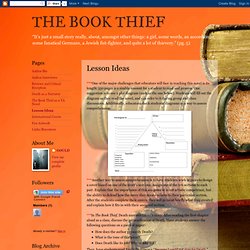 One suggestion is to use a plot diagram (such as the one below). Students will fill out the diagram as they read the novel, and can refer to it during group and class discussions. Additionally, educators check students’ diagrams as a way to assess comprehension. ***Another way to assess comprehension is to have students work in pairs to design a cover based on one of the story’s sections. Assign one of the ten sections to each pair. ***In The Book Thief, Death narrates Liesel’s story. How does the author personify Death? Then, have students read Emily Dickinson’s “Because I could not stop for Death,” and answer the same questions as before.

***After reading about Max’s first experiences in hiding (p.138-141), take time as a class to read and discuss Jeannine Burk’s story of being a hidden child during WWII. Book Thief. Below you will find resources to accompany the teaching of Markus Zusak's The Book Thief. 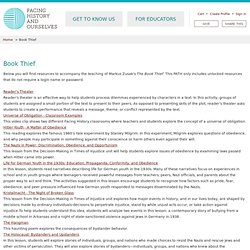 This PATH only includes unlocked resources that do not require a login name or password. Reader’s theater is an effective way to help students process dilemmas experienced by characters in a text. In this activity, groups of students are assigned a small portion of the text to present to their peers. As opposed to presenting skits of the plot, reader’s theater asks students to create a performance that reveals a message, theme, or conflict represented by the text. In this lesson, students read narratives describing life for German youth in the 1930s. In this lesson, students will explore stories of individuals, groups, and nations who made choices to resist the Nazis and rescue Jews and other victims of persecution. Identity charts are a graphic tool that helps students consider the many factors that shape who we are as individuals and as communities. Resources for Teachers - The Book Thief: A Pathfinder. 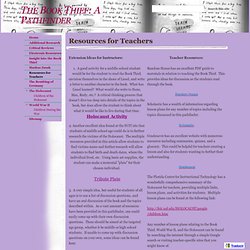 A good activity for a middle-school student would be for the student to read the Book Thief, envision themselves in the shoes of Liesel, and write a letter to another character in the book. What has Liesel learned? What would she write to Hans, Max, Rudy, etc.? Book Summary. The majority of the novel takes place in the fictional town of Molching, Germany, near Munich, between 1939 and 1943. 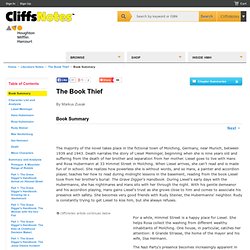 Death narrates the story of Liesel Meminger, beginning when she is nine years old and suffering from the death of her brother and separation from her mother. Liesel goes to live with Hans and Rosa Hubermann at 33 Himmel Street in Molching. When Liesel arrives, she can't read and is made fun of in school. She realizes how powerless she is without words, and so Hans, a painter and accordion player, teaches her how to read during midnight lessons in the basement, reading from the book Liesel took from her brother's burial: The Grave Digger's Handbook.

During Liesel's early days with the Hubermanns, she has nightmares and Hans sits with her through the night. For a while, Himmel Street is a happy place for Liesel. The Nazi Party's presence becomes increasingly apparent in Molching. Max also understands the power of words.