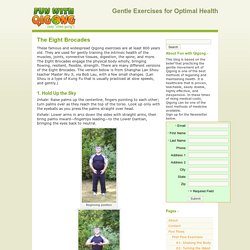 They are used for gently training the intrinsic health of the muscles, joints, connective tissues, digestion, the spine, and more. The Eight Brocades engage the physical body wholly, bringing flowing, resilient, flexible, strength. There are many different versions of the Eight Brocades. The version below is from Shanghai Lan Shou teacher Master Wu Ji, via Bob Lau, with a few small changes. (Lan Shou is a type of Kung Fu that is usually practiced at slow speeds, and gently.) 1. Inhale: Raise palms up the centerline, fingers pointing to each other; turn palms over as they reach the top of the torso.

Exhale: Lower arms in arcs down the sides with straight arms, then bring palms inward—fingertips leading—to the Lower Dantian, bringing the eyes back to neutral. Beginning position Raise the Palms Stretch up with bent joints Continue to stretch as you arc down Go right into the next rep More Keys to the First Movement 2. Fists. Qigong-v1.pdf. The Eight Brocades. The Eight Brocades are a set of qigong exercises that originated in China and are practiced throughout the world. 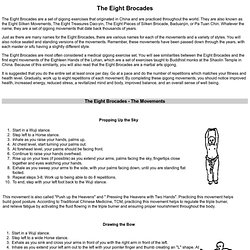 They are also known as the Eight Silken Movements, The Eight Treasures Dao-yin, The Eight Pieces of Silken Brocade, Baduanjin, or Pa Tuan Chin. Whatever the name, they are a set of qigong movements that date back thousands of years. Just as there are many names for the Eight Brocades, there are various names for each of the movements and a variety of styles. You will also notice seated and standing versions of the movements. Remember, these movements have been passed down through the years, with each master or sifu having a slightly different style. The Eight Brocades are most often considered a medical qigong exercise set.

It is suggested that you do the entire set at least once per day. The Eight Brocades - The Movements If you'd like to read more about Qigong and the Eight Brocades, check out the following sites: 8 Brocades chi gong complete free information how the 8 brocade silk exercises help to heal through meditation movements. The Walking Tiger Tai Chi - EIGHT_BROCADES.pdf. The Eight-brocade Exercise (Ba Duan Jin) Eight Section Brocade Chi Kung, Ba Duan Jin Qigong, Eight Treasures Exercise Routine from China. Research by Michael P. 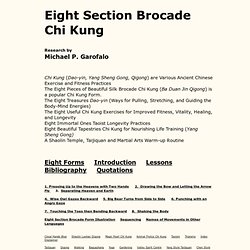 Garofalo The use of calisthenics, stretching, and breathing exercises to maintain good health, fight disease, and enhance the quality of life is of great antiquity. This type of physical activity has a long documented history in both India and China. Artwork, medical manuals, folklore, treatises, scriptures and reports on the subject go back over 2,500 years.