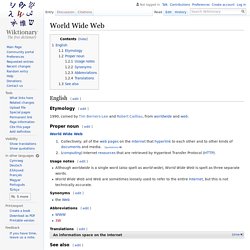 Proper noun[edit] The birth of the web. Tim Berners-Lee, a British scientist at CERN, invented the World Wide Web (WWW) in 1989. 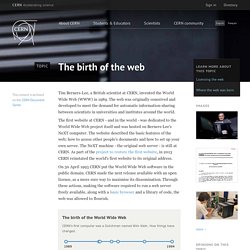 The web was originally conceived and developed to meet the demand for automatic information-sharing between scientists in universities and institutes around the world. The first website at CERN - and in the world - was dedicated to the World Wide Web project itself and was hosted on Berners-Lee's NeXT computer. World Wide Web. The World Wide Web (abbreviated as WWW or W3,[3] commonly known as the web) is a system of interlinked hypertext documents accessed via the Internet. 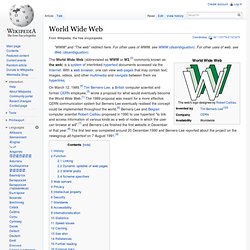 With a web browser, one can view web pages that may contain text, images, videos, and other multimedia and navigate between them via hyperlinks. History[edit] In the May 1970 issue of Popular Science magazine, Arthur C. Clarke predicted that satellites would someday "bring the accumulated knowledge of the world to your fingertips" using a console that would combine the functionality of the photocopier, telephone, television and a small computer, allowing data transfer and video conferencing around the globe.[10] On March 12, 1989, Tim Berners-Lee wrote a proposal that referenced ENQUIRE, a database and software project he had built in 1980, and described a more elaborate information management system.[11]