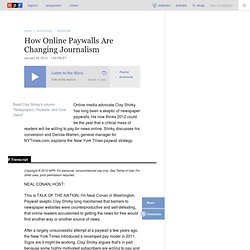 For personal, noncommercial use only. See Terms of Use. For other uses, prior permission required. This is TALK OF THE NATION. I'm Neal Conan in Washington. After a largely unsuccessful attempt at a paywall a few years ago, the New York Times introduced a revamped pay model in 2011. And it's not just national newspapers like the Times and the Wall Street Journal.

Future of Journalism. The Conversation: In-depth analysis, research, news and ideas from leading academics and researchers. European Journal of Communication: 0267-3231, 1460-3705. How ProPublica is using Facebook group for patient safety investigation. Credit: Image by jfcherry on Flickr. 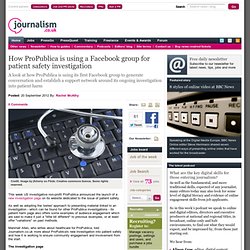 Creative commons licence. Some rights reserved. This week US investigative non-profit ProPublica announced the launch of a new investigation page on its website dedicated to the issue of patient safety. As well as adopting the 'series' approach to presenting material linked to an investigation - which can be found for other ProPublica investigations - its patient harm page also offers some examples of audience engagement which are said to make it just a "little bit different" to previous examples, or at least offer "variations" on past methods. Marshall Allen, who writes about healthcare for ProPublica, told Journalism.co.uk more about ProPublica's new investigation into patient safety and how it is working to ensure community engagement and involvement from the start. Mark Austin introduces a new ITV News website. Media culture shifts: theory v reality. This weekend, my reading was dominated by corporate media culture issues: how to transition from the legacy media culture to the more agile and chaotic digital world? 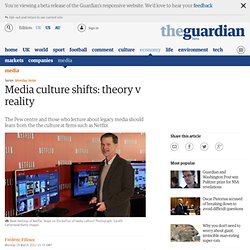 I've been reading up on this topic – and sometimes conferencing about it – for years. But, to my surprise, over time, I've been feeling lectured on those very issues. Sometimes irritatingly so. The last sermon was delivered early March by the Pew Research Center's Project for Excellence in Journalism. How social networking is changing journalism. The morning of the Oxford Social Media Convention focused on the impact of social media. 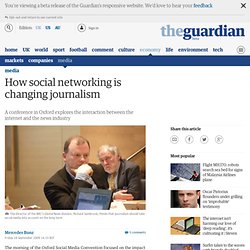 Especially interesting were the statements on the panel 'Breaking news: the changing relationships between blogs and mainstream media'. Richard Sambrook, the director of the BBC Global News Division, said that the impact of social media was overestimated in the short term and underestimated in long term. Mainstream media are adopting social media especially with blogging and twitter, he admited, but nobody discusses the effects on the long term. What Facebook and Twitter Mean for News. By Amy Mitchell & Tom Rosenstiel of PEJ, and Leah Christian of the Pew Research Center Perhaps no topic in technology attracted more attention in 2011 than the rise of social media and its potential impact on news. 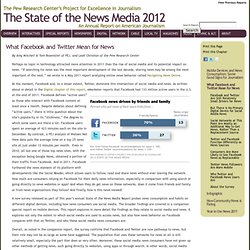 “If searching for news was the most important development of the last decade, sharing news may be among the most important of the next,” we wrote in a May 2011 report analyzing online news behavior called Navigating News Online. At the moment, Facebook and, to a lesser extent, Twitter, dominate this intersection of social media and news. As written about in detail in the Digital chapter of this report, eMarketer reports that Facebook had 133 million active users in the U.S. at the end of 2011. Journalists. How The Independent uses Facebook “Likes” to push specialized content to readers. Robert Fisk, the Middle East correspondent for The Independent in the United Kingdom, is surging in popularity on Facebook, with more than 13,000 “Likes” since mid-January. 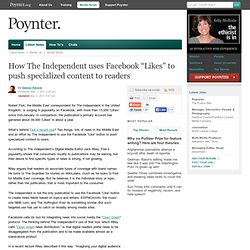 In comparison, the publication’s primary account has garnered about 39,000 “Likes” in about a year. What’s behind Fisk’s recent rise? Two things: lots of news in the Middle East and an effort by The Independent to use the Facebook “Like” button to push specialized content to users. According to The Independent’s Digital Media Editor Jack Riley, Fisk’s popularity shows that consumers’ loyalty to publications may be waning, but their desire to find specific types of news is strong, if not growing. Riley argues that readers do associate types of coverage with brand names. Why Journalists should be using Facebook more.

Twitter has long been regarded as a default news channel for breaking stories, featuring them well ahead of traditional news outlets. 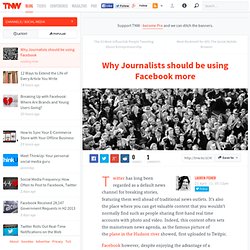 It’s also the place where you can get valuable content that you wouldn’t normally find such as people sharing first-hand real time accounts with photo and video. Indeed, this content often sets the mainstream news agenda, as the famous picture of the plane in the Hudson river showed, first uploaded to Twitpic. How to: create a Facebook page as a journalist. Journalist programme manager Vadim Lavusik's Facebook page "Facebook is a rolodex of more than 750 million potential sources," journalist programme manager at Facebook Vadim Lavrusik told Journalism.co.uk. This guide explains why journalists should consider having a professional presence on Facebook by creating a fan page to connect with sources and readers, make contacts, build a brand as a journalist and promote articles.

There are also examples of successful journalist fan pages and tips on using your page. Goed nieuws: gebruik social media levert echt iets op! Facebook blijft maar groeien in Nederland. Facebook: population growth and tattoos more popular than hard news. Facebook: the BBC's 'The world at seven billion' interactive was the most-shared article of 2011 From a drunk Swedish elk to the death of Amy Winehouse, Facebook has revealed the most popular UK news stories of 2011. The Facebook list shows that users of the social network are as diverse as on Twitter – and that the weird and wonderful often outdoes news on natural disasters. The BBC's smart interactive to mark the 7 billionth person on earth was the most shared news story on Facebook this year, according to the social network.

The Death of the Editor and the Rise of the Circulation Manager. By Maria Popova A 1923 critique of everything that’s wrong with media today. 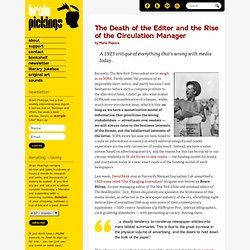 Recently, The New York Times asked me to weigh in on SOPA. Partly under the pressure of an impossibly short notice, and partly because I was hesitant to reduce such a complex problem to the slim word limit, I didn’t go into what makes SOPA just one manifestation of a deeper, wider, much more worrisome issue, which is this: so long as we have a monetization model of information that prioritizes the wrong stakeholders — advertisers over readers — we will always cater to the business interests of the former, not the intellectual interests of the latter. SOPA exists because we have failed to create an information economy in which editorial integrity and reader experience are the only currencies of media merit. 9 Real-Life Rules For Creating Shareable Content. If social media is a cocktail party, then all the great gossip, funny stories and interesting tidbits you hear at that party are the kinds of content we’re all striving to create. 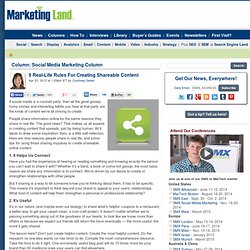 People share information online for the same reasons they share in real life. The good news? That makes us all experts in creating content that spreads, just by being human. All it takes to draw some inspiration, then, is a little self-reflection. Facebook heeft meer dan 900 miljoen actieve gebruikers. Gefeliciteerd, je bent een totale uitzondering. 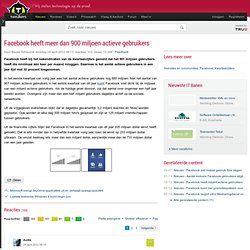 The catch is that virtually anything worthwhile in life takes time and effort, and blogging is not an exception to this statement. Pressthink. We the Media; Grassroots Journalism By the People, For the People. Facebook Terminologie - Yes2web. Geplaatst op 09-12-2011 in Advies.

Does Your Newsroom Need a Facebook Ad Budget? 5 things journalists need to know about new Facebook subscription feature. Facebook's new "subscribe" button seen as most beneficial for journalists. Facebook reveals list of most-shared articles of 2011. Social-Media-Optimisation_mixdown.mp3 (audio/mpeg-object) How to: best post news on Twitter and Facebook. SMO is the new SEO, according to the US-based Online News Association which held a conference session on that theme. But while "Social Media Optimisation may be as important as Search Engine Optimisation for content distribution ... far different rules apply," the ONA said.

Beyond the jargon and acronyms SMO is about understanding the best time and frequency to post to platforms such as Facebook and Twitter. This guide includes 10 lessons from three experts in social media optimisation, who have all carried out research, analysing tweets and Facebook page updates. 1. Work out the best time to tweet using free tools Leo Widrich, co-founder of Buffer, a platform that allows you to queue up tweets and post them at optimal times during the day, wrote an article for Mashable on five free tools to use to work out when to tweet. Widrich told Journalism.co.uk how the five tools – WhenToTweet, Tweriod, TweetWhen, TweetReports and TweetStats – work. 2. 3. 4. Facebook: Our Comments Plugin Increases Publisher Traffic up to 45% [STATS] Just over a month ago, Facebook released its much-feared commenting solution for third parties. In that time, Facebook Comments have made their way to more than 50,000 websites, including the Los Angeles Times, Funny Or Die and Vevo.

Today, Facebook announced a set of improved features for publishers and users, alongside some stats that seem to say that the commenting system actually increases, rather than decreases, discussion and Facebook referrals. The biggest change for users will be the ability to login using Hotmail, which boasts more than 360 million active users. Facebook v Disqus: The pros and cons for using Facebook comments.