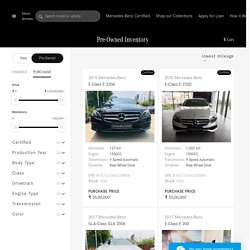 Price does not include government fees and taxes, any finance charges, any dealer document processing charge, any electronic filing charge, and any emission testing charge. Click vehicle to view detailed pricing and financing options. Description and illustration of the vehicle including optional functions and equipment may not be specific to a vehicle since specification of a vehicle may change from time to time. Optional features, functions and equipment etc. may not be present in the Standard or Variant Product or Special Edition Product. Accessories, colours and fitments shown in the image may not be a part of standard specification. Certified All All Certified (2 cars) Not Certified (3 cars) Production Year All 2020 (1 car) 2019 (1 car) 2017 (3 cars) Body Type All Sedan (4 cars) SUV (1 car) Class All E-Class (4 cars) GLA-Class (1 car) Drivetrain All Front-Wheel Drive (1 car) Rear-Wheel Drive (4 cars) Engine Type All Color All.

Mercedes Benz Test Drive in Delhi NCR - Silver Arrows. I would like to receive information and advice about the products and services offered by Mercedes-Benz India Pvt. 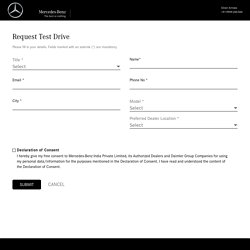 Ltd (MB India), Daimler Financial Services India Pvt. Ltd (DFS) [MB India and DFSI are collectively referred to as the Companies] and the Authorized Dealers of the MB India. For this purpose, I hereby give my free consent to the Companies and Authorized Dealers of MB India, for the below personal data/information (Personal Information): my name, contact details, Driving License or other identification document, and any other personal information which may be provided by me; data about my vehicle (e.g. vehicle configuration, mileage, data from the digital service booklet) and information about products purchased and services used (e.g. lease agreements, vehicle configurations stored) which may be collected, processed and used by the Companies and Authorized Dealers of MB India and shared amongst these companies. 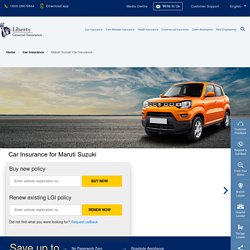 With Liberty General Insurance, all you need to do is visit our website and buy the car insurance policy for Maruti Suzuki car online. The process is simple, paper-free, and can be completed with just a few clicks. Maruti Suzuki is one of India’s most well-recognized automobile manufacturers. Partly owned by Japanese car and motorcycle manufacturer Suzuki Motor Corporation, the brand has a plethora of cars on offer in the Indian market. Popular models from the company include Ciaz, Ertiga, Wagon R, Alto K10 and Alto 800, Swift, Celerio, Swift Dzire, Baleno and Baleno RS, Omni, Baleno, Eeco, Ignis, S-Cross and Vitara Brezza. The company was formed in 1982 after a license and joint venture agreement was signed between Indian Maruti Udyog Ltd. and Japanese Suzuki. Currently, the company is gearing up for the launch of its latest model, the S-Presso. 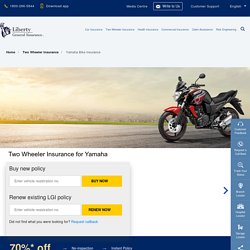 Don’t forget to get your two wheeler insured. With Liberty General Insurance (LGI), you can buy a comprehensive two wheeler insurance policy. Japanese motorcycle manufacturer Yamaha is one of the four big brands in the Japanese Domestic Market (JDM), the other three being Honda, Suzuki and Kawasaki. Apart from manufacturing motorcycles, Yamaha also builds marine products such as boats and outboard motors. Vespa Insurance: Buy/Renew Two Wheeler Insurance for Vespa Bikes.

Ensure your priceless Vespa is protected in a seamless, secure, and cost-effective manner. 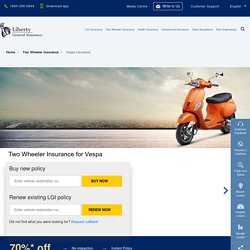 With Liberty General Insurance, you can buy a two wheeler insurance policy of your preference online in a few clicks. Vespa is one of Piaggio Group’s flagship scooter brands. The group was founded in the year 1884 by twenty-year-old Rinaldo Piaggio. Piaggio and C. UM Lohia Insurance: Buy/Renew Two Wheeler Insurance for Um lohia Bikes. Two Wheeler Insurance in Visakhapatnam: Buy/Renew Bike Insurance Policy in Visakhapatnam. Visakhapatnam, with its premier educational institutions, IT special economic zones, connectivity and cosmopolitan culture, was the ninth richest Indian city with a GDP of Rs2.79 lakh crore, going by 2017 figures. 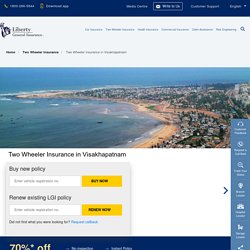 The city is in the throes of further development with the state government mulling to develop it as Andhra Pradesh's de facto seat of power or executive capital. Going by 2017 figures, a Union Ministry report has placed Andhra Pradesh in the top-ten bracket with highest road accidents. And Visakhapatnam, with a population of over 50 lakh in the metro area alone, reported the highest number of road crash fatalities and injuries in the state. The report further states that the largest contributors to road mishaps were two wheelers such as scooters and motorcycles. Two Wheeler Insurance in Surat: Buy/Renew Bike Insurance Policy in Surat. The Silk City of India, Surat is one of the most dynamic cities the country can flaunt with one of the fastest growth rates, thanks to immigration from various part of Gujarat and other states of India. 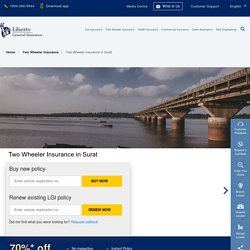 According to a report prepared by Oxford Economics, which is engaged in global forecasting and quantitative analysis, this Diamond City, called so for being the diamond processing and trading hub in Gujarat would be the world's fastest-growing city in the 2019-35 period. The city is also known for its cleanliness and greenery and claims a varied heritage of the past. In its earlier years, Surat was a glorious port with ships of more than 84 countries anchored in its harbour at any time.

Even today, Surat continues the same tradition with people from across the country flocking to this industrial hub for business and jobs. On the flip side, since Surat attracts mass movement of heavy vehicles all over the year, it also attracts fatal accidents on the road. Two Wheeler Insurance in Pune: Buy/Renew Bike Insurance Policy in Pune. One of the fastest-growing cities in India with a large educated workforce and educational institutions, Pune is home to many multinational companies. 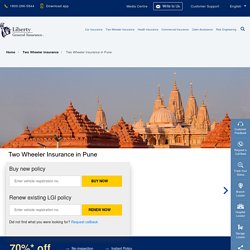 Though the city has an extensive network of public buses, autorickshaws, taxis and taxi aggregator companies, Puneites have a special liking for two wheelers. No wonder around 25 lakh two wheelers ply the Pune roads and the number is just growing. In fact, the Young Pune or the young at heart are riding the two wheeler boom in Pune like never before. Apart from the chaotic, narrow and congested roads, there could be other valid reasons too for Pune to prefer two wheeler as its favoured mode of transportation. Mainly the end-point connectivity, affordable travel, fuel efficiency and ease of parking. According to the latest road accident report put out by the Ministry of Road Transport and Highways, there were as many as 13,261 fatality cases in Maharashtra in 2018. Two Wheeler Insurance in Nagpur: Buy/Renew Bike Insurance Policy in Nagpur. A whopping 12.86 lakh plus vehicles for a population of around 27 lakh. 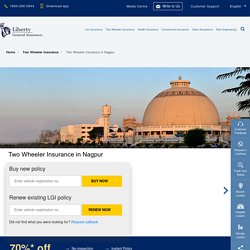 That is Nagpur's vehicle density in a nutshell. The winter capital of Maharashtra, Nagpur’s every second person is a vehicle owner. And these are 2017 figures. The two-wheeler count then was over 10.75 lakh, with motor bikes making a distant second with around 1.09 lakh users. According to RTO records, almost 35 vehicles are added to the city every day. Apart from its congested roads, there are many other reasons for Nagpur to vroom. Two Wheeler Insurance in Lucknow: Buy/Renew Bike Insurance Policy in Lucknow. Home to extraordinary monuments and architecture that blend the ancient, colonial and oriental, Lucknow, the capital city of Uttar Pradesh, is bustling with life. 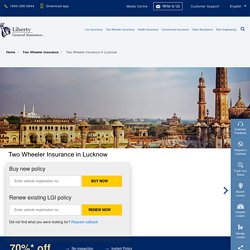 With a reputation for rich cuisine and gracious living, the growing population of more than 30 lakh Lucknowites criss-cross the City of Nawabs mainly on two wheelers. The reasons for more and more Lucknowites mounting the two wheeler instead of opting for public transport, be it a cab or an autorickshaw, could vary. But some reasons common to Lucknow could be heavy traffic, parking woes, end-point connectivity, fuel efficiency and cheaper travel. No wonder, the city’s name takes a beating when it comes to accidents involving two wheelers. Following the traffic rules and guidelines, taking safety precautions measures, and balancing the twin principles of speed and safety could help one keep himself and his vehicle safe.

You can also find a list of Liberty General Insurance-partnered garages at our garage locator. Two Wheeler Insurance in Kolkata: Buy/Renew Bike Insurance Policy in Kolkata. Known to all as the City of Joy, Kolkata is India’s second-largest city, and considered by many as India’s intellectual and cultural capital. A city that has had a massive role in India’s freedom struggle, Kolkata is also the home of India’s Renaissance movement. It has long been known for its literary, artistic and revolutionary heritage. As the former capital of India, not only Kolkata, but West Bengal was the birthplace of modern Indian literary, artistic and scholastic thought. With the good, also comes the bad. Kolkata is a metropolis with a very limited road space and one of the highest vehicle density roads. Two wheelers serve a big chunk of Kolkata population. Two Wheeler Insurance in Kanpur: Buy/Renew Bike Insurance Policy in Kanpur.

The biggest city in India's largest state of Uttar Pradesh, Kanpur is also the 10th most populous city in India. A major industrial and commercial hub on the banks of the River Ganga, the city is home to several educational institutions, including an Indian Institute of Technology (IIT-Kanpur). Not just the population, Kanpur also has high private vehicle density, a big chunk of which is two wheelers.

Though two wheeler count in the country has gone up by a whopping 150% in less than a decade, in Kanpur, there were occasions when showrooms of popular brands ran out of vehicles and failing to meet readily the increased demand. Two Wheeler Insurance in Jaipur: Buy/Renew Bike Insurance Policy in Jaipur. Capital of Rajasthan and one of the largest cities in India, Jaipur is also home to all the modern amenities. Also called the Pink City, for its famed hospitality culture, Jaipur boasts of some of the most exotic resorts and star hotels in the world.

The city has an international airport and is also well connected by rail and road. On the flip side, the ever-increasing population and rapid urbanisation have also contributed to vehicular density and aggravated traffic congestion. The city has roughly six times more vehicular density in comparison to that of the entire state of Rajasthan. Improper traffic management too is taking its toll. So, before you hit the streets on your favourite two wheeler wearing that headgear, do realise that there is much more to be done to secure you from any untoward incident for the simple reason that you don't have Ravan-like 10 heads to look at all 10 directions while on the road. Two Wheeler Insurance in Hyderabad: Buy/Renew Bike Insurance Policy in Hyderabad. Two wheelers serve at least half the Hyderabad population. Public transport modes, especially buses, which were once the most preferred mode of transport in Hyderabad, have now given way to a mushrooming number of two wheelers.

It could be a bike, a scooter, moped or a scooter, this bustling city is full of them. With over 36 lakh scooters and motorcycles now on roads, the city has recorded an almost 118% increase in two wheeler numbers over 2008, when it was just around 16 lakh two wheelers. Apart from the insufficient and inefficient public transport system, other factors too play a role in the city’s growing bike density, namely congested roads, cheaper travel, fuel efficiency, ease of parking, and end-point connectivity. Being Hyderabad’s most favoured mode of commute, the trend is fraught with other risks as well. However, to the relief of city’s bike lovers, Liberty General Insurance (LGI) has marked its presence big time in the region. Two Wheeler Insurance in Delhi: Buy/Renew Bike Insurance Policy in Delhi. Going by March 2018 figures, Delhi is home to a whopping 70 lakh two wheelers. The figure doesn't give the real picture on the actual number of vehicles plying the city roads, thanks to the presence of two wheelers registered in the national capital region (NCR) areas.