Harvesting Energy From Your Floor Using a Triboelectric Nanogenerator Technology. Xudong Wang, an associate professor of materials science and engineering at UW-Madison, his graduate student Chunhua Yao, and their collaborators published details of the advance Sept. 24 in the journal Nano Energy. 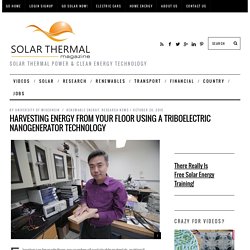 Severed Battery Heals Like Skin. The next generation of wearable tech won't be just another smartwatch or smart sports bra. 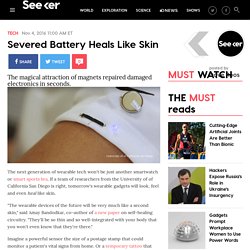 If a team of researchers from the University of of California San Diego is right, tomorrow's wearable gadgets will look, feel and even heal like skin. Will This “Neural Lace” Brain Implant Help Us Compete with AI? Solar-powered self-driving cars, reusable space ships, Hyperloop transportation, a mission to colonize Mars: Elon Musk is hell-bent on turning these once-far-fetched fantasies into reality. 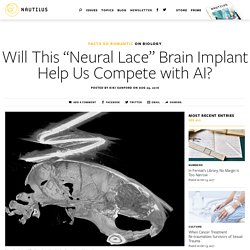 But none of these technologies has made him as leery as artificial intelligence. Earlier this summer at Code Conference 2016, Musk stated publicly that given the current rate of A.I. advancement, humans could ultimately expect to be left behind—cognitively, intellectually—“by a lot.”

Glaxo and Verily Join Forces to Treat Disease By Hacking Your Nervous System. GlaxoSmithKline and Google’s life sciences spin-off, Verily, are jointly funding a new venture that will investigate how tiny bioelectronic devices can be used to modify nerve signals and treat chronic diseases. 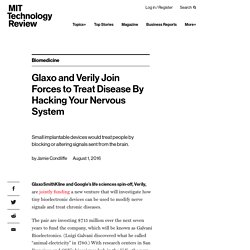 The pair are investing $715 million over the next seven years to fund the company, which will be known as Galvani Bioelectronics. (Luigi Galvani discovered what he called “animal electricity” in 1780.) With research centers in San Francisco and GSK’s bioscience hub in the U.K., the new company will investigate how to create small, implantable electronic systems that can be used to correct irregular nerve impulses. The devices—sometimes referred to as electroceuticals—place a small sheath around a bundle of nerves. Urine fuel cell gets more power with new design. A more efficient but also cheaper type of microbial fuel cell that can use urine for fuel to generate electricity has been developed by British researchers. 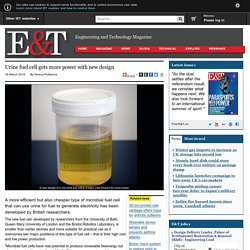 The new fuel cell, developed by researchers from the University of Bath, Queen Mary University of London and the Bristol Robotics Laboratory, is smaller than earlier devices and more suitable for practical use as it overcomes two major problems of this type of fuel cell – that is their high cost and low power production. "Microbial fuel cells have real potential to produce renewable bioenergy out of waste matter like urine," said Mirella Di Lorenzo, a member of the University of Bath team.

The Weird Business Behind a Trendy “Anti-Aging” Pill. A renowned MIT aging scientist as cofounder. 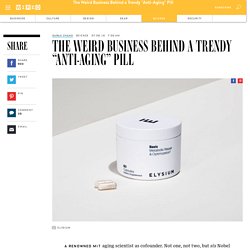 Not one, not two, but six Nobel prize laureates as scientific advisors. ‘Undead’ genes come alive days after life ends. Does death really mean the end of our existence? 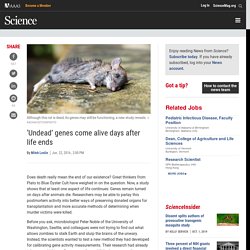 Great thinkers from Plato to Blue Öyster Cult have weighed in on the question. Now, a study shows that that at least one aspect of life continues: Genes remain turned on days after animals die. These Scientists May Have Found a Way to Stop Nuclear Meltdowns. Big brains are racing to save our power-hungry planet. 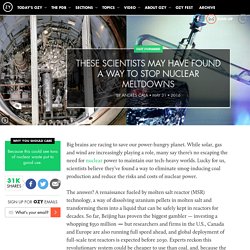 While solar, gas and wind are increasingly playing a role, many say there’s no escaping the need for nuclear power to maintain our tech-heavy worlds. Lucky for us, scientists believe they’ve found a way to eliminate smog-inducing coal production and reduce the risks and costs of nuclear power. The answer? A renaissance fueled by molten salt reactor (MSR) technology, a way of dissolving uranium pellets in molten salt and transforming them into a liquid that can be safely kept in reactors for decades. So far, Beijing has proven the biggest gambler — investing a whopping $350 million — but researchers and firms in the U.S., Canada and Europe are also running full speed ahead, and global deployment of full-scale test reactors is expected before 2030. A Big Leap for an Artificial Leaf. A new system for making liquid fuel from sunlight, water, and air is a promising step for solar fuels. 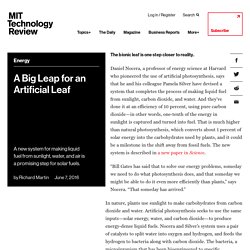 The bionic leaf is one step closer to reality. Daniel Nocera, a professor of energy science at Harvard who pioneered the use of artificial photosynthesis, says that he and his colleague Pamela Silver have devised a system that completes the process of making liquid fuel from sunlight, carbon dioxide, and water.

And they’ve done it at an efficiency of 10 percent, using pure carbon dioxide—in other words, one-tenth of the energy in sunlight is captured and turned into fuel. That is much higher than natural photosynthesis, which converts about 1 percent of solar energy into the carbohydrates used by plants, and it could be a milestone in the shift away from fossil fuels. The new system is described in a new paper in Science. In nature, plants use sunlight to make carbohydrates from carbon dioxide and water.

First Experimental Demonstration of a Quantum Enigma Machine. Quantum physicists have long thought it possible to send a perfectly secure message using a key that is shorter than the message itself. 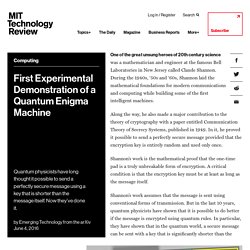 Now they’ve done it. This Gross Sound Your Knee Makes Could Be a Sign of Health. The cracking, snapping sounds of your knee joint might make you shudder, but could also be indicative of the joint's health. In the case of an injured knee, a device that helps a doctor listen to the noises it makes upon movement may help determine how much healing has occurred or whether the patient needs more therapy. That's why researchers at Georgia Institute of Technology are currently developing a knee band equipped with microphones and vibration sensors to measure the sounds of the joint. The device's piezoelectric film mics don't measure sounds in the air, but the vibrations in the skin. A joint's gross cracking noise, called "crepitus," could indicate instant progress. "I actually feel like there's some real information in [the noises] that can be exploited for the purposes of helping people with rehab," said Omer Inan, assistant professor of electrical and computer engineering, former discus thrower, and knee injury patient, who pitched the knee band idea.

Future - The ancient Peruvian mystery solved from space. In one of the most arid regions in the world a series of carefully constructed, spiralling holes form lines across the landscape. Known as puquios, their origin has been a puzzle – one that could only be solved from space. The holes are from the Nasca region of Peru – an area famous for the Nasca lines, several enormous geometric images carved into the landscape; immaculate archaeological evidence of ceremonial burials; and the rapid decline of this once flourishing society.

Scientists Use DNA to Store and Retrieve Images. The University of Washington and Microsoft researchers have collaborated on an incredible project that will change data storage as we know it. The team has developed a way of storing data on DNA, which promises to dramatically reduce the storage size needed to save our files, images, and more. The team claims the technology would take a data center as large as a Walmart Supercenter and shrink it down to the size of the sugar cube you drop into your morning coffee. The research behind this stunning technology was presented this month at the ACM International Conference on Architectural Support for Programming Languages and Operating Systems.

The Long-Awaited Promise of a Programmable Quantum Computer. Physicists have unveiled a programmable five-qubit processing module that can be connected together to form a powerful quantum computer. The quest to build a powerful quantum computer is one of the great challenges of 21st century physics. And although the hurdles are significant, physicists are chasing them down, one by one. They’ve gradually learned how to control quantum particles with the precision necessary to run quantum algorithms on a small scale with just a few qubits. The big challenge now is scale—combining these techniques in a way that can handle large numbers of qubits and perform powerful quantum calculations. Halo Neuroscience Headphones Play for Your Brain Not Your Ears. What if a one-hour workout could get you 1.5 hours of gains?

It sounds outrageous, but Daniel Chao and Brett Wingeier –founders of Halo Neuroscience— think they can make it happen with a clever new approach. Rather than focusing on your muscles, they’ve developed a headset that boosts your workout by stimulating your brain. The Halo Sport headphones, as they’re called, are designed to prime your brain for exercise. The process is called “neuropriming,” and it involves using gentle electrical pulses to encourage the brain to form new pathways — thereby making training more effective. Sending targeted signals to the brain boosts motor unit recruitment, meaning it helps the brain activate more muscle fibers. Professor says Hemp Waste is "Better" than Graphene. Stem Cells Used To Grow Eyeballs. You’ll soon be able to see the future with eyes grown in petri dishes. New 'Superman' crystals can store data for billions of years - Feb. 17, 2016. Researchers in the U.K. have developed a way of storing digital data inside tiny structures contained in glass.

This House Costs Just $20,000—But It’s Nicer Than Yours. Paralyzed man walks unassisted using only brain control. Scientists create mind-melding device, then play '20 Questions' Kick, jump and play your way to renewable energy with these empowering products. Soccer, or football as it's known in most countries and cultures, is the unequivocally most popular sport in the world. Globally, around 270 million people play the game.

Time Cloaks Are Almost Ready for the Real-World. Band-Aid Stops Bleeding Instantly. E.coli has been turned into a biological hard drive - Geek. Scientists Turned Carbon Dioxide into Oxygen by Zapping It with a Laser. One Company's Plan to Build a Space Elevator to the Moon. Cancer tx. How Close Are We to Star Trek Propulsion? - The Crux. DARPA Is Developing Tiny Implants That Trigger Self-Healing. Molecular Electronics Take a Nanostep Closer to Reality.

Someone Invented Magic And It Is Freaking Us Out. GrowCube promises to grow food with ease indoors (hands-on) Man stitches computer into his arm, becomes DIY cyborg. Scientists create bionic body using artificial limbs and organs. Craig Venter Will Teleport Your DNA. 3D printing techniques will be used to construct buildings, here and in outer space - Network World. 5 Crazy New Man-Made Materials That Will Shape the Future. Scientists Use 'Wired Microbes' To Generate Electricity From Sewage. From AAAS. Stanford scientists build first carbon nanotube computer. Some schemes to boost brainpower are too clever by half.