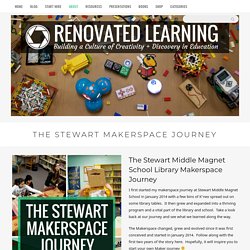 It then grew and expanded into a thriving program and a vital part of the library and school. Take a look back at our journey and see what we learned along the way. The Makerspace changed, grew and evolved since it was first conceived and started in January 2014. Follow along with the first two years of the story here. (Note: I left Stewart in May 2017, but the makerspace there continues to grow.

Quick Background on Stewart Our school was originally Blake High School, a segregated high school that opened in the 1950s. Our Makerspace Journey. Makerspaces as classrooms: schools and hardware shops partner. Klint Kanopka still remembers the time when technology’s purpose in school could be boiled down to defeating your classmates on the Oregon Trail. 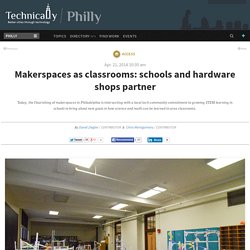 “And even shop class used to carry a negative stigma, and it was never really taken seriously,” Kanopka said. Today, the flourishing of makerspaces in Philadelphia is meeting a local tech community commitment to growing STEM learning in schools to bring about new goals . Earlier this year, the makerspace at the Academy at Palumbo was just a storage room. Makerspaces as classrooms: schools and hardware shops partner. Educational Makerspaces. Part 3 of Making an Educational Makerspace Laura Fleming, R. 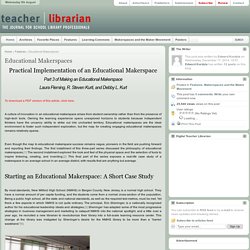 Steven Kurti, and Debby L. Kurt To download a PDF version of this article, click here. A culture of innovation in an educational makerspace arises from student ownership rather than from the presence of high-tech tools. Educational Makerspaces. How to Turn Any Classroom Into a Makerspace. There is a certain magic found in rolling up your sleeves and tackling a project head on, an undeniable sense of empowerment that results from solving problems and manifesting big ideas. 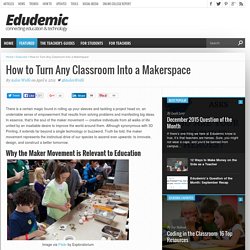 In essence, that’s the soul of the maker movement — creative individuals from all walks of life united by an insatiable desire to improve the world around them. Although synonymous with 3D Printing, it extends far beyond a single technology or buzzword. Truth be told, the maker movement represents the instinctual drive of our species to ascend ever upwards: to innovate, design, and construct a better tomorrow. How to Turn Any Classroom Into a Makerspace. Inexpensive making in the classroom. It seems like everywhere you go, someone is talking about the maker movement, making or people who are makers. 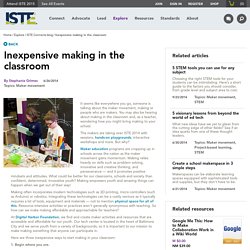 You may also be hearing about making in the classroom and, as a teacher, wondering how you might bring making to your school. The makers are taking over ISTE 2014 with sessions, hands-on playgrounds, interactive workshops and more. But why? Maker education programs are cropping up in schools across the nation as the maker movement gains momentum. Making relies heavily on skills such as problem solving, innovative and creative thinking, and perseverance — and it promotes positive mindsets and attitudes.

Making often incorporates modern technologies such as 3D printing, micro controllers (such as Arduino) or robotics. Inexpensive making in the classroom. How the Maker Movement Is Moving into Classrooms. The Maker movement is a unique combination of artistry, circuitry, and old-fashioned craftsmanship. 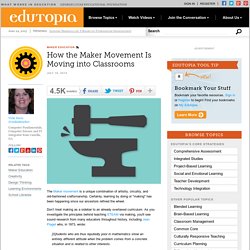 Certainly, learning by doing or "making" has been happening since our ancestors refined the wheel. Don’t treat making as a sidebar to an already overtaxed curriculum. As you investigate the principles behind teaching STEAM via making, you'll see sound research from many educators throughout history, including Jean Piaget who, in 1973, wrote: [S]tudents who are thus reputedly poor in mathematics show an entirely different attitude when the problem comes from a concrete situation and is related to other interests. In 1972, Seymour Papert predicted what many complain is the state of today's apps and programs for modern students: [T]he same old teaching becomes incredibly more expensive and biased toward its dumbest parts, namely the kind of rote learning in which measurable results can be obtained by treating the children like pigeons in a Skinner box. Maker classrooms are active classrooms. 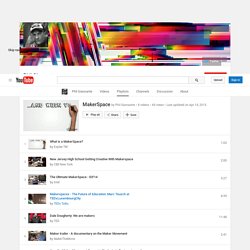 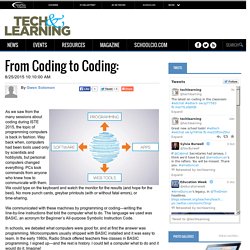 Way back when, computers had been tools used only by scientists and hobbyists, but personal computers changed everything. PCs took commands from anyone who knew how to communicate with them. We could type on the keyboard and watch the monitor for the results (and hope for the best). No more punch cards, greybar printouts (with or without fatal errors), or time-sharing. We communicated with these machines by programming or coding—writing the line-by-line instructions that told the computer what to do. Design an App! A Digital Technologies Project for 4/5/6Australian Curriculum Lessons. In this ICT activity, students create their own app. 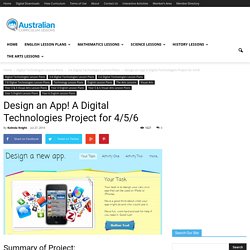 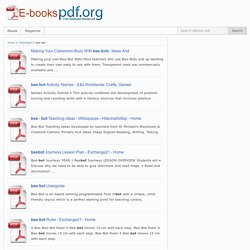 Bee-Bot Ruler A Bee-bot moves 15 cm with each step. Bee-Bot Ruler A Bee-bot moves 15 cm with each step. Welcome To The bee-bot Treasure Island Page 2 of 4 The Bee-Bot Treasure Island Game The games is based around the photocopiable symbols attached to the back of these notes. Bee Bot. MAKE STEAM: Giving Maker Education Some Context. As an experiential educator who has fully embraced technology as a means for allowing and facilitating learner voice, creativity, innovation, inventiveness, the Maker Education movement fits into my vision about what a good education entails. I have been blogging and presenting about Maker Education – see But recent discussions with other educators and administrators made me realize that the idea of maker education is often vague and seems unrealistic in terms of regular classroom instruction.

As such, in the future, I am going to associate and discuss Maker Education in the context S.T.E.A.M. – science, technology, engineering, arts (including language arts), math, hopefully, encouraging regular classroom teachers to integrate maker education projects into their classrooms. What follows are some resources and articles I compiled to provide educators as part of this discussion. Link to Thinglink that contains links to the following resources – Like this: Like Loading... MAKE STEAM: Giving Maker Education Some Context. Maker Ed's Resource Library. » Become a Sponsor Disclaimer: Maker Ed’s online Resource Library contains links to third-party organizations, companies, and commercial products. By including these resources, Maker Ed intends to highlight their potential value to the maker education community, rather than to provide an endorsement. The library is independently managed by Maker Ed staff, who adhere to a set of guidelines to ensure that all third-party resources are primarily informational, rather than promotional, in nature.

This resource curation process is free from the influence or control of any party outside of Maker Ed. Maker Ed's Resource Library. SCOE: Resources: Instruction: 21st Century Learning: Maker Education. We are pleased to announce that Sonoma County schools and districts interested in the Maker Education movement will now find new support and expertise for their efforts at SCOE. Local Maker Education expert Casey Shea has been hired as a SCOE teacher-on-loan. He will be available two days per week to provide hands-on workshops, on-site trainings, guidance for creating Maker spaces, and suggestions for simple Maker projects to get students started.

Shea currently teaches mathematics and Project Make at Analy High School in Sebastopol. He worked closely with Dale Dougherty and Maker Media in 2011-12 and helped create the first-ever Project Make class in the country. The Analy High program is now a national model for Maker Education. SCOE: Resources: Instruction: 21st Century Learning: Maker Education. What’s in a MakerSpace? By Sylvia Libow Martinez and Gary S. Stager A well-equipped modern MakerSpace features flexible, computer-controlled manufacturing equipment for creating, cutting, and forming plastics, metal, plaster, and other common materials, including: 3D printers that are capable of producing three-dimensional objects. What’s in a MakerSpace? Maker Space In Education Series… 10 Sites To Start Making In The Classroom. Welcome back and I sure hope you enjoyed the last article of 20 Reasons for Maker Space in Education. I hope you enjoy this post as I highlight 10 sites to possible help you to get Making in the classroom… even if in the smallest way!

I encourage you to send me information and resources you think help with this idea, as I am also Making time to learn. First, to ensure you do not miss one of these valuable posts or other resources covering PBL, Digital Curriculum, Web 2.0, STEM, 21st century learning, and technology integration please sign up for 21centuryedtech by email or RSS. As always, I invite you to follow me on twitter (@mjgormans). Maker Space In Education Series… 10 Sites To Start Making In The Classroom. Create a school makerspace in 3 simple steps.

How You Can Make a Makerspace Work for Your School. Classroom Resources. WNET is a proud partner of the Maker Party, an initiative hosted by Mozilla, the MacArthur Foundation, and the National Writing Project in which people around the world meet up, learn to make things, and share what they've made online. This collection is designed to support the Maker Party by providing a one-stop shop of STEM and digital making resources that focus on the problem, technology, or process behind object creation. Teachers can use the collection, which is categorized into design, how to (DIY), arts and crafts, robotics, and engineering subtopics, in conjunction with hands-on activities to further this initiative. Classroom Resources. The 4 Flavors of Makerspaces. Did you know that there are many different types of makerspaces, each with their own set of unique characteristics?