Mozilla anger over Dell Firefox fee. 6 March 2014Last updated at 07:33 ET Dell says it was charging for labour costs of installing a free web browser Mozilla is investigating reports that Dell is charging users with new computers to install the Firefox browser. 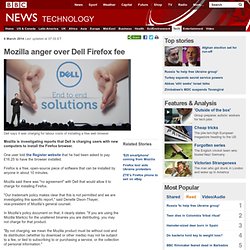 One user told the Register website that he had been asked to pay £16.25 to have the browser installed. Firefox is a free, open-source piece of software that can be installed by anyone in about 10 minutes. Mozilla said there was "no agreement" with Dell that would allow it to charge for installing Firefox. Cisco. Veille économique. Spécial. Sujets à polémique/méditer. Histoire. Veille Juridique.

À l'étranger. Veille technologique. The State of Open Hardware Entrepreneurship 2013. I’m just back from the Open Hardware Summit 2013 that happened last Friday September 6 at the MIT in Boston, MA. 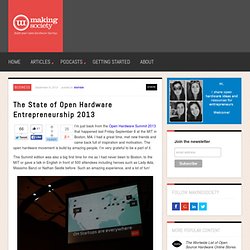 I had a great time, met new friends and came back full of inspiration and motivation. The open hardware movement is build by amazing people, I’m very grateful to be a part of it. This Summit edition was also a big first time for me as I had never been to Boston, to the MIT or gave a talk in English in front of 500 attendees including heroes such as Lady Ada, Massimo Banzi or Nathan Seidle before. Such an amazing experience, and a lot of fun! My presentation was about the State of Open Hardware Entrepreneurship in 2013.