Gender and Genetics. Genetic Components of Sex and Gender Humans are born with 46 chromosomes in 23 pairs. 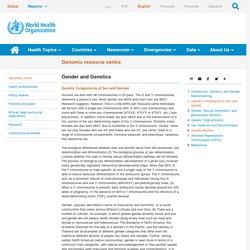 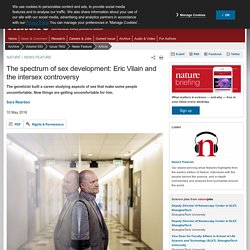 As a medical student in Paris in the 1980s, Eric Vilain found himself pondering the differences between men and women. What causes them to develop differently, and what happens when the process goes awry? At the time, he was encountering babies that defied simple classification as a boy or girl. Born with disorders of sex development (DSDs), many had intermediate genitalia — an overlarge clitoris, an undersized penis or features of both sexes.

Then, as now, the usual practice was to operate. Vilain has spent the better part of his career studying the ambiguities of sex. Vilain says that he doesn't seek out controversy, but his research seems to attract it. But what has brought Vilain the most grief of late has been his stance on sex-assignment surgery for infants with DSDs. Breaking binary In 1995, Vilain left France for a faculty job at UCLA. Sex redefined : Nature News & Comment. Illustration by Jonny Wan As a clinical geneticist, Paul James is accustomed to discussing some of the most delicate issues with his patients. 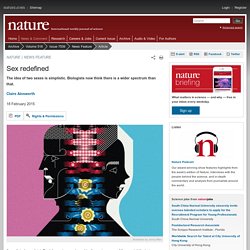 But in early 2010, he found himself having a particularly awkward conversation about sex. A 46-year-old pregnant woman had visited his clinic at the Royal Melbourne Hospital in Australia to hear the results of an amniocentesis test to screen her baby's chromosomes for abnormalities. The baby was fine — but follow-up tests had revealed something astonishing about the mother.

Her body was built of cells from two individuals, probably from twin embryos that had merged in her own mother's womb. Claire Ainsworth discusses the spectrum between male and female. Sex can be much more complicated than it at first seems. When genetics is taken into consideration, the boundary between the sexes becomes even blurrier. The New Science of Sex and Gender. Sex is supposed to be simple—at least at the molecular level.

The biological explanations that appear in textbooks amount to X + X = ♀ and X + Y = ♂. Venus or Mars, pink or blue. As science looks more closely, however, it becomes increasingly clear that a pair of chromosomes do not always suffice to distinguish girl/boy—either from the standpoint of sex (biological traits) or of gender (social identity). In the cultural realm, this shift in perspective has already received a wide embrace. “Nonbinary” definitions of gender—transfeminine, genderqueer, hijra—have entered the vernacular. To varying extents, many of us are biological hybrids on a male-female continuum. These findings have far-reaching implications beyond just updating the biology textbooks. In 1895 an article in Scientific American—“Woman and the Wheel”—raised the question of whether women should be allowed to ride bicycles for their physical health.

Change will only continue if the institutions that matter stay open to it. Skeletal Studies Show Sex, Like Gender, Exists Along a Spectrum. She wasn’t especially tall. 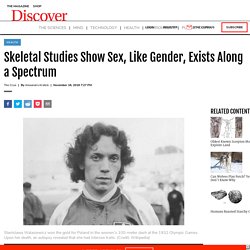 Her testosterone levels weren’t unusually high for a woman. She was externally entirely female. But in the mid-1980s, when her chromosome results came back as XY instead of the “normal” XX for a woman, the Spanish national team ousted hurdler María José Martínez-Patiño. She was ejected from the Olympic residence and deserted by her teammates, friends, and boyfriend. She lost her records and medals because of a genetic mutation that wasn’t proven to give her any competitive advantage. People like Martínez-Patiño have been ill-served by rules that draw a hard line between the sexes. An increasing recognition of this complexity by researchers and the public has affirmed that gender sits on a spectrum: People are more and more willing to acknowledge the reality of nonbinary and transgender identities, and to support those who courageously fight for their rights in everything from all-gender bathrooms to anti-gender-discrimination laws.