MathHammer Part 4. Rolling to Hit. This post is to answer a question about the MathHammer calculator. 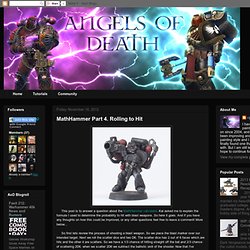 Kai asked me to explain the formula I used to determine the probability to hit with blast weapons. So here it goes. And if you have any thoughts on how this could be improved, or any other questions feel free to leave a comment! More below... So first lets review the process of shooting a blast weapon. Warlord. DIY - Reaver Titan Plans & Templates. Necromundicon. Battle of the Chumps Space Wolves Army. Battle of the Chumps (aka: Botch) is an annual Warhammer 40K tournament laid on by the FlameOn group and I intend to take my Space Wolves army, provided I can get a ticket. As an escalation tournament, the first two games are at 1000 points. You then need another 500 points to bolt onto your first 1000 points to make 1500 points and finally another 500 points to make a 2000 points list.

However, to spice things up a bit (to prevent cheesiness apparently), you can't have more than 1 of a single HQ type or more than 2 of any Fast Attack, Elite of Heavy Support choice. That goes for vehicles that can be taken as dedicated transports like Land Raiders and Battle Wagons too. Also, if you take a Special Character, you may not field any other characters in your army. Adeptus Arbites Miniatures. Arbitrator Razorback Conversion Getting an Arbites Champion to sit on a bike is not easy. Space Marine Armoury. Imperium of Man - Warhammer 40K Wiki - Space Marines, Chaos, planets, and more. New Items - Battle Foam. The cookie settings on this website are set to 'allow all cookies' to give you the very best experience. Please click Accept Cookies to continue to use the site. Phone: 01702 462017 Contact Categories.

How to build A Thunderhawk Gunship for around $25, Warning LOTS of Pictures, Free Template! - Forum - DakkaDakka. This post still under construction, I am just posting now so I don't lose my data if it crashes... So you want a Thunderhawk gunship but don't feel like shelling out the $700 to get one, let alone a couple thousand for a small fleet? Join the club! Over the last couple months I have been toying around with making the best looking thunderhawk I can for under $30.

It takes me about 10 minutes to construct one. Leave a comment if you want it a different colour to match your army’s colour scheme and I will email you a copy with freshly coloured paintwork. Save one of these images to your computer. Print it on thin card or thick paper, cut in out keeping the tabs intact. fold everything inwards.

NEWOBMIJ. Sharing the sky for Christmas. 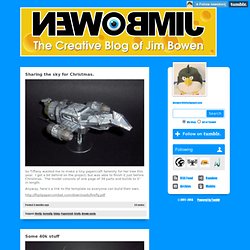 So Tiffany wanted me to make a tiny papercraft Serenity for her tree this year. I got a bit behind on the project, but was able to finish it just before Christmas. The model consists of one page of 39 parts and builds to 5” in length. Anyway, here’s a link to the template so everyone can build their own. Some 40k stuff. Conversions. PLASTIC GRENADE LAUNCHER! (See an example here).MATERIALS At least a foot length of 1/16" diameter plastic tubing (styrene). Some strip plastic, about 1/16" x 1/8" Plastic Ork Shoota with Drum feed (from the new plastic Ork sprues) Targeter scope from the new Space Marine plastic sprues (optional) Razor Saw or Jeweler's saw Liquid Polystyrene cement (solvent) Okay, first, saw the Ork Shoota in half, right down the center of the drum (as indicated by the grey line in the picture to the left).

Space Wolves. The Space Wolves are notorious throughout the rest of the Imperium for their ferocity in battle and their defiance of authority, including the dictates of the Codex Astartes that govern the organization and combat doctrines of other Space Marine chapters. 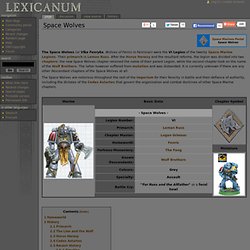 Homeworld Fenris is a death world that lies in the galactic north of Segmentum Solar. It is located relatively close to the Eye of Terror, yet indigenous life remains pure and untainted. It is also the planet that the mighty Space Wolves recruit their ranks and call home.[8j] 40k 6th edition game summary chart. Games Workshop Official PDF Database - Heresy-Online - Warhammer 40k and Fantasy Forums for painting tips, news & tactics!

Imperial Navy - Warhammer 40K Wiki - Space Marines, Chaos, planets, and more. "If the Adeptus Astartes are the Emperor's wrath, and the Imperial Guard His hammer, then His Holy Navy is His mighty shield. " — Cardinal Kregory Hestor The Imperial Navy is one of the armed forces of the Imperium of Man. 102 koloss. Space Wolves in 6th Edition - Thunderwolf Cavalry. In my last post I talked about tanking in 40K i.e. using 2+ save models at the front of units to soak up damage. In this discussion I briefly touched on thunderwolves as an example. In this post I thought I'd take a look at thunderwolves in a bit more depth to study how they've changed in 6th edition. As regular readers will know I'm a bit fan of thunderwolves. Www.borsoft.net/ilbastione/download/gw/ac_rules.pdf. 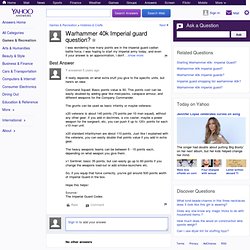 This points cost can be easily doubled by adding gear like med-packs, carapace armour, and different weapons for the Company Commander. The grunts can be used as basic infantry or maybe veterans: x20 veterans is about 140 points (70 points per 10 man squad), without any other gear. PaperHammer 40k. Ciaphas Cain. Space Marines. Buildings. Paperhammer40k - www. This article was last updated on: 08/29/2008Updates at the end of the article, before the download section. In the beginning, when the Emperor was young, Warhammer 40kwas known as Rogues Trader and Games Workshop actually encourage hobbyist to make their own models...